Flashback to 2018 with More Quacks and Cleverness from Wolfgang Warsch 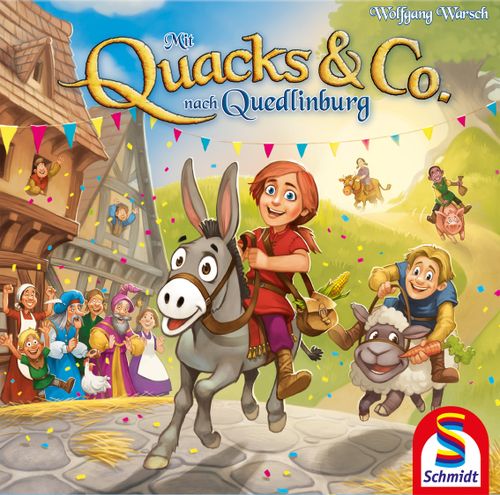 If you pay attention to game awards, you might recall that in 2018 Austrian designer Wolfgang Warsch took half of the Spiel and Kennerspiel des Jahres nominations thanks to The Mind, Ganz schön clever, and The Quacks of Quedlinburg.

In 2019, publisher NSV released a spinoff of Warsch's The Mind — The Mind Extreme — and in 2022 publisher Schmidt Spiele and Warsch will release spinoffs of his two other SdJ-nominated games, with both being aimed at players far younger than the original target audience.

Mit Quacks & Co. nach Quedlinburg ("With Quacks & Co. to Quedlinburg") is a racing game for players aged 6 and up, with you trying to dig the right food from your bag so that your mount will move forward instead of standing in place like a dope. Here's my summary of the German rules:
Quote:
It's race day in Quedlinburg, and with the right combination of food and luck, you will ride your mount to victory and claim the golden cauldron.

Mit Quacks & Co. nach Quedlinburg features similar gameplay to The Quacks of Quedlinburg, with each player building their own bag of tokens over the course of play, then drawing those tokens to try to further themselves to victory.

Each player starts the game with their mount at the start of the racetrack and a bag that contains four dream tokens, a yellow 1 token, two red 1 tokens, and a red 2 token. On a turn, you draw a token from your bag, then place it on your animal board. If you draw a colored token, place the token on your animal board, advance your animal on the track as many spaces as the number on the token, then carry out the effect of that color: red tokens earn you 1-3 rubies, yellow tokens let you roll a die for a random bonus, green tokens let you take another turn or return a drawn token to your bag, and blue chips let you move extra or upgrade a token.

If you draw a dream token, place it on one of the clouds on your animal board. After you draw and place a third dream token, use all the rubies on your board to buy new tokens — no two being the same color, mind you — then place these new tokens and all previously drawn tokens in your bag. Keep taking turns until someone reaches the end of the track and wins!

Mit Quacks & Co. nach Quedlinburg includes a double-sided game board for a shorter or longer race; orange and purple tokens that provide new powers, such as advancing as many spaces as the number of rubies you have; and double-sided action boards for each type of colored token, allowing you to play with different sets of actions from game to game. 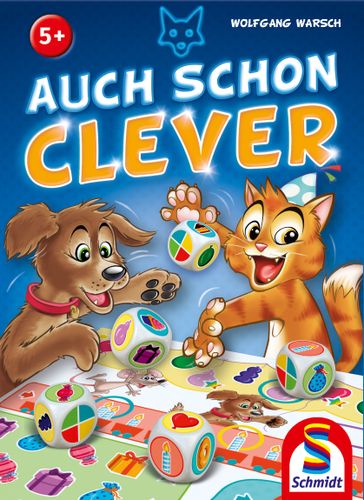 The other title due out from this designer/publisher combo in early 2022 is Auch schon clever ("Also clever"), with this game being targeted at players aged 5+. As such, your ability to combo in this design is vastly scaled down from the original game, but the same principles are at work here:
Quote:
You want to get your hands on everything you can at the birthday party: balloons, gifts, candles, and mountains of sweets! Will you be able to grab more than all the other partygoers?

Auch schon clever features gameplay similar to Ganz schön clever, with one player rolling dice on their turn, then choosing what they want while everyone else gets something from what's left behind.

On your turn, roll the five dice. The faces of these dice show a joker symbol or an icon on one of four colored backgrounds. Choose all the dice of one background color, taking any jokers at the same time, then use the symbols on these die faces to mark off items in this colored area of your score sheet:

—Balloons are in the yellow area, for example, and you must mark them off left to right: red, blue, green, lilac, blue, etc.
—For the train of candles in the orange area, you must have as many candles as are on the next train car in order to mark it out.
—Gifts in the green area can be marked off in any order.
—Sweets in the blue area are depicted in pairs in rows — doughnuts, cake, cupcakes — and you mark spaces in a row left to right as long as you have a pair of matching sweets on the dice.

If you can't use a die that you took, e.g., you took red, blue and lilac balloons and could mark off only the first two, then you must return the unused dice to any others left behind. Each other player then chooses dice of a single background color — and players can choose the same or different colors — and marks off what they can.

If you mark off a circled item or a row of gifts next to a circle, you can immediately cross off an item in the section of the same color as that circle. Crossing off this item might give you another bonus!

When a player marks off all items in one area, the game ends at the conclusion of that turn. Various items or rows that you complete have rainbow stars connected to them, and whoever collects the most rainbow stars wins!