Escape the Wandering Towers, and Push People Around 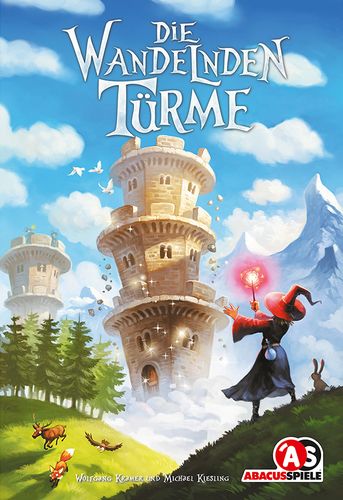 As far as I can tell, German publisher ABACUSSPIELE has only one new title in its catalog for the first half of 2022 — a family game from the famed design team of Wolfgang Kramer and Michael Kiesling titled Die wandelnden Türme, or "The Wandering Towers".

Here's an overview of this 2-6 player game that appears to be scheduled for release in March 2022:
Quote:
In Die wandelnden Türme, you want to bring all of your wizards home to the raven castle before anyone else.

To set up the game, place the game board tiles into a circle, the raven castle on its starting space, and the nine towers clockwise from the castle; five towers have a raven shield on them. Distribute the players' wizards — 3-5 based on the player count — on the towers, and deal each player a hand of three cards.

On a turn, play a movement card from your hand, then play a second movement card, then refill your hand to three cards. Cards allow you to move one of your wizards, a tower, or either a tower or wizard. Movement is always clockwise; sometimes movement is a specific number of spaces, and sometimes it's determined by a die roll, with you being able to roll the die up to the number of times shown on your card.

When you a move a tower, any wizards on that tower are carried forward on it — and you can move a tower on top of another tower, trapping any wizards on that lower tower. When you trap one or more wizards, you fill one of your magic flasks; you must fill all of your flasks in order to win. Additionally, you can spend filled flasks to cast one of the magic spells active in the game, with the basic ones allowing you to move a wizard or tower. (Spent flasks still count as filled.) To free your wizard, you must move the top part of the tower away. 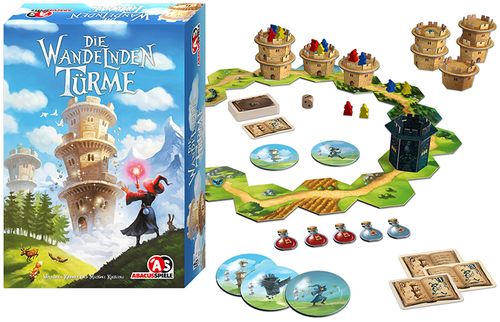 Die wandelnden Türme can be played in teams, with or without a "master wizard" variant that makes lots of spells available.
Gameplay is not at all similar to Kramer and Kiesling's classic game That's Life!, but the games seem to be driven by a similar spirit, with you relying on a mixture of luck and planning for movement, while trying to spite others as much as possible.

• A new-ish title from ABACUSSPIELE is the 2021 release Rabauken ("Bullies"), which comes from designer/artist Reinhold Wittig through his Edition Perlhuhn publishing company. Wittig and ABACUSSPIELE have partnered multiple times, as with Piratenbillard, Das Spiel, and Cordoba, which is available in limited supply from ABACUSSPIELE.

Like many of Wittig's designs, Rabauken seems as much art project as game. Here's how it works:
Quote:
In Rabauken, you need to keep things moving because if your ball stops, everyone else gets rewarded.

To set up, place the round wooden board on the table. Each player receives a flat block of wood, a wooden tower with a bowl carved in the top of it, and a glass ball. Each player in turn places their block on the board, with their tower fitting into a hole in this block and their ball placed on top of their tower. 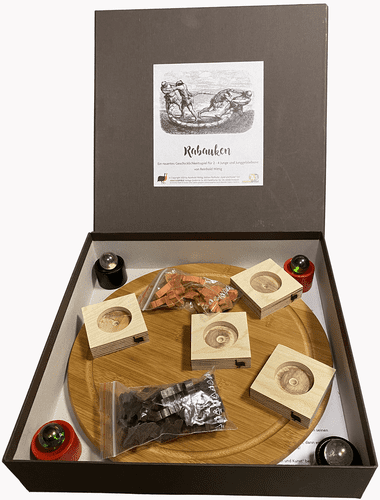 Once everyone is ready, play begins, with each player in turn using a finger to push their block toward the blocks of other players. If you knock someone else's block off the board or dislodge their ball without yours falling out, then you receive a boar token as a reward. If you dislodge your own ball or you take too long and your ball comes to rest inside your tower, each other player receives a pig token as a punishment to you.

When someone scores, reset the board, then start a new round with the player to the left of the previous starting player.