Embrace Your Dark Side in Star Wars Villainous

Patron Badge for 2004 through 2022
Ravensburger has announced a new title in its enormously successful Villainous franchise — Star Wars Villainous: Power of the Dark Side, with this standalone game for 2-4 players due out in August 2022. 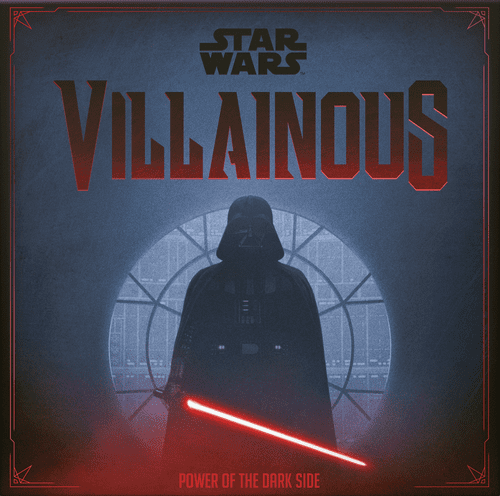 Here's an overview of the game:
Quote:
In Star Wars Villainous: Power of the Dark Side, each player takes control of one of five Star Wars characters: Darth Vader, Asajj Ventress, Kylo Ren, Moff Gideon, or General Grievous. Each player has their own villain deck, fate deck, player board, and 3D character.

Darth Vader's sector board
On a turn, the active player moves their character to a different location on their player board, takes one or more of the actions visible on that space (often by playing cards from their hand), then refills their hand to four cards. Cards are allies, items, effects, and other things. You need to use your cards to fulfill your unique win condition.

One of the actions allows you to choose another player, draw two cards from that player's fate deck, then play one of them on that player's board, covering two of the four action spaces on one of that player's locations. The fate deck contains heroes, items, and effects from that villain's storyline, and these cards allow other players to mess with that particular villain. 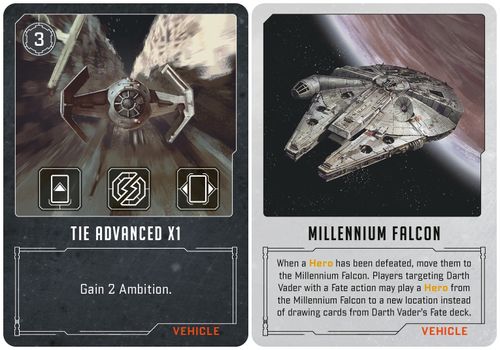 Sample villain and fate cards
Depending on their villain's unique power, players can also use their villain's "ambition" to perform actions that power effects based on the villain's use of the Force, strategic leadership, or sheer luck. The game also incorporates villain-specific missions and rules for iconic ships and transports from all corners of the Star Wars galaxy.
Here's an excerpt from the press release announcing this title:
Quote:
"Star Wars is one of my favorite properties and has been for decades," says Mike Mulvihill, Game Developer and Villainous Lead at Ravensburger. "We're particularly excited to bring the iconic Star Wars ships into the game. These 'Vehicle' cards introduce new actions to each Villain's sector and can engage with each other."

The sculptural game pieces included in Villainous games continue to be a focus in the Star Wars Villainous iteration. Made of the same durable material as other Villainous pieces, each mover includes flecks of another color within the mold.

"Star Wars has such a unique, weathered design that is inherent to the property. Props in the film often have a distressed, battle-worn aesthetic," says Jake Breish, Art Director for the Villainous line. "We wanted this Star Wars-themed Villainous game to capture that same feeling with these deliberate imperfections, which also ensures each mover is completely unique."