Now I've gone back to my usual format where I explore a single topic in games, books, films, and whatever else I can find. The Spanish-American War is similar to a lot of topics I've dived into--it's something I felt like I knew something about, but not too much. Also matching the pattern, it's been a subject I thought would be rather small and self-contained...only to find out it has larger implications and resonances to today's world. I swear, that just keeps on happening.

Probably like a lot of people, when I think of the SAW I think of Teddy Roosevelt and the Rough Riders, "Remember the Maine," San Juan Hill, and Cuba. Other topics might come to me if I concentrated on it, but not as readily: the Philippines, American imperialism, Yellow Journalism, Puerto Rico, and the US Navy. I think Cuba's much longer internal struggle for independence was largely unknown to me. 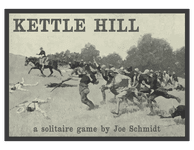 In this Part 1 episode, I close by giving a quick rundown of the games in my geeklist on the subject, many of which I have played or will play by the time I record Part 2 to conclude the topic. However, the beginning of this podcast features a full interview with designer Joe Schmidt. Joe caught my attention when his little game Kettle Hill was about the Rough Riders' and Buffalo Soldiers' famous assault that was part of the Santiago campaign in the SAW. What's more, Joe won the Charles S Roberts award for the Amateur/Print-and-Play category. As you'll hear, Joe designed Kettle Hill as a PNP title during the coronavirus pandemic as a way of doing something for the hobby. I'm glad the hobby recognized him in return.

Joe has a few games with a distinct aesthetic, both in small footprint and graphic design. He's also got several other projects in various stages of completion, such as his collaboration with other designers for the French Resistance game In The Shadows, which has already made the cut with GMT's P500 system. There's another title that will be of special interest to fans of the Levy & Campaign series that started with Nevsky. I didn't even realize it until after I switched off the recorder, but Joe was giving me a scoop for his new game in that series! Just like when Volko gave me a scoop for Nevsky back in episode 14.2! Wow, I'm a journalist!