Morten’s guide to the States of Siege series – part 8: Sidetracks

Patron Badge for 2011 through 2022
Israeli Independence had five tracks for the enemy armies and that was basically it. Soviet Dawn expanded this by adding a non-enemy-army sidetrack representing the political power of the communists. If the counter on this track goes to one end, you immediately lose and if it goes to the other, you immediately win.

In some ways it’s like the normal tracks: 1 token moves along it, event cards can affect it, you can push it in the favorable direction by spending an action to make a die to roll and compare to a threshold number, and you lose if it reaches one end. All features of the normal tracks.

It’s a different in how it regresses, though, and the fact that you can win by getting to one end of the track is an important difference compared to the normal tracks.

In addition to this, the 7-space on the political track triggers deactivation of one of the enemy armies, which reactivates should you fall below 7.

Preliminary table of contents for the series 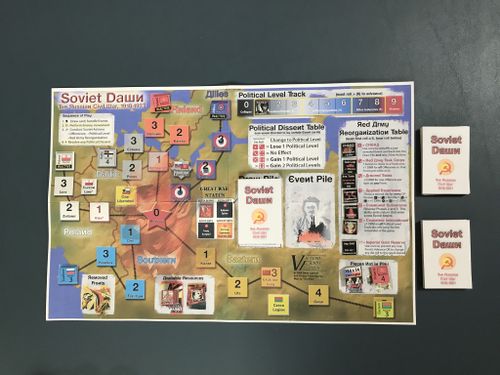 The first sidetrack of the States of Siege series in the upper right corner of the Soviet Dawn board. Image credit Robert Carroll.

The Lost Cause has three sidetracks one of which can make you lose. It cannot make you win, though, but the tracks have functions beyond that such as determining how well you can circumvent a naval blockade.

The game has a small twist that I don’t think any of the other games have replicated: A token can be placed on one of the tracks to make it one space shorter, which represents the European powers assisting the Confederates (controlled by the player) in the American civil war and makes handling the naval blockade easier.

Empires in America expansion, put side-tracks on cards representing army leaders with each card having a track for the leader’s reputation and another for the number of battalions under their command. These tracks don’t trigger the end of the game, but if they can cause the leader and the army to be removed from the game. A major advantage of putting these tracks on cards is that you can have many of them and they can vary. 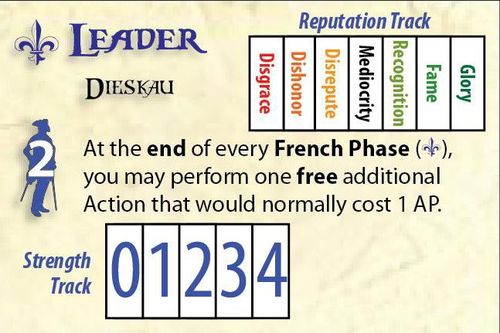 Legions of Darkness moved tracks like these back onto the board, but instead of representing one out of many armies they represent the general army in the form of three tracks that show how many archers, men-at-arms, and priests you have left in your army and thus how powerful your attacks are.

Taking a step back in the timeline, Levée en Masse did something interesting with sidetracks: It had one for the power and public support of each of three systems of government: Monarchy, despotism, and republic. The tracks interact in Levée: If the monarchy track is higher than the republic track, then a negative modifier is applied to the attacks you make and vice-versa.

This leads to some interesting trade-off decisions, but it also opens the game up to abuse from mathematically inclined players. I’ll likely talk about that in an upcoming post.

A different 3-track system was created for We Must Tell the Emperor. You lose if all three go to their lowest space at the same time, but their main effect is to give you bonuses that trigger for each track that is on its highest space, which can lead to some tough decisions between spending your action on taking care of a current threat or playing the long game of repeatedly gaining the side-track bonuses after investing multiple actions in them. 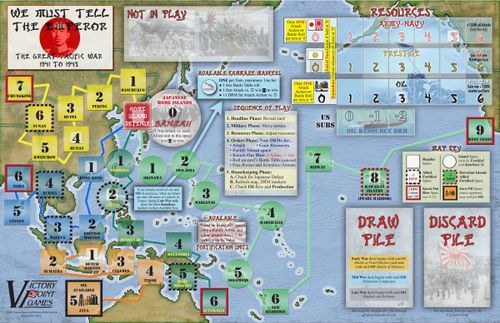 * If the token on the Army-Navy track is on the rightmost space during the first phase of the game, the player gains a +1 die roll modifier when attacking.
* For the Prestige track the player instead gets a reroll each turn.
* On the oil track the rightmost space grants the player a +1 die roll modifier token that can be placed on an enemy army or a fortification.
* The tracks spill over into each other when regressing: If you’re to regress on a track that’s already at the leftmost end, you instead regress on another track.
* If both the Army-navy and the Prestige tracks are at the leftmost end, then you lose the game.

These extra tracks add several options to the strategic space of the game and adds some variety to a game that otherwise is a bit more locked down than most of the other SoS games.

A sidetrack that was more interesting in theory than practice

On the face of it this seems like a bad option because why would you spend one action to maybe get one action? Well, there are at least two ways it can make sense:

1) If you have surplus actions in a turn that have no good use, then you can store them at a loss in the supply track. It could be considered a battery for actions

. Having surplus actions is rare, though

2) If you expect to be in a position later on where you’ll have better die roll modifiers than you have now, then the actions will be more likely to succeed at that time, but the risk of not succeeding with storing the actions tends to make the math not work out favorably.

IIRC I barely did more than keep the supply track above the penalty of the far-left side.

There are a couple of downsides of the sidetracks:

1) They open some of the games up to abuse by players who ignore the theme and apply ruthless math and as I’ll probably talk about in a future post, I think that Levée en Masse is broken and IIRC it’s caused by a mix of sidetrack math and abuse of another system.

2) They can lead to snowballing issues, where if you get a good start and get to the bonus levels on the sidetracks, you’ll be in an even better position, which makes it easier to stay in the advantageous position and so success breeds success. This seems right, since the games have simulationish and historical aspirations, but it’s less good from a balance perspective.

So, if you care more about “realism” and storytelling than perfect balance, then this is the right way to go, but if you care more about tight balance, then the success breeds success factor can be an issue but it’s not be as bad as I might have made it out to be, since your position in these situations tend to be very fragile and in most of the games you can go to hell in a handbasket within a few turns.

In at least one case sidetracks evolved into something more: Dawn of the Zeds 1st and 2nd edition have a side-track for tracking progress in researching an antidote to the zombie disease and a superweapon for use in the zombie apocalypse. 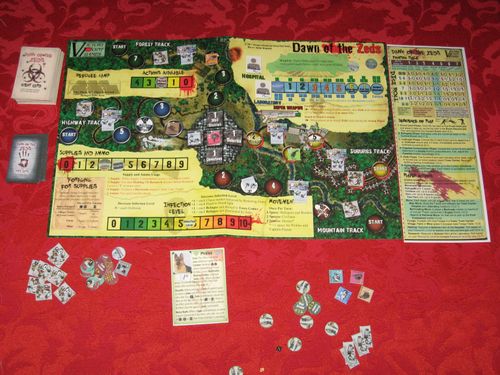 The research track in the upper right corner of the Dawn of the Zeds 1st edition board. Image credit GeekInsight.

The 3rd edition took this track and turned it into a deck of cards that has some randomization and events, which makes it much more interesting, but also ups the complexity and setup time a bit.

Some of the research cards in Dawn of the Zeds 3rd edition. Image credit N/A.

The next part of the series will be about the mini-games embedded in several of the SoS games. Given my spotty publication pace of this blogpost series, I’m not making any promises about whether it’ll be ready tomorrow or sometime after I retire