Patron Badge for 2011 through 2022
With the 8th States of Siege game, Ottoman Sunset, a new feature was added that influenced several of the later games in the series: Embedded minigames. As with most other things in life we’re of course not talking about a clear binary distinction and some features of earlier SoS games could be argued to be minigames, but I think that Ottoman Sunset was the first game that had a minigame which stops the main game flow for a while to play out a minigame with its own set of rules.


Preliminary table of contents for the series

The Ottoman Sunset minigame is triggered when an event card, “Forcing of The Narrows”, is drawn. Before that you can spend actions to build defenses along the coast on the map of the minigame.

When the “Forcing the Narrows” card is drawn the British navy sails towards Constantinople, which is your base in the game. The main game is put on pause and the British invasion attempt is played out as a small minigame where each of the defensive positions you’ve built along the coast allows you to take a d6 roll to damage the British navy. If you don’t do sufficient damage Constantinople falls and you immediately lose the game. 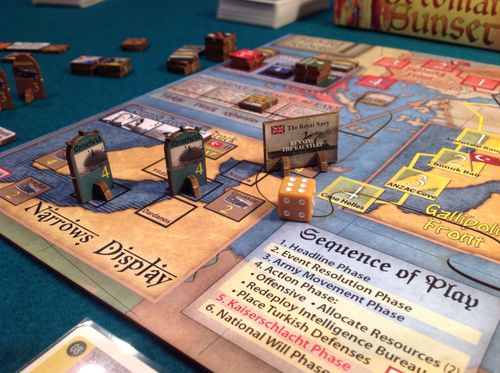 As you might imagine this creates tense moments and tough push your luck decisions each turn until the trigger of the event about whether you should build up your coastal defenses or spend the actions on other parts of the game. The minigame itself is also full of tension because it’s a short series of die rolls that determines whether you lose the game.

On the other hand, once the minigame starts you have no decisions to make, your job is simply to roll the die and see what happens, which will be frustrating to some players.

From a perspective of storytelling the “Forcing the Narrows” event should be the last event of the game because it would give it a tense and climatic end. Instead, we get this climax at a random time during the middle of the game, which feels weird and it means that the tension and number of interesting decisions can go down mid-game.

This criticism misses the mark, though, if we approach the game from the perspective of the designer, Darin Leviloff, whose intent with the game almost certainly to base the game on the history of the Ottoman empire in the first world war instead of creating a Hollywood showdown-based story arc

Zooming in on a battle

We Must Tell the Emperor has a minigame, it’s so simple that it’s arguable whether it qualifies as even a microgame that handles specific battles in the Pacific theater of World War II.

The impact of these battles on the main game are small they’re more of a thematic element than a gaming element, because mathematically it rarely makes sense to spend an action on engaging, so I almost always ignored them and spent my actions elsewhere. On the other hand, they can work as a small Hail Mary mechanism if you’re in trouble.

Each entry on this list is an important battle in the war, which isn’t handled by the main game and instead plays out as a somewhat separate microgame. Image credit Dampenon Fabien.

Malta Besieged by the same designer took the small side-battle system of its older sibling and expanded it to span three phases of a turn. This minigame represents convoys that you must defend against attacks. Once more giving you a trade-off decision between spending your actions on the main game or on saving your supply convoys, which gives you resources and keeps morale up.

Contrary to the We Must Tell the Emperor battles, these often make mathematical sense – once again, assuming that my math and memory are up to the task

Cruel Necessity takes the concept of off-board minigames and expands it significantly. I discussed this in the section on combat systems in part 5 of the series. If you remember what I wrote there you can skip ahead to the next section, otherwise you can continue reading.

While in most cases Cruel Necessity uses the tried-and-true 1d6 win/lose combat system, it also resolves some of the most important battles of the English civil wars with a minigame with its own rules and its own sideboard. This minigame directly influences army positions on the board. 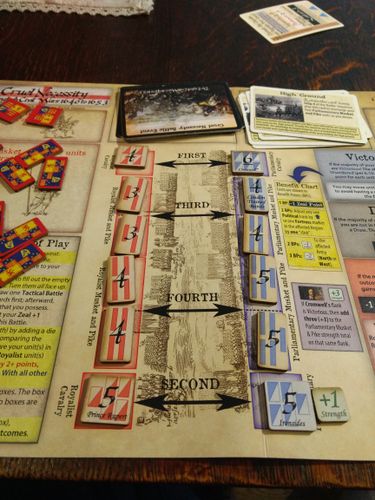 It’s the most complex of the minigames in the series and it takes a couple of minutes each time. While it’s a one-turn game, troops carry over to future battles if they survive, which ups the tension (new units are added occasionally by event cards).

In this minigame you draw 6 counters for your own army and 6 for your enemy. These counters represent parts of your army and they’re drawn from a pool of units that changes over time. The units face off in combat pair by pair and at the end the outcome of the full battle is based on who won the most of the six combats.

This system makes these battles feel special which helps make the theme come alive. The number of decisions you make and the impact they have is fairly limited compared to the amount of time the minigame takes, so I like the idea more than the execution.

Still, I prefer to play Cruel Necessity with the minigame to playing without it, even though there’s a variant in the rulebook for leaving it out. This is because of the feel it brings to the game and because it shakes up the formula – the latter being less important to those who haven’t played as many of the SoS games as I have.

All of the above games mainly take place during one turn, but some games go beyond that and have minigames that spans multiple turns. The first game that did this was Keep Up the Fire!.

That game is not only the first to have a proper multi-turn minigame it also takes its minigame to a higher level than previous games and the minigame approaches being an actual game in its own right and it runs through the full duration of the game.

In the main game you play as representatives of the Western Imperialist powers in Peking (Beijing) of 1900. They’re holed-up in a compound while being attacked by overwhelming Chinese forces. Your goal there is to hang on in a typical States of Siege situation until an army, called the Relief Column, comes to your rescue.

The minigame is about the Relief Column fighting its way to Peking. If you fail to arrive in time, then you lose the game.

The two games don’t interact all that much but it’s interesting in our context because it’s a much larger part of the full game than previous minigames in the series and because it goes on for the full duration of the game. 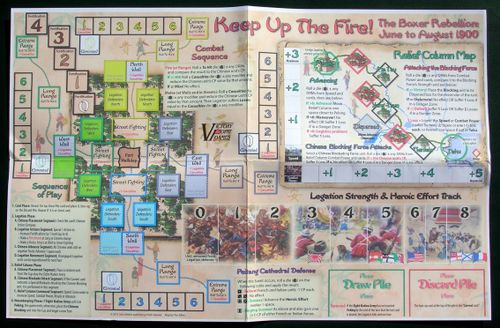 The main game on the left and the Relief Column minigame in the top right corner. Image credit C Hansen.

Like the Forcing the Narrows minigame of Ottoman Sunset and the battles of Cruel Necessity, the Relief Column minigame has little player agency and instead luck plays a major role.

Dawn of the Zeds (2nd edition) took the idea of the relief army in Keep Up the Fire! and integrated it into the last turns of the game itself. So instead of having a separate minigame with its own separate part of the game board and its own rules, Dawn of the Zeds placed its relief army (the National Guard) on the board itself and let it march under the player’s control towards the central base in the same way that any other player-controlled unit can.

The two different ways of handling a relief army this had significant impact on the thematic feel and mechanic play of the game:

1) Having it as two separate games as in Keep Up the Fire! makes it feel like it’s two separate things in the game/real world that doesn’t impact each other until the relief army arrives at the base the player defends in the main game - if it arrives at all. AFAIK this matches the reality of the situation well.

On the other hand, it’s somewhat undermined by the player having to prioritize between which of the two games to assign a shared pool of actions to and I didn’t get the feel that the relief army actually ends up being present in the area around the base, because it doesn’t interact with anything there, which I’m guessing sort of reflects the reality of the army being large enough to simply wipe out or scare away the attackers but my lack of historical knowledge leaves that as pure guesswork.

2) Putting the relief army on one of the main game tracks in Dawn of the Zeds gives the feel that the army is actually moving in the same geographic area as the area the player is defending, which it would do in the real-life events being simulated. OK, “real-life” might not be the best term for a game about a zombie apocalypse, but you get what I mean

Since you control the Dawn of the Zeds relief army following the same rules as any other player unit in the game, the dominance of luck in Keep Up the Fire! is replaced by as much player agency as there is in the main Dawn of the Zeds game.

Having a full game as a minigame

As mentioned above, the minigame in Keep Up the Fire! play for the full extent of the game time and the difference in complexity between main game and minigame is much smaller than in any of the other minigames in the series, so they’re approaching the territory of being two separate games joined by action sharing and end game success criteria.

Ottoman Sunset 2nd edition and Hapsburg Eclipse took this all the way by having a game mode that joins the two, so that they’re played in parallel with a mechanism tying them together. I have neither tried this nor read the rules, so unfortunately, I can’t go into this unique feature.

The next post in this series covers one of the aspects of the games that are most interesting to me: The action economy. It’ll likely be the most complicated of all the posts but it’s important if you want to understand the underpinnings of the games.