Patron Badge for 2004 through 2022
• I meant to cover Kinfire Chronicles: Night's Fall months ago, but I wasn't even sure how to approach the topic initially given that a press release on new publisher Incredible Dream Studios started like this:
Quote:
Incredible Dream, the next-gen entertainment studio modernizing tabletop games for people who crave shared escape, announced today its leadership team and initial product, alongside a $2M Seed round led by General Catalyst. The company is developing original fantasy worlds, characters, games, and transmedia experiences for digital natives who aspire to meet in person.

General Catalyst, by the way, is "an American venture capital firm focused on early stage and growth investments", and I feel like I'm far out of my comfort zone when writing about such things. I'm more comfortable thinking about "game designer wants to make cool thing" than parsing out what "transmedia experiences" might consist of.

In any case, here's an overview of the game, which lists Kevin Wilson as head designer and Darrell Hardy and Brandon Perdue as co-designers:
Quote:
In Kinfire Chronicles: Night's Fall, a 1-4 player co-operative, quest-based RPG board game, players take on the role of seekers, adventurers who are fighting to push back the darkness threatening to change and destroy the world of Atios. The game plays as a campaign of 15+ quests, and each quest takes an average of 45-60 minutes to complete. Within each quest, players can expect to make choices related to adventures, battles, NPCs to speak to, and more. These choices create a branching story in the game, allowing the entire campaign to be replayable. 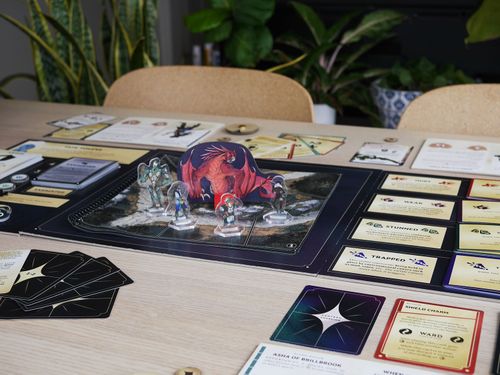 Each quest has three phases: adventuring, battle, and exploration. In the adventuring phase, players make choices based on options presented on the quest cards and need to accomplish something (such as crossing a river or chasing down a suspect) by flipping the correct number and color of cards from their decks. In the battle phase, players work together to defeat enemies on a physical battle map. Turns are determined by drawing chits out of the destiny bag, with each enemy having numbered tokens that correspond with different attacks and actions. Players may play action cards on their own turns to do damage and can play boost cards on other players' turns to do things like reduce damage, move players, or even return a drawn chit to the destiny bag for redraw. The game doesn't end if an objective isn't achieved or an enemy defeats the heroes, but it will affect later gameplay and choice options. Lastly, on certain quests players can return to the city in the exploration phase to speak to NPCs, purchase items, and level up their decks.

Woven throughout each of these phases are cards that require you to make a choice, such as resting before moving on or charging into battle, or whether or not to spare someone's life. The characters in the game have their own set of morals and standards, and playing according to your character can earn you Kinfire tokens that help you level up. Ultimately though, the decisions you make are yours alone.
Incredible Dream has also released a teaser trailer ahead of its August 9, 2022 Kickstarter campaign:


• In January 2021, Candice Harris wrote about two forthcoming titles from Mark Chaplin and his Giant Spider Games brand. One of those games — Where Humans Don't Belong — now has a preview Kickstarter page, and Chaplin plans to launch a KS campaign before the end of 2022.

Here's an overview of the game in case this is your first time hearing about it:
Quote:
Where Humans Don't Belong is a deep space exploration game in which you are trying to escape the unknown galaxy into which your damaged starship has been thrust. Explore uncharted space, board derelict freighters, land on ringworlds and other amazing locations — all while being hunted by an alien dreadnought intent on your destruction. The fate of your ship and her crew lies in your hands! 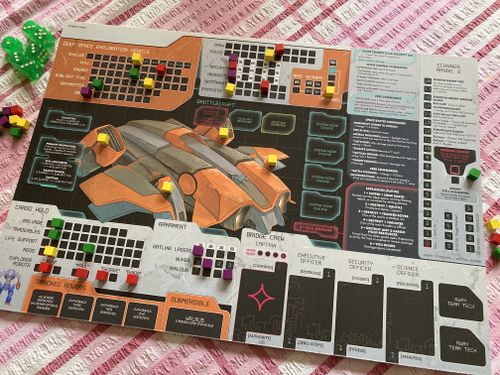 Starship control board set-up without crew and initial tech
At the start of the game, you name your ship, choose its loadout, and pick the bridge crew. They will encounter awesome galactic horrors and fight battles in space as well as on the surfaces of strange alien planets. The game features a negotiation system so that you can attempt to talk your way out of sticky situations, rather than always relying on your fusion pistol sidearm, although that might be an option as well...

The game includes more than thirty maps of derelict starships, ringworlds, and exoplanet surfaces, and while primarily a solitaire game, Where Humans Don't Belong also provides rules for a two-player co-operative experience.