Game Overview: Walkie Talkie, or Orange Is the New Black

At GAMA Expo 2022 I played a demo game of Walkie Talkie — a co-operative card game by Shei S. and Isra C. that's part of Devir's new small game line — but surprisingly a game-related event was not really the ideal setting for this design.

Instead I think Walkie Talkie excels in the slot of "game to play in a restaurant after placing your order". One reason for this choice is that the game takes only 30 seconds per player, that is, 1-4 minutes. Even at the fastest Thai restaurant, you'll be able to get in a game or two before your basil fried rice hits the table. What are you doing in this brief span of time? Ridding yourself of cards in hand as quickly as you can. In more detail:
Quote:
Everybody has a hand of six cards; cards have a letter on one side and a color on another, and you have to hold your cards however they're dealt to you. Place one card from the deck letter side up and another color side up. When the timer starts, everybody plays at the same time. You can play a letter on the letter pile as long as you can name something that starts with that letter and that "matches" the current color showing; similarly, you can play a color on the color pile as long as you can name something of that color that starts with the letter atop the letter pile. For example, when playing a "B" card next to a yellow card, you could say "Banana!", and when playing an orange card next to an "L", you could say "Lion!" You can't repeat a word previously given, and you can't name the color of the color card. 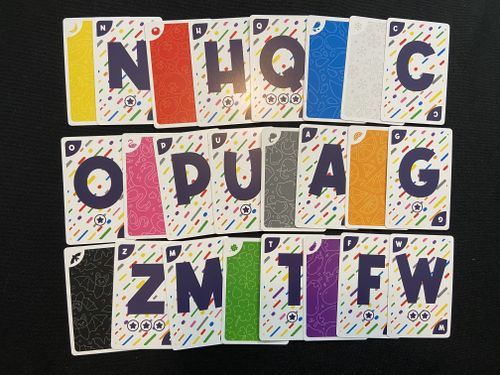 Sample letters and all the colors
Whenever you want, you can say "Roger!", and all players must flip the cards in their hand, so letters become colors and vice versa. Alternatively, you can say "Over!", and players pass their cards to the left.

When time runs out, you gain points equal to the number of stars on played letter cards, then subtract 1 point for each unplayed card. Try to score as many points as you can!
I've now played Walkie Talkie 17 times on a review copy from Devir with player counts from 2-5, and aside from that first demo game, we've always played at least twice in a row. We typically finish with a negative score in our first game, cards stranded in hand because we couldn't think of something pink that starts with any of our letters or something that starts with Z that matches any of our colors. Did we forget to say "Roger!" and give ourselves new options? Yes, we did. (Strangely, we've never said "Over!" in any of our games, and the two commands seem like they should be reversed, with "Over!" making you flip cards.)

Then we shuffle and play again immediately, and we always do better — which makes sense because you start to build a library of red things, of blue things, of green things, etc., and you can find items on those library shelves more easily with practice. Some items feel a bit of a cheat, e.g., "Underwear" because you can have a U with any color and have a match, but it's funny the first time someone says "Underwear", especially when the color is grey, which it was the first time, and after a couple of mentions of underwear, you can decide that you're going to place the underwear back on the shelf and try to think of something else...or not. Your call. 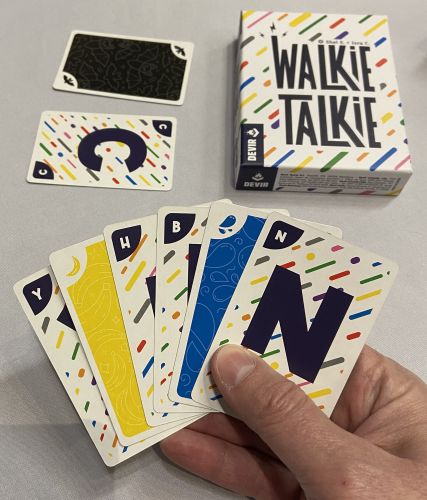 The typeface might have you guessing a few times as with this H third from left
The first few games we found ourselves in a food rut, giving a food answer for almost everything we played, but then I banned myself from naming foods and tried to think of other things. I'm sure our score suffered, but the game doesn't worry too much about scores, not including a chart to consult to show when you score awesome, okay, and mediocre, so I'm not worrying about scores either.

What's of more concern is discovering what people say, especially when they make personal connections on an eye or shirt color or a pet or something far more out there that you never would have considered. My brother looked at E and black and said, "Entropy", and we were all like...yes, that is correct. You can protest a play, and if others protest, the card player must return their card to hand along with another card from either pile, but I've rarely encountered someone trying to cheat a card onto a pile. After all, the goal of playing isn't the score, but making a connection with others and getting a taste of what's going on inside their heads.

For more examples of gameplay, you can check out this overview video, which is twice as long as any game of Walkie Talkie you'll ever play: