Patron Badge for 2004 through 2022
Giant crowdfunding campaigns come around every Tuesday it seems. Oh, look, Return to Dark Tower is back for a second printing and the new Covenant expansion in one of the first campaigns on BackerKit. Euthia: Torment of Resurrection has grossed more than $800,000 in its second go-round on Kickstarter, which also has a new expansion.

But what about tiny games, you ask? Games that will likely be overlooked given their slim, nearly two-dimensional presence? Today we'll look at a few of those, starting with Copperdale from John Clowdus of Small Box Games, who has actually made the box infinitesimal for this project. Non-existent, one might say.

Here's an overview of this solitaire, print-and-play game that requires nothing more than a deck of playing cards, a pencil, a printer, and $4 for this Kickstarter campaign:
Quote:
In Copperdale, you manage and advance the town and inhabitants of Copperdale. After twelve months (turns), you earn medals for the improvements you've made.

Each month, one card at a time, you reveal and assign three cards from the top of the deck to the 1-ECONOMY, 2-INFRASTRUCTURE, and 3-GROWTH segments of the board, in any order you choose. Then, in the above order, you resolve those cards, filling in spaces based on the cards you assigned to each segment.

Each card's suit and value matters, and depending on where you assign it, you fill in spaces on the board. Each space you fill hopefully leads to more medals at the end of the game. From learning occupations to expanding the city's borders, everything you do has the potential to unlock medals! However, with the design having slight rogue-like elements and a bit of press your luck, there's no guarantee you'll ever get the card you want — or that the next card you reveal will be better than the last.
• If you want to manage a town while judging your progress against others, you can turn to Sunshine City from Peter C. Hayward of Coffeebean Games, with this print-and-play design being listed for 1-100 players, although I imagine you could sneak that 101st player to the table without too much more trouble. The game is being crowdfunded on Kickstarter through August 12, 2022, and it works as follows:
Quote:
The future is now! Turn your thriving metropolis into an eco-friendly paradise by upgrading your buildings, creating new technology, and getting support from public and private sectors. 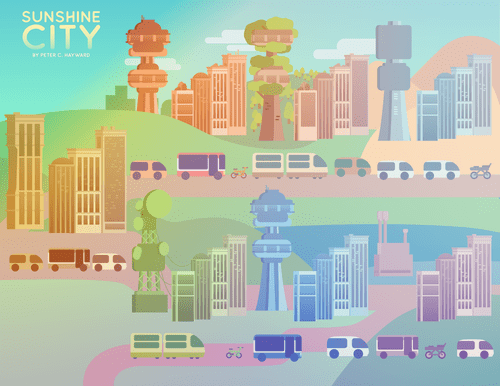 Each turn in Sunshine City, someone rolls two dice. All players then move one of their three workers — builder, inventor, or lobbyist — based on the lower die roll, then a different worker based on the higher die roll, gaining resources in whichever of your city's seven districts they land in. Builders spend resources to increase your city's production, inventors spend resources on special abilities, and lobbyists gain support for projects, which gives access to powerful one-off powers.

The first player to build seven solar farms in their city wins!
• Bagh Chal is a thousand-year-old game, two-player abstract game from Nepal akin to Fox and Geese and similar asymmetric games. One player starts with four tigers on the board, and the other places twenty goats on the board one by one, with a tiger moving after each goat placement. A tiger captures a goat by jumping it, while a goat does nothing on its own but get eaten by the tiger; if, however, the goat player can hem in all the tigers so that they cannot move before five goats have been eaten, then the goat player wins. 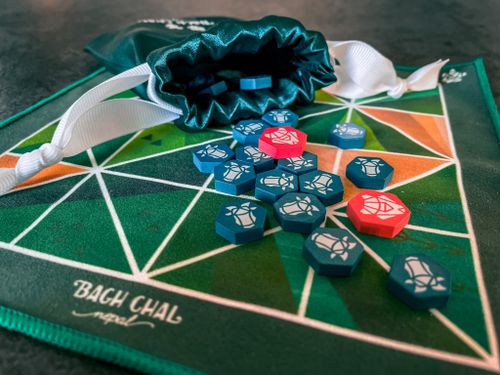 Hungarian publisher Lemery Games ran a pay-what-you-want Kickstarter campaign that ended on July 26, 2022, but you can still pay what you want via the post-KS BackerKit campaign.

• Publisher Metal Snail Idea Workshop has lots of tiny games available on its website, and they aren't even being crowdfunded! What an idea? Who let them into this post?!

The newest Metal Snail release is the solitaire civilization-building game Wheat & Ale from Robin Gibson, the pitch for which is straightforward:
Quote:
On the banks of an ancient river, they gather to grow wheat, brew ale, and accidentally start a civilization. 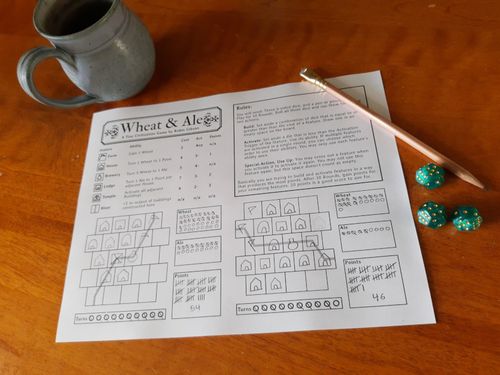 Wheat & Ale is a coffee-break-length non-violent civilization builder you can play with a pencil and three six-sided dice. Combine higher dice to build, and use low dice to activate buildings. Provide food and drink for your population, and build temples to improve production. 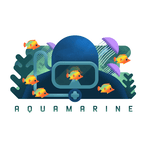 • We'll close this post with Aquamarine, the second offering from Rory Muldoon and Matthew Dunstan of Postmark Games following their 2021 debut Voyages, which I covered here.

Like Voyages and Sunshine City, Aquamarine allows for simultaneous play with any number of people. Maps are available in color or black-and-white to suit your printing preferences, and backing the Kickstarter campaign gives you access to two maps now and future maps as the designers create them. As for the game, it works as follows:
Quote:
Manage your oxygen reserves as you plunge beneath the ocean surface. Will you seek out fish and coral in the narrow sea caves? Or race to be first to reach the ocean floor? Dive deep down into the ocean to discover a vibrant underwater world in Aquamarine. 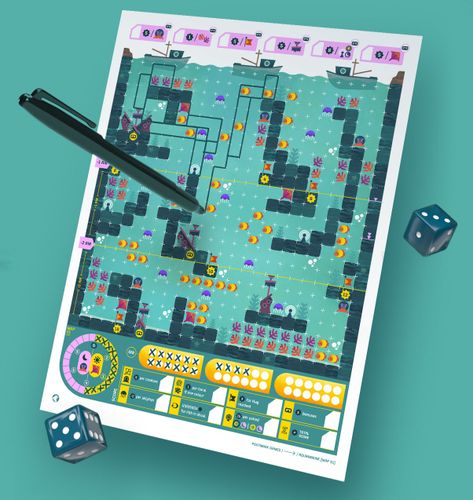 The pen and dice float because you must play underwater
On a turn, roll two dice to be used by all players. Using one of the die results, players mark their game sheets to show the position of their diver. The lower-value die might limit your options, but if you pick the higher value, you must use an amount of O₂ equal to the difference between the two dice. Choosing when to strike out is vital for seeing the most on your limited time beneath the waves!