Release Business Sharks Once Again, and Make Money from Expeditions and Fake Art 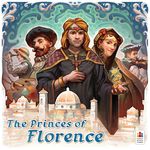 In March 2022, I wrote about a new edition of The Princes of Florence hitting the market courtesy of Korea Boardgames. Turns out that's not the only older game seeing a comeback courtesy of KBG as SPIEL '22 will see the debut of both that Kramer/Ulrich design and a new edition of Henri Jean Vanaise's stock-trading game Shark, which debuted in 1987. Here's an overview of this 2-6 player game:
Quote:
Shark is a stock-trading game slightly reminiscent of Acquire in that abstract play on the game board determines the share values of the various companies. The similarities end there, though, as Shark is more free-wheeling than Acquire. 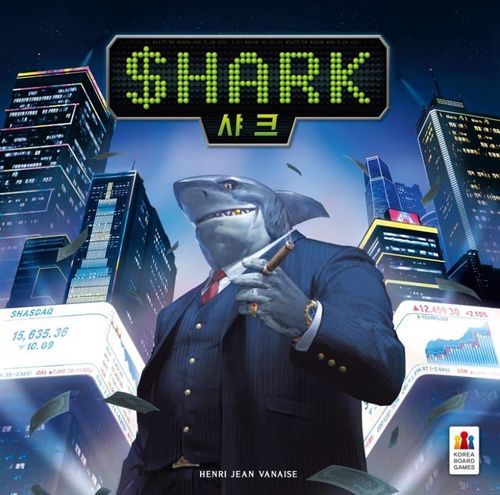 At the start of your turn, you can buy shares (up to five) and sell shares (as many as they want), then you roll dice to determine which of the four company markers you place on the board and in which region. A company marker on its own doesn't contribute to the value of a company; only groups of at least two markers count, so groups of 5, 4, 1, and 1 markers would create a value of $9,000 for each of that company's shares. If you place a marker that combines those two lone markers, then you'd have groups of 5, 4, and 3, so the share price would shoot to $12,000. If you placed that marker on its own, the share price wouldn't change. When you place a marker, you gain money equal to that company's new share price, so you have an incentive to boost a company's size — but all players receive funds equal to the difference between the old share price and new for each share they hold, so are you enriching them more than yourself?

Of course, you can also place a marker to tank a company's share price. When a company's group expands to touch a smaller group, that smaller group is removed from the board, lowering the value of that company's shares (as long as the group had at least two markers) and costing everyone money equal to the loss in value. (Groups of equal size cannot touch, and you cannot place a marker to force a smaller group to touch a larger one.) To end your turn, you can again sell as many shares as you want and buy shares up to the per-turn limit of five. 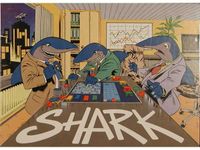 Earlier editions
Removed markers are banished from the game, not returned to the supply. Once all of a company's markers have been used, or a company's share price reaches $15,000, or all of the shares have been sold, the game ends, and players cash out all their shares to see who has the most money.
I'm pleased to see that sharks continue to dress with style as they attempt to dominate our financial institutions. 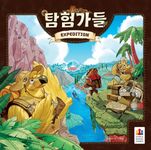 • Other SPIEL '22 releases from Korea Boardgames include two original games from Korean designers. Expedition by Jason Lee is a 1-6 player design in which you're digging for relics on an island, using your first finds to fund the hiring of others to work for you, moving them over a grid of tiles as you play cards. When an expedition member lands on a tile, you flip it for immediate rewards, a dig site that will require additional effort to uncover, or relics that will fuel you toward victory. By returning to base camp, you can buy new cards for your deck.

Fake Art Inc. is a 3-5 player game from designer Ikhwan Kwon that intrigues me due to its general air of messing with everyone else's stuff in order to put money in your pocket. That's not my thing in real life, but making it happen at the game table feels great:
Quote:
For some reason, several portraits from famous painters have poured out into the market. Most of them have to be fakes, but even the experts are having difficulty distinguishing them from the real thing. The price, of course, will vary greatly depending on whether it is assessed to be genuine or not. 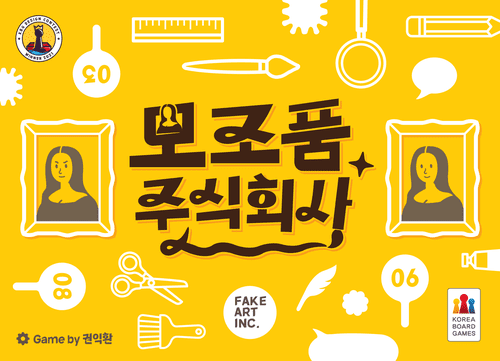 In Fake Art Inc., you are expert brokers who must collect fake masterpieces and distribute them in the market. After all, you need to make a profit. Increase the emotional value of all the art in your collection, and disrupt the market by dropping the appraisal value of other player's art. With the right timing, even an artwork of no value can be sold at a high price to another broker. See how easy it is to make money by selling art?

In more detail, players first decide the turn order by bidding. On their turn, players can either trade their hand with others or place it on a space between players to set up an auction. Cards are placed face down, and equivalent cards are placed down together. You can make money by selling your hand cards, and the price is determined by the number and location of "genuine" and "fake" cards that have been placed down. Players can change the selling price by replacing existing cards.