Master the Forest and Avoid the Turtles at SPIEL '22

Patron Badge for 2004 through 2022
German publisher Clemens Gerhards releases a few high-quality, all-wood games each year, and its newly announced games have now joined more than 1,060 others on BGG's SPIEL '22 Preview.

• WaldMeister is the newest game from Andreas Kuhnekath-Häbler, who also designed Kulami, Micro Robots, and Rukuni, which will always be "the game I played in Florence with my son because we were too tired to do anything else". Funny how games pick up monikers like that...

Anyway, here's how to play this two-player game:
Quote:
In WaldMeister, you want to shape the forest to suit your own ends.

Each player starts the game with 27 pegs, with the pegs coming in three heights and three colors, and with three pegs of each combination, e.g., short and yellow-green. 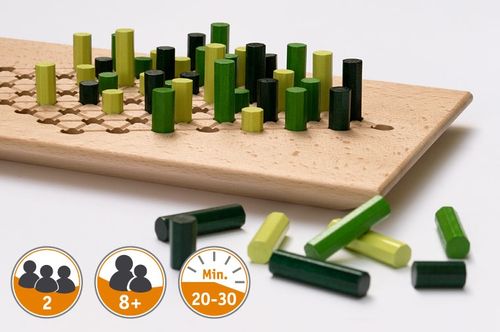 To begin, the first player places one of their pegs in a hole on the game board. On each subsequent turn, the active player chooses any peg on the game board, moves it in a straight line as far as they wish to a new empty hole (not jumping any pegs), then places a peg from their reserve in the hole just vacated.

Once all the pegs have been placed, each player counts the number of pegs in each type of cluster they score, whether short/medium/tall or yellow-green/leaf-green/dark green. The player with the higher sum wins. (The rules suggest playing two games, with players swapping goals since recognizing "height clusters" is more difficult.)
The game board has 64 holes, so not all spaces will be filled at game's end — which means you need to fence in your clusters to keep points from slipping away.

• Marco Teubner's Laniakea features a board-changing mechanism akin to the classic children's game Labyrinth. (Kuhnekath-Häbler's Hollerith⁵ from 2020 also has this tile-sliding feature, albeit with nothing else being similar to this new game.)

Here's how to play:
Quote:
In Laniakea, you want to move across the Hawaiian beach, but you can't disturb the turtles...who keep moving and possibly disrupting your plans.

To set up, place your eight colored tokens on your side of the wooden game board, then select 25 of the 28 domino-style wooden tiles and place 24 of them in the six rows of the game board, four tiles per row. Each tile depicts two sandy spaces, two turtles, or sand and a turtle. 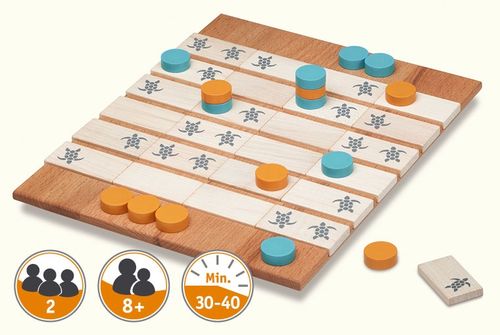 On a turn, first move two of your tokens one space each or one token two spaces. Tokens move orthogonally and can land on other tokens, whether yours or the opponent's, but you can never land on a turtle. After movement, slide the remaining tile into either side of the row where your last-moved token landed, ejecting another tile from the game board. Any tokens on this tile are returned to their respecting starting zone.

Tokens can be stacked up to three high; when a token moves from the top of a stack, it moves 2-3 spaces depending on the height of the stack and can jump turtles while moving.

If a token reaches the opponent's starting zone, it remains there, and the first player to cross the board with five of their tokens wins.
• The final new release from Clemens Gerhards — Sisal from Oliver Schaudt — is a solitaire logic puzzle, so it's not listed in the BGG database, but I include information anyway because I enjoy these puzzles myself and like to talk about them:
Quote:
In Sisal, you're given a pattern of empty spaces in a 4x4 grid and some conditions that must be fulfilled, e.g., a yellow disc to the left of a red one. To solve the puzzle, place the 1 disc in an empty space, then the 2 in the first empty space in an orthogonal direction, then the 3, etc.

Can you place all the discs while also meeting the required patterns? The puzzle comes with 35 challenges. 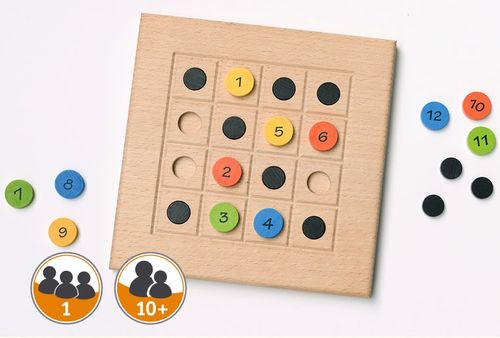