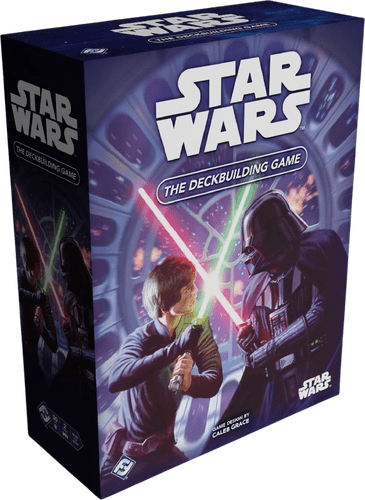 In case you thought that the number of games based on the Star Wars franchise was two short of the ideal number, then you'll be pleased to know that the gap will be filled in 2023.

Star Wars: The Deckbuilding Game, due out in March 2023 from Caleb Grace and Fantasy Flight Games, takes a straightforward approach to the central Star Wars conflict, with two players each trying to eliminate the other as a force in that universe:
Quote:
The Rebel Alliance fights valiantly against the tyranny of the Galactic Empire. Each new victory brings the Rebels hope, and each heroic sacrifice strengthens their resolve. Still, the Empire's resources are vast, and the firepower of its Empire Navy is unmatched. With neither side willing to accept defeat, their war rages across the galaxy...

In Star Wars: The Deckbuilding Game, a head-to-head game for two players, the galaxy-spanning war between the Galactic Empire and the Rebel Alliance comes alive on your tabletop. In this easy-to-learn game, you and your opponent each choose a side, playing as either the Empire or the Rebels, and as the game progresses you both strengthen the power of your starting decks and work to destroy each other's bases. The first player to destroy three of their opponent's bases wins.

In more detail, each player starts with a unique ten-card deck, with seven of those cards providing only resources to acquire new cards. Six cards from a galaxy deck are always on display, with Rebel cards facing the Rebel player, Empire cards the Empire player, and neutral cards turned sideways. You can spend resources to acquire cards in the galaxy row that don't belong to the opponent, and you can use attack power to take out cards that do belong to them, gaining a reward in the process. 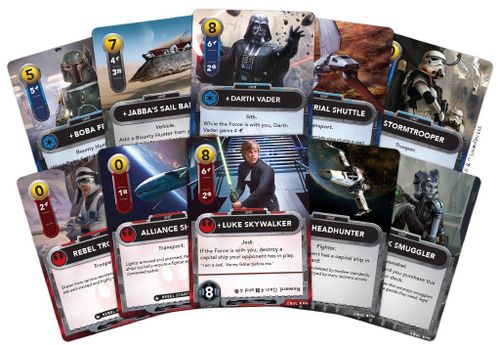 Each player starts with a base that lacks abilities (Dantooine for the Rebels and Lothal for the Empire), but when that base is destroyed, you get to choose a replacement from your base deck, with each base having a special ability. Choose wisely to counter your opponent's plans! In addition to having special abilities, capital ships absorb damage meant for your base.

Players also fight for control of a Force track to gain additional resources or make use of "If the Force is with you..." abilities on their cards.
The other title is Star Wars: Shatterpoint, a two-player miniatures skirmish game from Atomic Mass Games, which also publishes Star Wars: X-Wing (Second Edition) and Star Wars: Legion. Here's an overview of this June 2023 release:
Quote:
Star Wars: Shatterpoint lets players alter the fate of the galaxy from the Core Worlds to the Outer Rim. 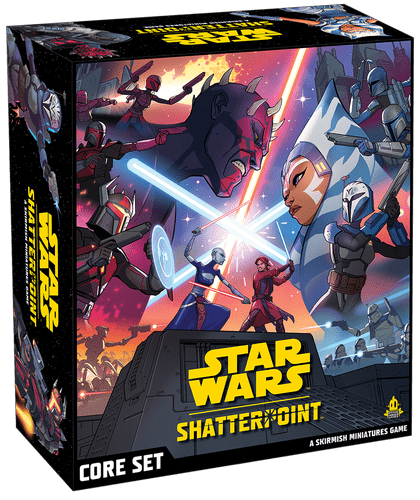 To start, each player builds a strike team of iconic Star Wars characters, whether thematic squads straight from the Star Wars galaxy such as Ahsoka Tano and Bo-Katan Kryze, or Lord Maul and his loyalist super commandos, or a custom squad that's optimized to complete the various mission objectives for the current game. You then pit your squad against another one, using your characters' special abilities and diverse combat skills to control the flow of battle as you race to complete dynamically evolving mission objectives.
And here's a teaser video from Atomic Mass Games that shows off miniatures from the game: