Early 2023 Con Preview Now Live — And Smaller Than Ever! 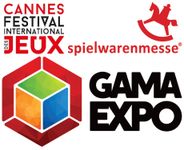 The year 2023 has been underway for close to two weeks, and BGG's Spielwarenmesse/FIJ/GAMA 2023 Convention Preview has been live for a bit longer than that. The list launched with fewer than ten titles on it, and now it contains more than a hundred.

The idea behind the list is to highlight games that will be demoed at Spielwarenmesse 2023, a trade fair in Nürnberg, Germany being held in early February, and GAMA Expo 2023, a trade fair in Reno, Nevada, U.S. in late April, as well as games that will be demoed or sold at International Festival des Jeux in Cannes, France in late February. On top of that, I've included games from a few publishers that will be released at retail in the first half of 2023. I'll be adding to this preview until the end of February 2023, so expect it to grow over the coming weeks.

Normally I'd include games demoed at 2023 NY Toy Fair on this preview, but that show has moved to September, which means we'll likely see most games that would have debuted at that show at Origins, at Gen Con, or in SPIEL previews. (Most publishers who I've asked about the NY Toy Fair move are baffled by the changed show date. We'll see what actually happens when it takes place.)

The intent behind the preview is to highlight titles that will be announced or shown, but possibly not released until later in the year. You can get a sense of what's coming — or in some cases what isn't coming. Several publishers, such as AMIGO and Catch Up Games, have scaled back their release list, with AMIGO offering in the first half of 2023 only two new titles — both spin-offs of existing game lines — while Catch Up plans to release three titles in all of 2023 compared to nine titles in 2022.

On January 7, 2023, designer Nick Bentley from Underdog Games posted a Twitter thread that could shine a light on such decisions:

A lot of board game publishers are currently struggling, including us.

I've heard 12 theories about why.

Thought I'd collect them all in one thread.

Would love to know your reflections.

Rather than quote all the tweets, I'll copy them here:
Quote:
1) Pandemic rebound: folks bought a ton of games during the pandemic (true - our sales more than doubled starting in 2020), so now they're done for a while.

2) Publishers put off publishing games during the pandemic, and are now publishing them, so there's an extra surplus now.

3) The two factors above push supply up and demand down, which is driving low sales per game.

4) Inflation has pushed margins down.

5) Inflation has caused consumers to pull back on certain kinds of discretionary purchases, including board games.

6) The best products have gotten better. Because sales are governed by a power law where the best sellers soak up most of the sales, it's harder to move up the power law curve.

See this excellent essay about the power law.

7) Barriers to entry for publishing board games have dropped, raising the supply/demand ratio.

8) Inflation has eroded people's sense of value of what you get in the box.

9) There's a shift in purchasing toward older, evergreen games. I've heard multiple industry people say this, but don't know how to confirm. I'll note our most evergreen game has been least hit.

10) Shipping logistics have been difficult and expensive for some time.

11) The pandemic sales spike made publishers overconfident, and they took on more overhead than they should have, which is now a burden (guilty)

12) Asmodee throwing its consolidated weight around. I don't buy it, but I've heard it, so including it for completeness.

This is grapevine hearsay, so grain of salt, but if true, that might tell us something.


Lots of people have responded to Bentley's tweets with comments about where they fall among these reasons, so you might be curious to check them out. Feel free to comment here as well. I mean, sure, it's meaningful on a large scale to think that instead of, say, a thousand games on BGG's SPIEL '23 Preview we might have only eight hundred — but does that really change anything for you personally? Do you try to stay abreast of the market at large, or do you follow only a few designers or publishers and blank out everything else?