Build a Well-Rounded Mind Space, Enter the World of Couture, and Don't Let Your Dinos Get Chomped

U.S. game publisher BoardGameTables.com has changed its name to Allplay, which is probably a good move given that its product line branched out from being solely board game tables many years ago.

In a press release, company founder Chad DeShon wrote:
Quote:
We are fully committed to supporting and expanding all our product lines [tables, games, accessories, and shelves]. The word "tables" in our name was causing people to think that our non-table offerings were just side projects and that we weren't serious about them. Allplay better reflects what we are trying to do going forward.

We want families, friends, and even strangers to play games together. It is a fantastic way to start and grow relationships. Allplay can be there for every part of game night. We're going to continue to focus on games that are easy to teach, but still have layers of strategy.
Along those lines, the three titles that BoardGameTables.com crowdfunded in Q4 2022 — Pollen, Big Top, and Roll to the Top: Journeys — will be released with the Allplay logo. DeShon expects to fulfill the crowdfunding campaign in April 2023, after which the games will be available from Allplay directly or via Amazon, with retailers being able to purchase stock directly from the publisher. In 2024, these games will enter distribution via Asmodee. 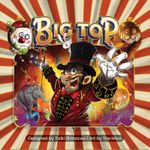 • In addition, Allplay has four other titles planned for release in 2023, three of them being new editions of games that first appeared in Japan. Mind Space, for example, debuted in 2019 from designer Shimamuranao and publisher ハレルヤロックボーイ (Hallelujah Rockboy) as 四畳半ペーパー賽系 ("Four-and-a-half Tatami Mat Galaxy"). 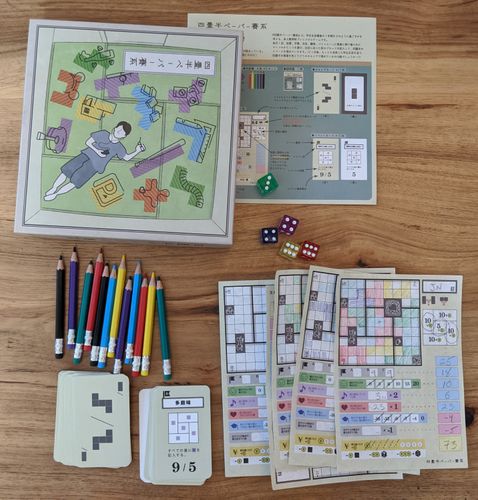 Components in the original release
The gist of the game is that you're trying to balance various aspects of your life, and to do so, you imagine fitting everything in the floorspace of your room.

Given that tatami mats are not a planetary unit of measurement, Allplay will instead have players trying to fit various aspects of their life onto a "brain board" that just happens to be the size of four-and-a-half tatami mats.

In game terms, Mind Space is a roll-and-write game. You lay out five of seventeen "emotion" cards that depict a polyomino, then roll five colored dice and assign the numbers to the cards, with 6s always being assigned to a generic 1x2 shape. You choose a die, then draw the adjacent shape in the color of the die on your brain board. You then slide all the cards down the table, with the #5 card leaving play and a new card coming in at slot #1, then roll the dice again, playing twelve rounds in total. 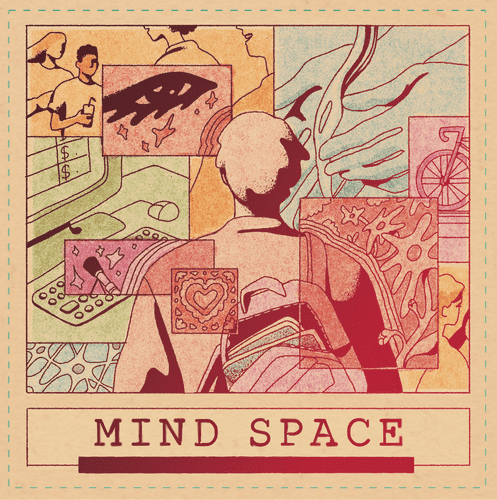 You can draw the first polyomino anywhere, and each subsequent polyomino must touch a previous one, but two of the same color can touch only at the corners. Each color has different scoring goals, for example, a pink shape (love) wants to be adjacent to the same shape, which must be in a different color, but the shapes leave after a few rounds, so you need to find a match quickly. Orange (friendship) rewards you for quantity, and purple (activities) rewards you when purple touches orange since activities are more fun with friends.

The game also includes public goals, with the players who complete them first scoring more points.

I've played Mind Space once in a not-quite-final form and got wrecked so hard that I forgot to take pictures. As you collect green shapes or completely fill sections of your brain, you earn coins, which lets you fill in bonus spaces, add an available polyomino in the color of your choice, or draw an additional polyomino...and I failed to take advantage of most of this. What's more, I filled my brain poorly, giving me few options of where to play in later turns. I imagine that with experience you get better at deciding what should go where, but the shapes on offer keep changing, so you need to remain flexible.

Mind Space changes some of the scoring of the original game and includes a second arrangement of brain sections for more variety of play.

• Sail is a two-player-only, co-operative trick-taking game from Akiyama Koryo and Korzu Yusei that debuted in 2021 as Hameln Cave.

In the Japanese game, you were pirates who had escaped a sinking ship — an event which took place in a previous game, Carta Marina — and took refuge in a cave that turned out to be cursed.

In Sail, you are once again pirates, but your ship is still sailing across the waters, and you need to navigate it through a narrow channel to reach safety. With each resolved trick, the ship advances, while also moving toward the winning player. In more detail:
Quote:
Before each round begins, players exchange cards, then play a series of tricks. Different game actions will be triggered depending on who wins each trick in combination with the unique character skills. However, the crashing sea water and a roaring Kraken make for a deafening situation, and players are unable to communicate about tactics and card information from the moment cards are dealt to the end of the action phase. 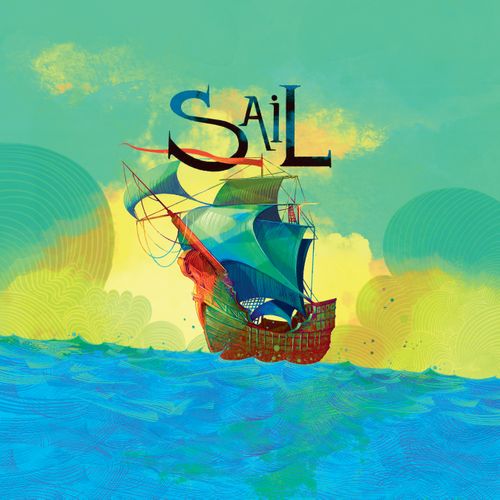 Players win the game as a team if they sail their ship into the final token before the Kraken reaches the Death tile or the Kraken deck is exhausted.

In the former game, you attempted to win food cards and rabbits in three simultaneous auctions in order to attract animals. In Couture, you are instead trying to win fame as a fashion model:
Quote:
Players seek to win cards through auctions in New York, Paris, and Tokyo to build their career. New cards are available to draft in each city, allowing the winning player first pick of Iconic Poses, Signature Walks, a personal Glam Squad, and much more. 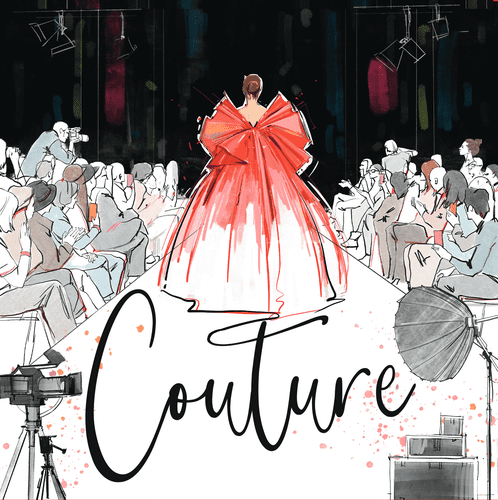 Once the seventh round has concluded, players determine their total score, with magazine cover awards bringing bonus points. The model with the highest score wins the game and with it all the fame of a global spotlight!
I recently saw someone ask whether a new edition of a game had ever removed animals from it instead of adding them in, and Couture is an example of such a change should one not have existed previously.

• The final title from Allplay is a new design: Chomp, a 2-4 player game from Clarence Simpson that warns you in the title what might go wrong for you during the game:
Quote:
The era of the dinosaurs is here! Your goal in Chomp is to form herds of dinos and make sure they are all fed. Herbivores and carnivores both need food sources, but if the carnies are not properly fed, they don't mind chomping an herbie to fill their bellies!

Gameplay involves dual rows of goal tiles and dino tiles, and each turn players select one tile to add to their personal arrangement. Goal tiles stay off to the side for endgame scoring, and dino tiles are arranged in front of each player. Dino tiles include three sizes each of herbivores and carnivores. Each tile must overlap previous ones, either on top of a quarter tile, half tile, or even a whole tile, ensuring that any covered cinos are completely hidden. 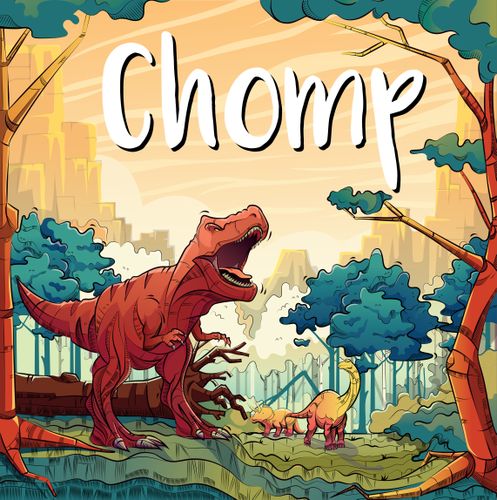 Adjacent dinos of the same species form herds, which will eat together if connected to a single food source — or die together if they are unfed, adjacent to a tar pit, or next to an otherwise unfed carnivore!

At the end of the game, each living and fed dino scores 1-3 points depending on its size, and the player with the highest score wins.