Use The Mind to Become Soulmates, and Rescue Collectibles from Black Holes

• Are you familiar with The Mind? It's pretty good, I hear, and publisher Nürnberger-Spielkarten-Verlag has announced the March 2023 release of a spinoff title from original designer Wolfgang Warsch and designer/developer Reinhard Staupe.

Here's an overview of The Mind Soulmates, which like the original game is for 2-4 players:
Quote:
The Mind Soulmates uses the same principles of The Mind, with players trying to co-operate without communication to master multiple levels of card play.

In this game, however, in addition to playing numbered cards correctly in ascending order, they must also play all cards face down, revealing them only after all cards have been played. To help them do this, one player takes the role of seer — and the seer knows more than everyone else! 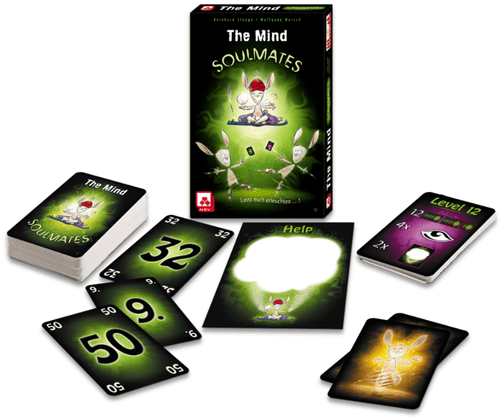 Each round, a specific number of cards are dealt out to players, and the seer is allowed to look at some of these cards in advance of play in order to give the team clues about these numbers on a wipeable board.

After the players have placed all cards face down, the seer checks whether the cards are in the right order, thereby completing the level. If not, the team loses a life, and the seer distributes these same cards again. In addition, the seer gives another hint.

If the team masters all twelve levels, they have won and can now call themselves "soulmates".
Interestingly — and in line with my commentary from January 2023 — NSV has announced only this one title for release in the first half of 2023, whereas it normally publishes 2-4 titles every six months. Very curious... 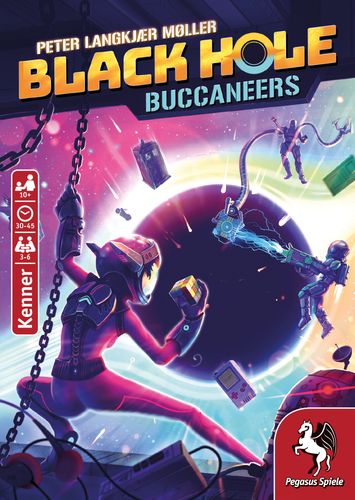 • Pegasus Spiele, on the other hand, has continued its usual practice of announcing a large number of titles for release, and in addition to German editions of Revive, Orichalcum, and My Lil' Everdell, it will release two original titles.

Black Hole Buccaneers is the debut title from designer Peter Langkjær Møller, and this 3-6 player card game, which is due out in the first half of 2023, works as follows:
Quote:
Great adventure, fame, and untold riches — all this is waiting for the Black Hole Buccaneers. In the game, the players' task is to collect ancient collectibles from the orbit of black holes, objects dumped there hundreds of years ago as mankind's chosen place for the final disposal of garbage. Among the 99 cards in the game are artifacts and relics that have powerful effects, as well as toys that are not particularly valuable in the year 2642, but that are in great demand by other species. In exchange, these species offer their help in escaping the black holes into which players will be drawn when the collected space debris exceeds their threshold for release. The player who best manages to master the dangers of outer space after three rounds of the drafting game and collects the most valuable items will win.

Black Hole Buccaneers is a fast-playing drafting game which not only offers new situations and a lot of interaction with other players, but also difficult decisions due to various card effects. In each round, everyone at the table plays one card and passes the remaining cards to their neighbor. Whoever can escape the black hole in the scoring phase of a round gets to score their collected items and thus comes a little closer to victory.
• The second original title from Pegasus Spiele is Memo Mission, a game from designers Christopher Garbe and Patrick Russell that's for 2-4 young players:
Quote:
With Memo Mission, gamers can once again immerse themselves in the magical world of the Wizardry to the Power of Three game series. In the course of the game, they experience various missions, which they must complete in the correct order to obtain valuable crystals. In order to uncover the motifs sought on the mission cards in the correct order, they must always remember where tiles lie in the 5x5 grid, even during the other players' turns. The player who finds all motifs of the current mission on their own turn can fulfill it. Potions help in tricky situations and allow special actions once per game such as secretly looking at two tiles. 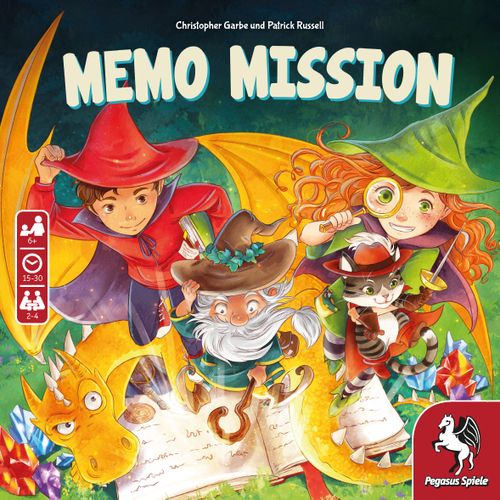 Memo Mission is an adventurous fairy tale game with a memo mechanism that includes introductory rules as well as blank missions on which the adventurers can get creative themselves and create their own stories thanks to the enclosed sticker sheet.