All Dolled Up -- On Games and Play

snicholson wrote:
hancock.tom wrote:
Why do you call the minis dolls and the mounted units horsies? It seems like you are trying to make the game sound childish. I'm just curious as to your motivation.
There's no motivation - it's just what I've always called them - as I don't script it out, I just say what comes to mind. In this episode, I tried to call them "guys," but I know a few "dolls" slipped in there. I've never called them miniatures - that just feels too formal to me.

These are toys, and in games like this, we are playing with toys, reenacting battles..just with more rules than when we were kids. So, something about playing with these particular toys (like this and Heroscape) brings out that kid in me who played with horsies. Rather than stifle that kid and act formal and stuck-up about the game, I choose to let the kid out and have fun with the toys.

Probably, it's because my first exposure to using small figures came as a kid, and continued through high school and college through roleplaying, and the terms just stuck in my head.

Also, the phrase "mounted unit miniature" sounds like something the Comic Book Guy from The Simpsons would say.

Unless you are really into it, then you made your own dolls or are getting wood shapes that you will pretend are dolls.

snicholson wrote:
wmshub wrote:
statman8 wrote:
P.S. What does it say about the games components if everyone feels the need to create their own to "improve" them?
CUBES ARE NOT SHEEP.
Cubes = Blocks.
Animeeples = Dolls.

We are just playing with toys.

Playing with sheep can get you put in jail.

In a recent On Board Games podcast, Scott also had this little gem [I think I'm probably paraphrasing a bit] which lives in my profile:

Scott Nicholson wrote:
They're your toys. You play with them how you want.
Perhaps these quotes strike you as ridiculous. Perhaps Scott's grumpy old man persona seems to clash with this "childish" [what a fascinatingly useless insult] approach to gaming.

Personally, I think he's found a really nice balance between the cognitive, intellectual, problem-solving value of games and the creative, liberational, escapist reasons we play them.

Some would define "games" as "structured play" [in this particular instance, adding the additional caveat "goal-oriented"]. That seems like a good, honest start, but it's missing something.

Some kids in a sandbox who decide to see who can build the biggest and best castle using the tools in the box are engaging in structured, goal-driven play. Is this a "game", then?

Well, certainly not in the typical sense. There seems to need to be some kind of standardization and repeatability of the play experience for it to be a "game" as we mean.

Wolfgang Kramer offers a slightly more involved definition and seems to hit on the standardization issue. Rules alone [structure and goals] are not enough to define what a game is! 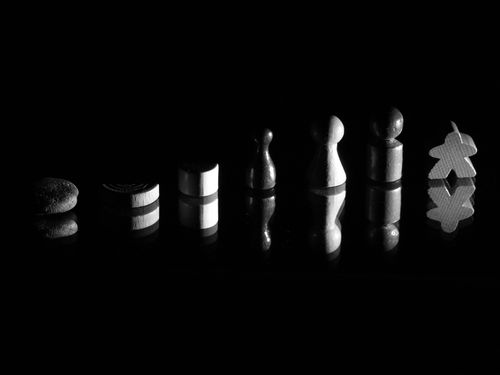 No, it turns out components are also needed! This is because a game [or at least the sub-types of games we have here, which don't include parlor / mind games] has rules for what can be done with what things.

Here's Kramer's definition, by the way:

Wolfgang Kramer wrote:
Games are objects which consist of components and rules and have certain criteria: rules, a goal, always changing course; chance; competition; common experience; equality; freedom; activity; diving into the world of the game; and no impact on reality.
He also defines a broader set of things:

Quote:
In the German language a game is any activity which is executed only for pleasure and without conscious purpose. In this definition every activity that brings pleasure is a game. For example, people dance, play musical instruments, act in plays, and play with dolls and model trains.
Note that "Play with dolls" phrasing!

Somewhere along the way from "an activity that brings pleasure with no other conscious purpose" to "an object with components and rules and goal criteria with no impact on reality", we move from mere "play" to "game", it would seem.

I think it's fine to make these connections a little less obvious, but I'm here to talk about some of the more obvious examples because I think they demonstrate something that I actually think is lacking in a lot of games: the fun that came with playing with dolls and model trains.

I want to just point out a number of games that are "fun" in their visceral playfulness. I haven't even played all these games, nor are they all stereotypically "fun" games, but they all seem to have one element in common: They look and feel like the idea of "play, just with more rules".

So here we go. This is chiefly a picture blog. 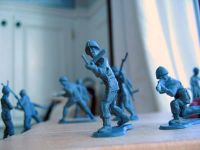 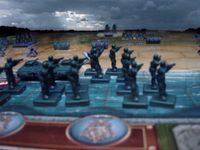 Memoir '44, AKA "playing with army men, just with more rules than when we were kids." We recently picked this out of the recommendations given [more are probably on the way]. With a few of the user variants and campaign rules, it has enough complexity for us.

And, it has something most other "wargames" [I'll concede the wargamers' point and scare-quote it] don't have: little dudes and tanks who go "BOOM BOOM BANG!" Yes, this is part of the appeal of the game. There is no shame to be had in admitting this. 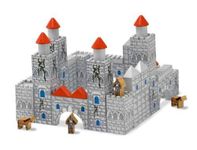 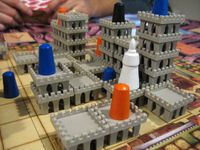 Torres, AKA "playing with castle blocks, just with more rules than when we were kids." This is not a stereotypically "fun" game. It is mostly "abstract", a bit of a brain-burner, and anything but a rip-roaring good time.

But building with blocks is also not a particularly fast or raucous endeavor. It's a deliberate and careful process of creation that demands attention and dexterity and ingenuity... well, much like Torres, in fact. 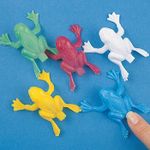 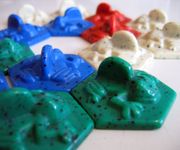 Army of Frogs, AKA "playing with plastic leapfrogs, just with more rules than when we were kids." I haven't played this or seen it in person, but it gets reasonably good reviews from abstract fans as a fun romp of a game.

The frogs do what you expect them to do--leap around!--only since it's a board game now instead of a tiddly-wink style children's toy, they also do what you tell them to do--go where you decide instead of leaping away stochastically [ok: "crazily"]! 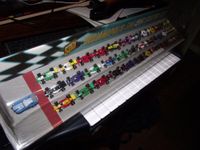 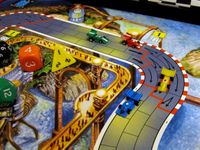 Formula Dé Mini, AKA "playing with miniature race cars, just with more rules than when we were kids." I also haven't played this one, though we almost got the big version to the table at a Northshore Boardgamers [my local game-group] game-day, as I recall.

The cars look like cars, and many people even replace them with MicroMachine models for added "authenticity". This might be among the most cleanly representative of the "race cars with rules" type of concept of the games I'm going to be mentioning.

Empire Builder, AKA "looking at natural resource maps / kids' atlases, just with more rules than when we were kids." I can't be the only one who remembers these neat little maps of the resource production of states/countries mapped by little icons in key geographic areas.

Empire Builder is just like those, only you can play a game with the map! And you get to color with crayons! And you get to do it right there on the board, connect-the-dots fashion! There's hardly a more directly "playful" game of creativity than this, I think.

What all of these games have in common is the freedom, participation, activity, escapism, creativity, and intuitiveness [who has to be told how to play with a toy? In fact, if you have to be told, can it really be said to be a toy in any meaningful sense?] of their toy counterparts.

Of course you stack the blocks on top of each other in Torres. What else would you do with them after all? Of course you connect the dots with the crayon! What else? This level of intuitiveness is not at all apparent in a lot of games, which makes them feel "like work" to a lot of folks.

Can they still be "fun" games? Of course. Obtuse, "adult", thinky, "abstract" games are still fun [for a lot of people, at least] despite the fact they have no obvious "play value" associated with them at the component-level. But, there's something special about this added level of literal play-ability.

For all of the weird things like Dice games with no luck involved., there's still an appeal for a game where you just pick up the damned dice and roll them and see what happens [yes, I realize that this has no appeal for many gamers]. That's the inherent playable feature of dice.

There's a lot to be said for "playing with dolls".