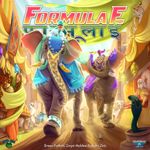 Quote:
Every year, villagers gather from far and wide for the harvest festival. They bring fine carpets to the market and share delicious mango juice while praying men honor the holy cows, and the children tease mischievous monkeys and gasp at the snake charmers. But the main event of the festival is the elephant race. Young men and women of the region spend days painting joyous and reverent decorations on their elephant partners for this one moment when they can surge through the crowds of festive villagers, push and shove their way past other racing pachyderms, and brave the tiger-filled forests to win honor for themselves and their proud elephant friends. The bell rings, the elephants trumpet their excitement, and the race begins!

Formula E is a game in which 3 to 6 players race their elephant pawns through an Indian village, over treacherous mountains, and across parched deserts seeking to be the first one to complete the course.

The primary game mechanism in Formula E is hand management as players use their hand of cards to advance their elephants through the course. Elephants move in a unique manner – they push elephants in front of them until those elephants hit an obstacle, then the active elephant pushes sideways until a path is clear for it to move forward again. Certain move-adjusting cards and tactical-screwage cards can be played to trigger events like diagonal movement, obstacle movement, and nasty little screw-your-opponents effects. Elephant racing is not, necessarily, a sport of honor!
As for the punny name, Clever Mojo's David MacKenzie explains how it came about: "During development, Bruno Faidutti, Sergio Halaban, and Andre Zatz called the game Indian Derby. When Clever Mojo Games brought it in-house, the name changed to Haathi (the Hindi word for Elephant). Somewhere along the line one of us jokingly suggested Formula E as a play on that other famous racing game, Formula D. We thought the name was fun but were worried about what the publisher of Formula D would say, so Bruno, who has friends at Asmodee, wrote for permission to use the name. Asmodee gave its blessing, so here we are with Formula E." 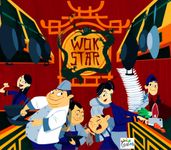 • Designer Tim Fowers, who self-published a 500-copy edition of Wok Star in 2010, has announced on BGG that he's no longer under contract with Z-Man Games – which had announced a new edition of the game in early 2011 – and will be signing with a new publisher with a Kickstarter project forthcoming. Wok Star is a cooperative game in which players try to serve customers quickly at a Chinese restaurant; fail to beat the timer, and the customers eat for free! In the same note Fowers writes, "I have spent time improving Wok Star – the game plays faster (4 rounds) but still has the strategy and teamwork. Thanks for all your support and interest in my game."

• In its December 2012 newsletter, Eagle Games and Gryphon Games mentioned two projects upcoming in 2013, one of them being a new edition of Das Amulett titled Wizard's Brew, from designers Alan R. Moon and Aaron Weissblum, the English-language edition of which Face2Face Games had announced back in 2004. While Face2Face worked with the designers to develop additional spell cards and paid for artwork for all the cards, it never brought the game to print. Looks like Gryphon Games will finally make it happen in 2013, but we'll see whether the spells will resolve this time. Here's a summary of the gameplay:

Quote:
The objective of Wizard's Brew is to collect jewels to complete your amulet. You need seven different colored jewels or eight of any kind of jewels to complete the amulet and win the game. Powerful spell cards are auctioned off each turn using a fixed set of energy stones. (Each player has ten to use throughout the game.) The winning bidder places their winning bid (in energy stones) on the acquired spell card; this card will remain in play for a length of time related to the number of energy stones placed on it. Each turn energy stones are removed from the spell cards, and these energy stones are then available again for future bidding (so these energy stones are recycled throughout the game). The spell cards give each player some resource production (four different kinds of metals) and usually a special ability that can be used in the game. With the metal resources, the jewels are auctioned off on the main board and are acquired by the players in their quest to complete their amulet.
(Disclosure: I edited rules for a number of Face2Face titles, including the spell cards and rules in its version of Wizard's Brew. We'll see whether any of my work makes it to print.)

• The other title on the Eagle/Gryphon calendar is Triassic Terror from Peter Hawes for players aged 14+ with a playing time of 90-120 minutes. Here's the game description included in the newsletter:

Quote:
Triassic Terror is a game for 2-6 players. Starting with just one herd in the swamp, players must establish new herds and grow them into larger herds, which will migrate across the four environments present, competing for the best habitats. This primaeval world is, however, full of danger. Players' dinosaurs will fall prey to the mighty T-Rex, marauding Velociraptors, and swooping Pterodactyls. Erupting volcanoes will devastate some areas and fill the skies with ash making the affected area almost unlivable. The player who best avoids these terrors and maintains the largest herds across all four environments, will win.
The newsletter notes that "[t]hese two games will be available through a Pre-order Incentive Program (PIP) set to launch early 2013!"

• Ares Games has announced a new title from War of the Ring designers Roberto Di Meglio, Marco Maggi and Francesco Nepitello, one that builds on that earlier game in a new way. Here's an overview of The Battle of the Five Armies, due out Q2 the second half of 2013:

Quote:
The Battle of the Five Armies – based on the climax of JRR Tolkien's novel The Hobbit – pits the hosts of the Elvenking, the Dwarves of Dain Ironfoot, and the Men of the Lake led by Bard the Bowman against a horde of Wolves, Goblins and Bats led by Bolg, son of Azog. Will Gandalf turn the tide for the Free Peoples? Will the Eagles arrive, or Beorn come to the rescue? Or will Bilbo the Hobbit perish in a last stand on Ravenhill?

The Battle of the Five Armies features a game board representing the Eastern and Southern spurs of the Lonely Mountain and the valley they encircle, and a number of plastic figures representing troops, heroes and monsters.

The Battle of the Five Armies is a standalone game based on the rules for War of the Ring, which is from the same designers, but with the rules modified to function on a tactical level as they describe a smaller battle rather than the entire war. Ares Games plans to expand the Battles game system in the future, releasing expansions depicting other battles from the Third Age of Middle-earth narrated in The Lord of the Rings, such as the Siege of Gondor and the assault of Saruman against Rohan.
• Alderac Entertainment Group has started previews for Smash Up: Awesome Level 9000 by showing off an example of the Steampunks faction.