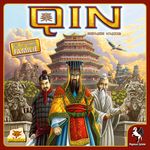 • Derek Thompson at MeepleTown has published a two-part interview with designer Reiner Knizia, with part one focusing on Indigo and Qin and part two covering Spectaculum, The Hobbit: An Unexpected Journey - Das Kartenspiel, and games which likely have had zero presence on your radar. A couple of excerpts that highlight his current approach to game design and why his recent releases tend to be nestled in the Venn overlap between casual and strategic gamers, starting with why players in Indigo and Spectaculum have small hand sizes in the basic rules:

Quote:
For me, I think the overriding criterion is the play dynamics. Therefore, if you have a small hand – just one tile to play – the game speeds up significantly because people don't have to ponder about two or three or four tiles, and which one do I play in which situation, and which one do I want to play next turn. Suddenly the game becomes much more complex for some players, and for some it becomes much more painful because they have to wait. So in this respect, I rather like fast turns, and if I see that it moves fast, then I'd rather increase the number of turns and have many short turns, instead of big and excruciatingly long ones.
As for his approach to determining what should be included in a game:

Quote:
The easier process, which I find much more applicable to good results, is to start with something bigger and more convoluted. So, to begin, add a lot of things in, and then streamline them down. I'm more coming from a scientific background; I'm a scientist at heart – and scientists try to reduce the redundancy of the information and bring it down to a few principles, and that's my approach as well. That means I have to start with a rich environment, otherwise I narrow it too much and end up with only a small game. For a big game, I need to start with a very big conglomerate, which is not a one-step process – we very often throw more stuff at it and build it up again, and then see how we can melt it down and what remains and what falls off again. That's a very good process for me. I think it's a much harder process to begin with 80% and just try to add another 20% into it and be able to integrate it nicely. Usually it's better to have a system and say, "Okay, this looks good but very big, what do we absolutely need to have and what can we leave behind?" because then you end up with only the best things out of the big conglomerate.
As a particular example of this process, he talks about what hit the cutting floor in Spectaculum:

• Yoann Levet's Myrmes from Ystari Games has won game of the year on French gaming site TricTrac, with Trajan and Village placing second and third in the ranking based on the votes of roughly two hundred people.

• On video game site Kotaku, Quintin Smith offers his list of the five best board games in 2012 – Eclipse, City of Horror, Android: Netrunner, Risk: Legacy and Mage Knight – with the former having "made the most lasting impression on the scene" and the latter being "the most complicated, the most nuanced, and the most interesting puzzle I played this year" as well as "everything that board gaming can be".

• Days of Wonder reprinted Mystery of the Abbey in 2012, but the English edition of the game included errors on the Mass cards that tell you how many cards to pass at the end of each round. On December 20, 2012, DoW posted details on how to get a pack of replacement Mass cards should yours state that you pass two cards in each Mass.

• After fifteen years, Stuart Dagger has stepped down as editor of gaming magazine Counter and longtime contributors Ben Baldanza and Greg Schloesser are taking over both the editorial and subscription/marketing positions at the magazine (as Alan How is leaving the latter position at the same time as Dagger). Schloesser describes the future of the magazine as follows:

Quote:
So what can you expect from Counter magazine as we move beyond issue #60 and into the future? More of the same and, well, more. The same team has been assembled, so you will continue to enjoy reviews and articles from all of the familiar gamers and friends you have come to know and trust over these past fifteen years. Both Alan and Stuart will also continue to contribute, which is a blessing. We will also have contributions from more folks located around the world. These will be folks who are well-known and respected within the gaming hobby and industry. We have other exciting additions planned that will help make Counter even more exciting, including an online website where you can learn more about Counter, the folks who contribute, and even read a bonus review or two!

Ben and I are very humbled and excited to be assuming the reins of Counter magazine from Stuart and Alan. We are both very appreciative of the outstanding publication they have created and the service they have provided not only for Counter readers, but for the entire hobby and industry. We promise to continue the standard of excellence set by these two outstanding men, and hope to make Counter even more informative, exciting and fun. Join us as we continue to produce the best magazine in the board game hobby!
Subscription information is included on the website.