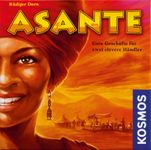 • I added Asante to the Nürnberg 2013 Preview in early January, but now both Kosmos, the publisher, and Rüdiger Dorn, the designer, have released more details on the game, so I've updated the game description as follows:

Quote:
"Asante", Swahili for "thank you", is something an African merchant might say to you after he has made a good deal, and if you prove to be the better merchant in this game, you might wind up with an "Asante" at game's end.

Asante is a two-player game set in the world of Jambo and Waka Waka. The players are dealers in an African marketplace, buying and selling furs, silk, jewelry, fruits, tea and salt in order to make the most money possible. During market day, they meet individuals with special abilities who can make deals not otherwise available; a player can also cause havoc for the opponent by loosing animals on his stand. If you visit one of the fifteen holy sites, you can take advantage of the special powers at those locations in addition to your normal five actions.

Asante can be played together with Jambo or its expansions to create a marketplace with even more activity among its stalls!
On BGG, Dorn notes that he had originally planned to release the game on his own, as he had done with the two Jambo expansions, but he approached Kosmos – the original publisher of Jambo – to see whether it would be interested in publishing this standalone expansion and as you can now see, it was. Dorn also notes that all the cards in Asante are new. I'd presume that with the release of Asante, Kosmos will return Jambo to print at some point, but who knows? I'll ask at Nürnberg to see whether that re-release is in the cards or not. 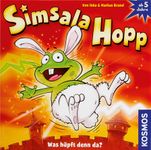 • Another Kosmos title being featured at Nürnberg 2013 is Simsala Hopp from the prolific Inka and Markus Brand. Geez, guys, give some other designers a chance to get their creations published, too! Here's an overview of this children's game:

Quote:
Time for a magic tournament at Magicstone Castle! In Simsala Hopp, the young player magicians need to use their magic wands to transform frogs into hares while the animals fly through the air – but if they conjure things too freely, they risk sending animals arcing too high and landing outside the castle, and shenanigans like that will cost the magician points. Whoever can transform many frogs into rabbits without being too careless will collect the most tournament chips and win.
And in case that description didn't present the game clearly enough, all you have to do is look at the image below, and you'll understand everything at a glance: 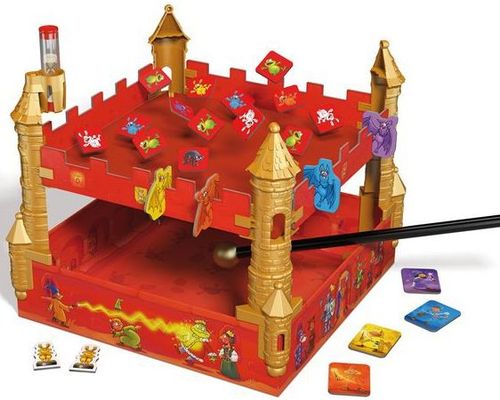 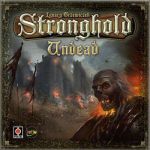 • In a January 4, 2013 blog post, Portal Publishing mentions that if all goes as planned for the year, it will release three expansions for existing games, three new editions of previously released game, and three new board games – all of this being in addition to expansions for its RPG lines and its monthly STORYonBOARD magazine. A later post clarifies that only two new games, one reprint and all of the expansions will be released in English, with the reprint (and the first title due out in 2013) being a new printing of Stronghold: Undead. As for one of the expansions, Portal reports that it will be testing a new army for Neuroshima Hex! at Portalkon, a new convention devoted to Portal's releases that will be first held in February 2013.

• U.S. publisher Toy Vault, Inc. has announced that it's entered a licensing partnership with Twentieth Century Fox Consumer Products to create "table-top games, plush, and novelty items" for the Joss Whedon television series "Firefly", with the first of those items appearing in Q2 2013. From the press release: "In the months to follow, Toy Vault plans to launch multiple table-top games, decorative pillows, a line of collectable mini-plushes of the entire Serenity crew, and more."

• Z-Man Games has posted info on the compatibility packs for Pandemic and Pandemic: On the Brink on its Facebook page, detailing when you'd need to buy which packs, should you desire to match old editions of the game with new. As the comments make clear, many are unhappy with the changes to artwork and graphic design, feeling that they're a slap in the face for "your original fans who, btw, were responsible for the game being a success", but c'est la vie. You can either continue to play the old games or shell out for the compatibility packs or new versions as backwards compatibility packs that match new material to the old look are almost certainly off the table. I'd suspect, based on no inside knowledge of this case, that the changes resulted from mainstream retailer requests for a streamlined, sharper-looking, more mainstream game. Such requests aren't unusual, and given the sales potential that comes from landing games in these outlets, publishers are often willing to make such changes. Again, I'm speculating here...

Oh, and for another taste of how Z-Man is marketing this new edition of Pandemic, here's a comic that appeared on the game's Facebook page: 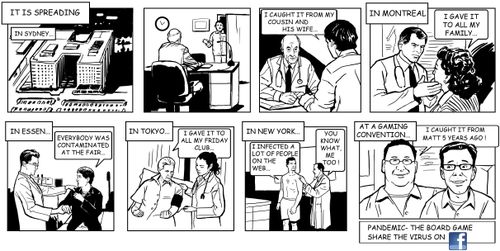