I try to keep my board game collecting in check. Instead of buying a ton of games as they come out, I try to do a lot of research beforehand so that I can plan my purchases wisely. It doesn't always work, but I invite you to come along and see what shows up on my Board Game Radar. Is there a game I've missed? Tell me about it and if I'm interested in it, it will go on my radar!
Recommend

Sentinels of the Multiverse: Shattered Timelines 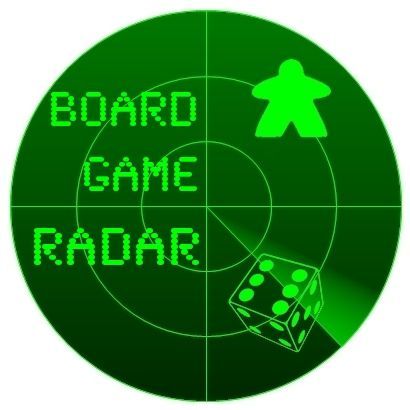 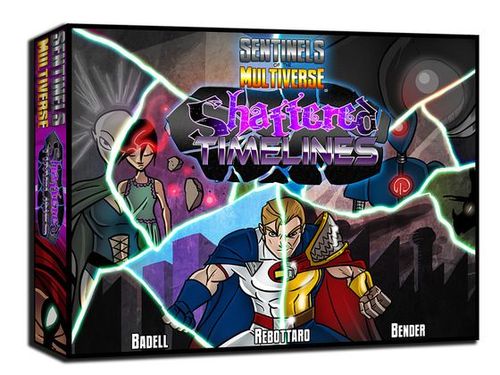 I have previously covered Sentinels of the Multiverse in this blog here and here. As soon as the kickstarter went live, Shattered Timelines went on my radar. Their kickstarter did a great job building excitement and several stretch goals were hit. Even if you didn’t get on board then, most of the bonus items are now available on their website.

Sentinels of the Multiverse does a great job of making the players feel like they are a group of superheroes fighting a villain straight out of a comic book. It is a card game that features several unique decks of cards. Each hero and villain in the game gets their own unique deck. The battles also take place in one of several unique environments, also controlled by a deck of cards. The game consists of an automated villain turn, followed by the players each taking a turn with their hero, and then an automated environment turn. 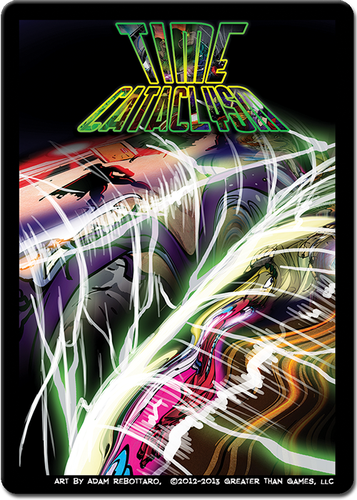 As you can imagine, each expansion features new heroes, villains and environments. Most of the new decks in this expansion involve various timelines. The new environments are Time Cataclysm, a split in the space-time continuum and the Block, an inter-dimensional prison for super-powered villains. The new heroes are Chrono-Ranger, a time traveling cowboy and Omnitron-X, a future version of a former enemy.

What I’m most excited about are the new villains, though. There is La Capitan, an time traveling pirate. Next up is Kismet, a psychic who can control luck and jinx others (more on her later!) The Dreamer is the 6-year-old version of the hero Visionary, who has dreams and nightmares that manifest themselves as real world threats. It appears that the heroes have to fight these nightmares while keeping the Dreamer alive.

The final villain is Iron Legacy; a possible future version of Legacy. 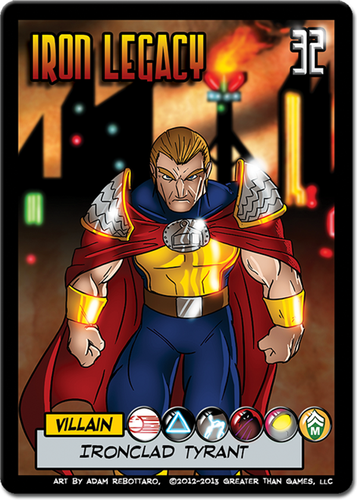 In one timeline, he is killed by Baron Blade, which opens the door to his daughter taking his place as a superhero. In an alternative future, though, Young Legacy dies which sends her father into an insane rage. Knowing his super-powered line has come to an end, he feels he needs to personally destroy all evil before he is done. He rules with an iron fist, which corrupts his mind and makes him a worse threat than those who he wants to stop. It will be very interesting to see how his friends can try to stop their former leader.

I have been trying to include a short interview with the designer of the game at this point. I was running behind on this one, though, so the designers are currently shipping out games instead of answering my questions. I’m sure all 2147 backers are happy about that! Hopefully, when things calm down, they will be able to answer my questions and I can post the interview later. I was able to send some questions to Alex Franklin, though. Alex designed the villain, Kismet, which won a design contest that Greater Than Games was sponsoring. Now his creation exists in the game! 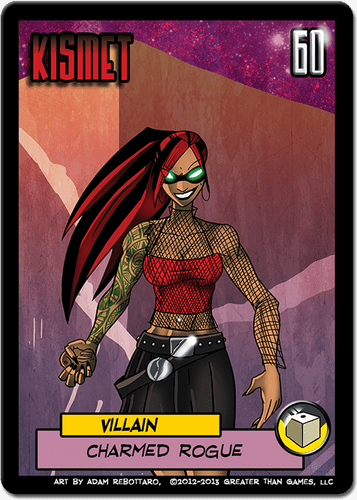 Quote:
You beat out 213 other entries in a Design-A-Villain contest and now Kismet is being released with Shattered Timelines. You must be very excited! What was her inspiration?

Oh man, yeah, this whole experience has just been unbelievable! I mean, I'm still just a student studying game design, so the whole notion that something I created is going to be in a REAL ACTUAL GAME still has me thrilled. When I first found out, much flailing ensued.

The inspiration for my villain is a little hard to pinpoint; there were a bunch of little things that just sorta gradually added up in the back of my mind. The initial inspiration for her luck-controlling powers probably came out of two characters: MS Paint Adventures' Vriska, AKA "The Thief of Light," and Gunnerkrigg Court's Andrew "Smitty" Smith. Being able to steal luck and distort probability seemed like an interesting take on the "alternate realities" theme, so I built on it from there. I thought up some basic mechanics that might represent it well, then tried to see what sorts of characters I could get from these mechanics, then went back to fleshing out the mechanics for the ideas I liked more, which gave me better ideas for the character, and so on. The real turning point, the part that really felt like a flash of inspiration, was when I came up with the source of her powers, her lucky talisman. This gave me a great story to tell --the history of her charm, how it affected her, the way it twisted her mind and its power became an addiction-- and great mechanics to play with --ways she could "cheat" at the game, get her better cards on top of her deck, how the players could counter her schemes and give her a taste of her own medicine by stealing the charm and using its power against her... I had no shortage of ideas after that point.

How much detail did your entry involve? Did you provide just her backstory or did you design a full 40 card deck, too?

I had a lot of ideas for game mechanics that I really liked, but I only felt the need to flesh them out just enough so that others might see the potential and build on them. Game design is a collaborative effort, after all. So I basically put down whatever concepts I thought were cool and left them open-ended. The mechanic I did give a lot of detail for was her flip mechanic, since that's the core gameplay concept. I wanted it to be clear that this battle was a struggle for control over fate, enforced by the fighting over the Talisman.

The most detailed part of my villain was actually her backstory. Whatever the actual mechanics ended up being, I wanted to be sure her character was understood and kept the way I envisioned. The first three paragraphs of her biography on the Kickstarter are nearly a word-for-word transcription of what I wrote for her backstory in the initial submission. I was pleased to see they liked it.

Aside from Kismet, who is your favorite character from Sentinels of the Multiverse?

Hmmm... Gameplay-wise, I really love Mister Fixer's style. All these tools and fighting stances, each designed for prying open or circumventing a certain obstacle. It's interesting to have a character that is neither a conventional support guy nor a consistently heavy hitter, just this single point of damage that he always manages to wedge in where nothing else fits. I really feel like a martial arts- practicing handyman when I play as him!

Story-wise, Ima go with The "Savage" Haka. Here we have this ancient, nigh-indestructible warrior, but in his spare time he does things like teach kindergarten and eat burgers. It's adorable. I want to hug him. Plus his story's gotten even deeper in this new expansion, where all other humans have been killed and he's lost 1 hit point. So he passes eternity keeping the stories of his lost friends safe, becoming some awesome wise old sage in addition to everything else. He's not a noble savage. Haka is just noble.

.
I would like to thank Alex for his time and congratulate him on a very interesting villain. I'm going to cut this short now, so I can go wait outside for my copy to be delivered!