New Game Round-up: Piecing Together the Past in Patchistory, Pearl Games Visits Bruxelles & Rats and Flags in the U.S.

• Since its debut in 2010 with Cupeed, Korean publisher Deinko Games has released somewhat light, mostly family friendly games, but in August 2013 it will release Patchistory, a big strategy game with a 120-minute playing time from designers Yeon-Min Jung and Jun-Hyup Kim. Aside from the August release in Korea, the game will also be available at Spiel 2013 in October. Here's an overview of the game:

Quote:
Patchistory is a strategy board game with cards that symbolize historical heroes and wonders, with the whole game being divided into three eras. During the game, you acquire these cards through auctions and expand your territory by placing cards so that they overlap one another in a 5×5 space in the first era, a 6×6 space in the second era, and a 7×7 space in the third era. When your land – that is, the layout of your cards – is well built, the card fuctions are activated. You can earn victory points with diplomatic actions, domestic politics, war movement, the actions of production, etc., and at the end of the game, the person with the highest score after the third era wins.

Because you can make combos with lots of features on historical cards and you can score in various ways, Patchistory will give you another new exciting play every time it hits the table. 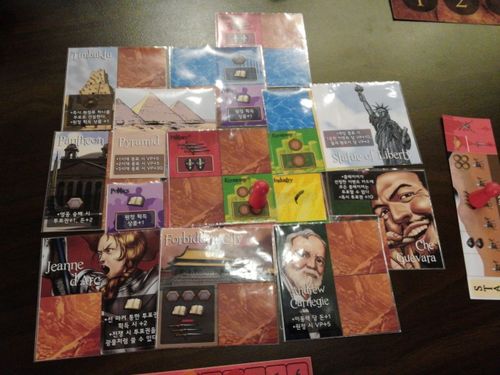 Prototype game in the third era 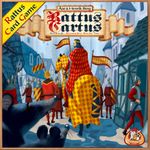 • As a weird stretch goal for its Kickstarer campaign for New Amsterdam, U.S. publisher Pandasaurus Games will import a small number of copies ("less than 500") of Henrik and Åse Berg's Rattus Cartus, with those copies being available to KS backers for an additional $40 pledge. Will the game reach U.S. stores as well? Due to the small number of copies being imported, Pandasaurus notes in its newsletter that "availability in retail chains will be extremely limited as this is far less than any other game we've brought over".

• An attendee of the Paris est Ludique game fair in June 2013 has posted a pair of images (with preliminary artwork) of Pearl Games' Bruxelles 1893. Not much info about the game itself beyond it being "a worker placement game, with elements of bidding and majority control", but we still have a few months before the game's debut at Spiel 2013. All in good time...

Quote:
In Flag Frenzy USA, players try to match flags on cards in their hands with flags on the table, emptying their personal card deck before anyone else can.

Flag Frenzy USA consists of 49 flag cards and 10 region cards (two each of West, South, Northeast, Midwest and Islands); each flag card shows eight state flags, and any two flag cards have exactly one flag in common, similar to the cards in Catch the Match and Spot It!

Game play differs from those titles, however, as two cards are placed face-up on the table at the start of play while the remainder of the deck is distributed evenly among the players. All players take two cards in hand, then everyone simultaneously tries to play onto the face-up cards by spotting the matching flag and giving its state's name when playing the card. With a region card, the player has to name a flag in the region being played.

After playing one or two cards, the player refills her hand. The first player to play all of the cards in her deck wins.