New Game Round-up: Logic in Vienna, Witches in Hearts, Treasure in a Castle & Pandemic: In the Lab

• German publisher Clicker Spiele, owned by designer Stephan Riedel, will have one new title at Spiel 2013 in October – Wiener Melange – with Riedel once again asking players to use logic and deduction while playing his designs. Here's the brief description that I have for now:

Quote:
Wiener Melange takes players to Vienna in 1910, with prominent individuals such as Trotzky, Klimt and Freud meeting one another in the coffee bar "Central". The players work in the coffee bar and must use logic and deduction in order to place their guests next to these VIPs. (A "Wiener Melange", by the way, is a specialty coffee drink akin to cappuccino.)
And here's an early draft of the game, courtesy of Riedel: 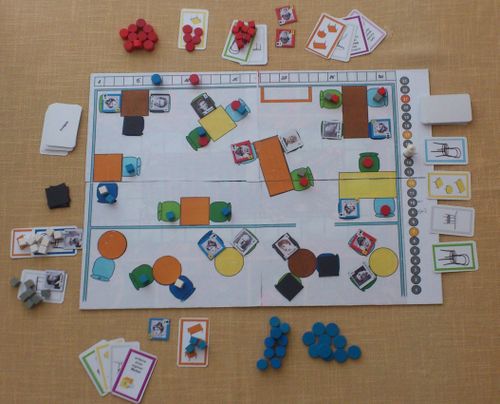 • Publisher U.S. Games Systems has two new titles from Wizard designer Ken Fisher that it will feature at Gen Con 2013 in mid-August, the first being HeartSwitch, co-designed with Joe Andrews, the author of The Complete Win at Hearts. Just as Wizard is essentially Oh Hell! with special cards that throw a lot of wrenches into the gameplay, HeartSwitch is Hearts with eight additional cards. Here's a summary of gameplay:

Quote:
The object of HeartSwitch is to have the lowest score at the end of the game. The sixty-card deck consists of the standard 52-card deck, plus four Magicians and four Witches, two good and two bad, with Witches ranking between Jacks and Tens.

As in Hearts, HeartSwitch is a trick-taking game with fairly standard rules. The lead player plays a single card, then each other player must follow suit, if possible – except that a player can always choose to play a Magician. A Magician is a null card that can never win a trick (unless a trick consists only of Magicians). Whoever plays the highest card in the suit led collects the cards, then leads to the next trick.

After everyone's hand is empty, players score points for the cards they've collected. As in Hearts, each heart collected is one point, while the Queen of Spades is 13 points. What's new in "HeartSwitch" is that the Witch of Spades is worth 5 points, while the Witch of Clubs cancels points earned for either of the Spades cards. The Witch of Hearts doubles points earned from hearts up to a maximum of 15 points, while the Witch of Diamonds knocks up to 5 points off your score. If a player "shoots the moon" by collecting all the hearts and either the Witch or Queen of Spades (or both), that player scores no points while everyone else scores 20, 25 or 30 points.

Players continue playing rounds until one player reaches 70 points, at which time the player with the lowest score wins. Alternatively, players can agree to play a set number of rounds, with the lowest-scoring player winning the game.

• The second title from Fisher is WOW: World of Words, with the game being another take on the "letters on cards" genre. Here's an overview:

Quote:
Unlike other word games, in WOW: World of Words there's no waiting for turns. When the timer starts, all players make as many words as they can in just one minute. Turn over a blue card for the first letter and turn over a red card for the last letter. Players score points for each unique word of five or more letters, with bonus points for longer words. Special cards add exciting twists.
• U.S. publisher Steve Jackson Games has now set a September 2013 release date for Munchkin Pathfinder, the latest standalone base game in the increasingly large Munchkin family. Copies should also be available at Gen Con 2013 in mid-August. 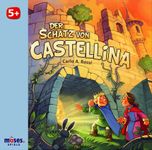 • German publisher Moses Verlag has a new title coming from Carlo A. Rossi in September 2013: Der Schatz von Castellina. Here's an overview of the gameplay:

Quote:
Look, on the hill! A great old castle that's surely filled with treasure and who knows what else? Let's go exploring to see what we'll find...

In Der Schatz von Castellina, the players need to search inside the castle to collect the color-coded treasure marked on their individual treasure boards – but they can't look inside the castle while they search. (Apparently no one thought to bring a torch!) They reach a hand inside the castle to feel among the treasures before them and (with luck) pull out something that they need. The players aren't completely in the dark, though, as they do get to watch other players search for their treasures. If you pay attention, you'll know where your goods are hiding when it comes time to grab the goods! 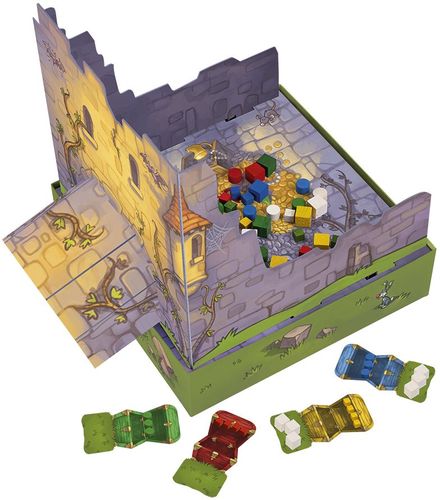 • U.S. publisher Z-Man Games has finally published an overview of Pandemic: In the Lab, the second expansion for Matt Leacock's Pandemic (with co-designer Tom Lehmann) that will debut at Gen Con 2013. Here's an edited excerpt from the news announcement on the Z-Man website:

Quote:
With In The Lab, you must find cures differently than in the normal Pandemic base game. Viruses must develop in the lab and be tested there before a cure can be found.

To discover a cure you must first Sequence and Characterize the disease. You will then be able to test it and hopefully find a cure.

Each Sequence card depicts the structure of a disease. Before you can start the search for a cure, you must first Characterize the sequence card by deciding which color disease you will treat. You do this by placing a card of the corresponding color in the Characterize spot. Sometimes, you don't have a choice (Card 1 below); at other times the choice is simple (Card 2); but at still other times, it may get more complicated to decide which color to chose (Card 3). You must choose a color that is shown on the card in the top right corner.

You will then have to get samples from all the cubes of the depicted colors on the characterized card. They do not need to be done in a specific order; you just need to have all the cubes. Once you have them, you are now ready to start looking for a cure!

More details in the original news announcement on the Z-Man Games website.