• Brian Mayer's Freedom: The Underground Railroad from Academy Games hit Kickstarter and more than doubled its funding goal in just two days, adding a mini-expansion of additional abolitionist cards to the game. (KS link) For those not familiar with the game, here's an overview:

Quote:
Early in the history of the United States, slavery was an institution that seemed unmovable but with efforts of men and women across the country, it was toppled. In Freedom: The Underground Railroad, players are working to build up the strength of the Abolitionist movement through the use of notable figures and pivotal events. By raising support for the cause and moving slaves to freedom in Canada, the minds of Americans can be changed and the institution of slavery can be brought down.

Freedom is a card-driven, cooperative game for one to four players in which the group is working for the abolitionist movement to help bring an end to slavery in the United States. The players use a combination of cards, which feature figures and events spanning from Early Independence until the Civil War, along with action tokens and the benefits of their role to impact the game.

Players need to strike the right balance between freeing slaves from plantations in the south and raising funds which are desperately needed to allow the group to continue their abolitionist activities as well as strengthen the cause.

The goal is not easy and in addition to people and events that can have a negative impact on the group's progress, there are also slave catchers roaming the board, reacting to the movements of the slaves on the board and hoping to catch the runaway slaves and send them back to the plantations.

Through careful planning and working together, the group might see an end to slavery in their time.

• Saar Shai's independently produced card game The Agents features a neat design hook on top of what sounds like a quick-playing backstabby game. (KS link) Here's a rundown of the gameplay:

Quote:
The Agents is a strategic card game that introduces a unique double-edged card mechanism into the undercover world of covert operations, subterfuge, secrecy and sabotage. Players must join their Agents into Factions, assign Missions and take their opponents down, to gather intel and win the most points.

Each Agent card features a "command" on one end of the card and "points" on the other end. The direction in which you place the card determines from which asset you benefit. If you choose to perform the command, one of your opponents scores the points; if you keep the points for yourself, an opponent gets to perform the command. With 25 different Agents, each with its own unique ability, Agents can be turned, killed, extracted and swapped – making the game ever flexible, variable, unpredictable and a test of forward planning and quick thinking. As you learn about each Agent's special abilities, discover how Agents work together or against each other, and weigh up the advantages of collecting points for yourself versus using the commands to further your goals and sabotage your opponent's strategies, the game becomes increasingly complex, dynamic and challenging.

Missions, played alongside Factions of Agents, provide interesting, strategic conditions which, if fulfilled, score you big points – but if you race ahead, you'll also become a target for attack. The better you're doing, the more under fire you'll be.
Some people have raised concerns about KS funding of The Agents, noting that Shai was involved in a mid-2012 Kickstarter project for a gaming device called "Ringbow" that has yet to deliver the product. Shai addressed these concerns on July 14, 2013 on The Agents KS project, and Efrat from the Rainbow KS project responded to Shai's comments on July 16, 2013.

• German publisher Spieltrieb is raising funds on Startnext for a new edition of the 2004 release Keep Cool from designers Klaus Eisenack and Gerhard Petschel-Held, noting that it's sold out three editions of the game but lacks funds for a new edition. (Startnext link) Here's a game description form the project page:

Quote:
The main idea of the game resembles that of global climate change negotiations: Six powerful world regions negotiate their economic development and climate protection. They can either cooperate to protect the climate or seek for individual profit maximization. If, however, climate change is not sufficiently addressed it will fight back: farmland dries out, flash floods cause dramatic damages and plagues increase. If the negotiators still don’t start to cooperate, everybody will lose...

Every world region pursues both economic and political targets. While all players need to build an industrial basis and constant economic growth, the political targets may be conflicting. Some might want to promote renewable energies or are pushed to protect the climate by influential environmental organizations. Others might not believe in climate change or are instrumentalized by their oil industry. Finally, some will be pragmatic – they are mainly concerned with global economic growth or their insurances and will cooperate with either group, depending on the current situation.

• Designer/publisher Phil Walker-Harding from Adventureland Games is back on Kickstarter for a second go with Pack of Heroes, and with the funding goal reduced by two-thirds from his original $15k target, Walker-Harding has raised nearly three times that lowered goal. Guess he learned a few things from the first go-round! (KS link) As for what's in the game, here's an overview:

Quote:
Pack of Heroes is a two-player card game set in a fun parallel universe of vintage comic books. Each player picks his team from the 30 different heroes in the game, then takes on his opponent in an exciting tactical battle with all sorts of crazy super powers! Combat is resolved with the unique "power card" system, which is designed to have all the excitement of dice-based combat but with far less randomness. Whoever has the last hero standing wins control of Power City!

The heart of the game is the hero cards. They represent one hero in the game and are modelled after vintage trading cards. On the front side is a picture of the hero, and all the gameplay info about their powers; on the back are fun stats and an origin story!

At the start of the game, each player assembles his team. You can either pick one of the set starting teams or draft your team. Drafting allows you to put almost countless sets of heroes together to try out all sorts of crazy combos and synergies. Drafting works almost like a mini-game before the main event, as the players try to put their best possible team together. Once you have picked your team, it's time to fight. The players take it in turn either bringing a hero into play, or using their hand of power cards to trigger one of their heroes' amazing special abilities! 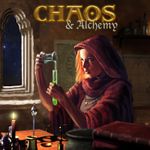 • Designer Michael Iachini, who self-published Chaos & Alchemy through Clay Crucible Games, is going with Game Salute for the game's second edition, with new artwork and a new graphic design. The gameplay remains the same, with players needing to build up a laboratory sophisticated enough to turn lead into gold. (KS link)

• Designer Luca Caltabiano, who previously took his design to Indiegogo for funding, is now on Kickstarter for a second go at CarmaRace, in which everyone is trying to hitchhike their way across a continent to acquire a limited edition collectable at a convention. No gamer would ever do that in real life, of course, would they? (KS link)

• U.S. publisher Wishing Tree Games is trying to fund Andrew J. Clark's Codename: Oracle, a two-player game themed around competing U.S./Soviet efforts to use psychic powers to their advantage and gain information about the enemy. The Kickstarter project does the thing in which the Russian letter Я (pronounced "ya") is used in place of an "R", so I'll have to issue the project 15 demerits. Using the letter И (pronounced "ee") as an "N" brings another 20 demerits. Don't push your luck, guys – a few more demerits and you'll receive a black mark and a day's detention! (KS link)

• Kickstarter is opening its doors to Canadian-based project creators.

• And while this issue has already been discussed on BGG, I thought it worthwhile to include the news in this update in case you haven't already seen it, namely that Erik Chevalier of [company=22549]The Forking Path, Co.[/company] announced on July 23, 2013 that he wouldn't be able to deliver Keith Baker's The Doom That Came To Atlantic City, which had racked up $122k in funding in mid-2012 by more than 1,200 backers. An excerpt:

Quote:
This is not an easy update to write.

The short version: The project is over, the game is canceled.

After much deliberation I've had to make this decision. I've informed Keith and [artist] Lee [Moyer] and neither at all happy with this situation. Every possible mistake was made, some due to my inexperience in board game publishing, others due to ego conflicts, legal issues and technical complications. No matter the cause though these could all have been avoided by someone more experienced and I apparently was not that person.

From the beginning the intention was to launch a new board game company with the Kickstarted funds, with The Doom that Came to Atlantic City as only our first of hopefully many projects. Everyone involved agreed on this. Since then rifts have formed and every error compounded the growing frustration, causing only more issues. After paying to form the company, for the miniature statues, moving back to Portland, getting software licenses and hiring artists to do things like rule book design and art conforming, the money was approaching a point of no return. We had to print at that point or never. Unfortunately that wasn't in the cards for a variety of reasons.
The story of the $122k Kickstarter that couldn't has been written up on Penny Arcade and The Escapist, with many project backers expressing surprise that they were supporting someone's efforts "to launch a new board game company" (and not merely backing a game, which is what the KS project suggested) and filing fraud complaints in the state of Oregon, where Chevalier is located after having "left [his] job to do this project".

Quote:
When Lee and I first heard this news from Erik, it came as a shock. We've been working on this game for over a decade. In 2011 we had it ready to go to the printer with Z-Man Games, until a change in ownership dropped it from production. Based on the information we'd been receiving from the Forking Path we believed that the game was in production. It's a personal and financial blow to both of us, but what concerns Lee and I is that people who believed in our work and put their faith in this Kickstarter have been let down....

Lee Moyer and Keith Baker are not part of the Forking Path. Neither one of us received any of the funds raised by the Kickstarter or presales. I haven't received any form of payment for this game. Lee and I were not involved in the decisions that brought about the end of this project, and we were misinformed about its progress and the state of the game....

Lee and I don't know exactly how the money was spent, why the backers were misled, what challenges were faced or what drove the decisions that led to the cancellation of the game. Not only did we not make any money from the game, we have actually lost money; as soon as we learned the true state of affairs, we engaged a lawyer to compel The Forking Path to come forward to the backers and to honor its pledge to issue refunds.
Chevalier has since supplied Baker and Moyer with a list of the project backers, and they intend to present the backers with a print-and-play project so that the game is at least playable in some form.