• U.S. publisher Cryptozoic Entertainment has a huge line-up of titles coming in 2013, as covered in this March 2013 BGGN item, and now it's attached a release date and official name for Night Eternal: The Game, based on the True Blood television series on HBO and due out Q4 2013. Here's a rundown of the gameplay:

Quote:
In ancient times, immortal vampires played games with people's lives and with real blood stakes. Now in card game form, no real blood will be spilled, but the strategy, tactics, and power-plays still abound. Based upon a game that exists in the True Blood universe, Night Eternal: The Game is a competitive card game of intrigue, power-plays and betrayal where vampires jockey for power, position and ultimate control of the rival factions: The Authority and The Monarchy.

Players must ante blood from their pools to both factions each turn of the game. Players build up their hands by acquiring cards from a powerful, but temperamental Immortals deck and a willing and able Agent deck. The cards that a player chooses to play will determine the faction to which he or she is loyal...for now. In turn order, each player plays out one card (face up) during each of three rounds each turn, so you never just how much power it will take to seize control of a faction each turn.

Players must pay attention to the cards their opponents are playing. It's more difficult to enable a powerful card's special ability if your opponents are playing weaker cards. Weaker card special abilities are easy to resolve, but weakness doesn't win the war. Special abilities might allow a player to steal blood from a faction or move it from one faction to another, so switching your loyalty to a new faction (by playing cards of that faction) might just throw off your opponents' best laid plans.

In the end, power still rules the day. At the end of each turn (after three rounds of card play), the cards are scored. The player with the highest value of Authority cards earns that faction's blood pool. The player with the highest value of Monarchy cards earns that faction's blood pool. The key to victory is to have more blood tokens than any other player when the first player dies...by running out
of blood.
• In a BGG thread for The Hobbit: An Unexpected Journey, Cryptozoic Entertainment's Matt Hyra mentions that resources placed on the board for that game will score points for players but can't actually be used until the release of The Hobbit: The Desolation of Smaug, so expect that board game to be announced at some point – in case you weren't already anticipating it given the Hobbit horde already on the market.

• Italian publisher Stratelibri has posted a quartet of new city tiles for Ventura that players can download and add to the game.

• In a July 22, 2013 BGGN post, I mentioned the debut of Le Fantôme de l’Opéra at Gen Con 2013 in mid-August. Co-designer Bruno Cathala – who will be present at that convention to teach his game – has passed along details of the gameplay, and I've summarized everything below:

Quote:
Le Fantôme de l’Opéra is a two-player game based on the Mr. Jack game system – that is, the game is an asymmetric affair in which one player wants to reveal which suspect token on the game board represents the opponent, with both players taking turns moving all of the suspects to alternately reveal and hide information. That said, the game differs in a number of ways from Mr. Jack. In more detail...

In Le Fantôme de l’Opéra, eight suspect tokens stand in the ten rooms of the Opéra Garnier. Each suspect has a reason to drive the opera singer La Carlotta away from the production, and at the start of the game one of the suspects is randomly determined to be the true identity of the Phantom player. The other player is the Investigator, and he wants to discover the Phantom's identity; if he does so before La Carlotta flees the Opéra Garnier, then he wins. Otherwise, he loses. (To balance play between newcomers and experience players La Carlotta's starting position can changed.) 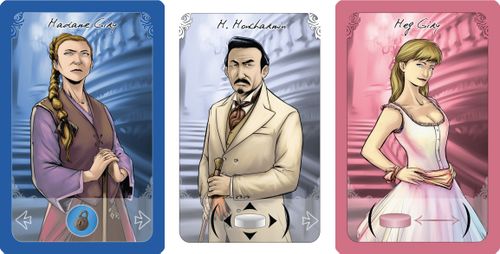 Quote:
For each even round, the remaining four suspect cards are revealed, and the players again move characters and use their special abilities, with the Phantom going first. The game continues until only a single suspect is not innocent or La Carlotta flees France for the safety of Milan.

When a character moves, it can move up to as many spaces as the number of characters in the room from which it moves. Most characters can move only through open corridors, but Meg Giry can use secret passageways that connect many of the rooms. The players must use Meg's ability and the other characters' special abilities to hide or reveal information. One character, for example, moves a padlock that blocks one corridor, while another is responsible for the roaming blackout that allows the Phantom to operate in darkness (or at least provide cover for his activity elsewhere). One sweet character can draw everyone from adjacent rooms to her side, while an unpleasant fellow can drive everyone away. Still another reveals (or hides) an alibi card, clearing one suspect (or keeping his true nature unknown). Every character is useful in the right situation. You just have to learn what those situations are... 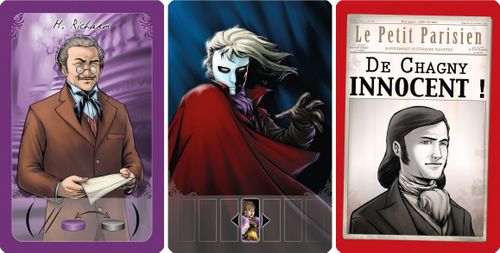 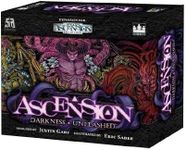 • U.S. publisher Stone Blade Entertainment plans to debut Ascension: Darkness Unleashed at Gen Con 2013 in mid-August ahead of the game's retail debut on September 18, and SBE's Brian Kibler has passed along details of what's new in this set, along with a few card images:

Quote:
Ascension: Darkness Unleashed is both a standalone game for two players and an expansion that can be combined with Ascension: Rise of Vigil or other Ascension games. 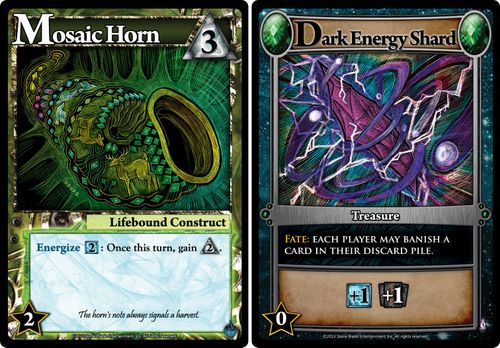 Quote:
This set also features new Energize cards, including Heroes, Constructs and Monsters that transform into new beings or more powerful versions of their original selves. If you would play a card that has a Transform ability and you've met the Energize threshold on that card (by having played a certain amount of energy that turn), then you ignore all the effects on the original card and place the transformed card in your hand, which can now be played this turn and on future turns for the remainder of the game. (Ascension: Darkness Unleashed contains both double-sided transform cards for those who play with card sleeves and single-sided transform cards for those who don't. In the former case, you remove the card from the sleeve, flip it to the transformed side, then resleeve it; in the latter, you remove the original card from the game and bring in the transformed card.)

Other cards – such as the monster "Erabus, the Exiled" – are transformed and added to your hand when you defeat them in the center row. At the end of the game, you score Honor for whichever version of the card is currently active in your deck. 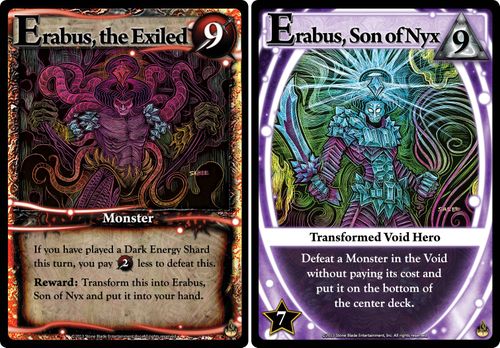