• On July 23, 2013, Erik Chevalier of [company=22549]The Forking Path, Co.[/company] announced that his publishing efforts to bring The Doom That Came to Atlantic City to market had gone bust – which came as a surprise to those who had backed the publishing project on Kickstarter to the tune of $122,000. Designer Keith Baker and artist Lee Moyer were among those surprised by this announcement, as Chevalier had been assuring them and others that the project was well on its way toward production, after multiple bumps and detours along the way. Kickstarter backers immediately started filing fraud charges in Oregon, Chevalier's home state in the U.S., and Baker and Moyer promised to get a print-and-play version of the game to backers so that they'd at least be able to play the game, even if not in the intended format.

Enter Cryptozoic Entertainment, with a July 31 announcement that stunned all who knew about this situation:

Quote:
Cryptozoic Entertainment...announced today that it will be publishing the board game The Doom That Came to Atlantic City...

Moyer and Baker have fought to bring this whimsical game of cosmic horror to life for over a decade. In 2010, sculptor Paul Komoda joined the team with his unique vision of the terrifying Old Ones. In 2013 it seemed that the stars were finally aligned...until the surprising announcement that the project was abandoned.

"We were really shocked to hear the news about this last week," said Scott Gaeta, Cryptozoic's chief operating officer. "The game looked fantastic and I thought that we might be able to help, so I contacted Keith right away. Keith and Lee told me that taking care of the Kickstarter backers was the most important thing to them and I couldn't agree more. That's why we are going to be fulfilling all of the Kickstarter game orders ourselves."
Yes, Cryptozoic is going to ship out copies of the game to the 1,200+ backers of the Kickstarter project, an amazing gesture of goodwill that has undoubtedly garnered more attention and positive publicity for the company than it could ever buy for the same cost. A bit more from the Cryptozoic press release:

Quote:
"Our first priority is getting the game produced and in the hands of the Kickstarter backers," said Gaeta. "We are already working with the factory and should have a date we can share in a few weeks. We are also going to be demoing the game at Gen Con and the upcoming Alliance Open House. This game is just too much fun not to make it available to gamers everywhere."

• Russian publisher Rightgames LLC has signed a distribution agreement with U.S. based Alliance Game Distributors, according to Svetlana Kolesnik, manager of Sputnik RBG, which represents Rightgames in Germany, and by the end of August 2013 its titles should be available at stores that use Alliance for distribution. To promote its line of titles, the best known of which is Evolution: The Origin of Species, Rightgames is appearing at Gen Con 2013 in mid-August to demo and sell its line. To see all of the titles available at Gen Con from Rightgames, head to this game listing in BGG's Gen Con 2013 Preview.

Quote:
Shadowrun: Crossfire is a cooperative deck-building card game for two to four players set in the gritty, cyberpunk fantasy world of Shadowrun. Play a shadowrunner team and take on tough jobs such as protecting a client who's marked for death, shooting your way out of downtown when a run goes sour, or facing down a dragon. In each game you'll improve your deck with a mix of strategies, while earning Karma to give your character cyber upgrades, physical augmentations, magical initiations, weapons training and Edge.
Catalyst has not announced a release date for Shadowrun: Crossfire. 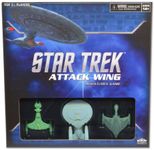 • In May 2013, I posted about a six-month-long Organized Play program titled "The Dominion War" by WizKids Games for its HeroClix miniatures game line Star Trek: Attack Wing. Here's a more detailed overview of the event than what I posted previously:

Quote:
In "The Dominion War", the Alpha Quadrant is in a time of struggle and chaos. The Jem'Hadar and the Breen Confederacy have established a presence for themselves in the Alpha Quadrant, and with the help of their recent allies, the Cardassian Union, they plan to conquer everything in their path. This engagement proves to be the most devastating ever fought in the Alpha Quadrant.

In the storyline Organized Play program, stores carrying Star Trek: Attack Wing will host tournaments for players to challenge each other for dominance of the Alpha Quadrant. Players will collect a participation prize each month as well as compete for a new playable ship that will only be offered via the Organized Play events. The player with the best record over the six-month event will be bestowed the title of Fleet Admiral and awarded a special grand prize at the end of the program.
A new playable ship available only through the Organized Play events? That's a nightmare for some, and a sweet dangly piece of cheese for others. WizKids Games now has a page on its website devoted to "The Dominion War" that details the setting, special rules and prizes for four of the six months; eventually WizKids plans to include location information for stores participating in "The Dominion War" program. And what's the grand prize? This: 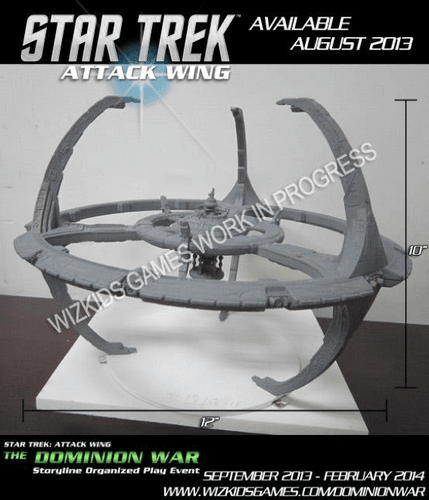 From the press release: "The Star Trek: Attack Wing Deep Space 9 miniature will be approximately 12" in diameter and 10" in height. It will be fully playable in the Star Trek: Attack Wing miniatures game as either Deep Space 9 or a Nor-Class Space Station – and will include its own unique crew, tech and weapons upgrade cards and game tokens... A painted pre-production copy of the Deep Space 9 miniature is planned to be on display at the WizKids Games booth at Gen Con."