• August has only just started, but the details of games available at Spiel 2013 keep coming. Here are three titles that Japon Brand – a company that works with independent Japanese designers and publishers to present their work to buyers worldwide – plans to have available in Essen, Germany in October. Japon Brand has passed along names of other Spiel 2013 titles, and I've added those titles to the Spiel 2013 Preview, but these three have full descriptions (because I wrote them), so let's look at them for now, starting with Eggs of Ostrich, a three-player-only card game from Shinpei Sato:

Quote:
Eggs of Ostrich is the name of the game, and ostrich eggs are what you're trying to claim.

The three players in this game each start with four sacks, numbered 2, 3, 5 and 7. They have five claim cards in hand, one for each sack and a "skip" card. Nine egg cards (valued 4-10) and three amber cards are shuffled, then two cards are removed from the game.

In each of the ten rounds, someone reveals the top card of the egg deck, then each player simultaneously chooses and reveals a claim card. All players who didn't choose "skip" divide the eggs equally amongst themselves, then place these eggs in the sack that matches the card they played. Each player then sets aside the claim card he used, leaving it out of play for the next round, after which it returns to his hand.

If an amber card is revealed, then if only one player plays "skip", he claims the amber, setting it next to his sacks; if no players or two or three players play "skip", then no one gets the amber.

If a sack ever holds more eggs than the number on the sack, it rips and all the eggs fall to the ground and break. Pity. That player covers that sack with the matching claim card, which is now out of play for him. 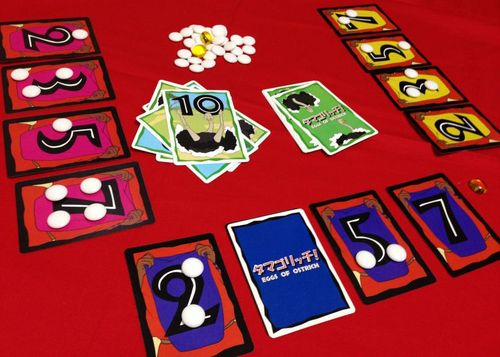 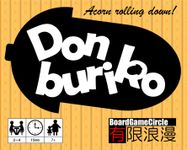 • Masanofu's Donburiko gets its setting and theme from the children's nursery song "Donguri Korokoro" (どんぐりころころ), in which acorns roll down from the hills into the ponds, first excitedly playing with the loaches – a type of freshwater fish – only to then pine for the mountain left behind. The last line of the song: "He cried and the loach didn't know what to do." Poor homesick acorns. Here's a rundown of the gameplay:

Quote:
Each player starts with a few chips, each worth a point. The 16-card deck – which consists of two loaches (worth 0), four ponds (worth -1 or -2) and ten acorns (worth 1-5) – is shuffled, then a number of cards equal to the number of players are laid face-up. Each player receives a hand of 3-4 cards.

On a turn, a player either places a card from his hand into one of the columns or claims one of the columns. When placing a card, he can lay it face-up (taking one chip from the bank) or face-down (placing one of his chips on the card); when taking a column, it must have at least two cards and at most six.

After taking a column, the player sums the cards in that column, with a loach turning the negative ponds positive and with two of the acorns worth either 1 or 5 at the player's discretion. If the column's sum is between 0-6, the player takes that many chips from the bank; if more than 6 or less than 0, he pays the difference to the bank. This player is then out of the round, while the others continue to play cards or take columns.

A round ends when no columns remain, columns with only one card remain, or someone scores 6 chips from a column; in the latter case, the round ends immediately, and no one else scores anything. Players then start a new round. When the bank empties or a player has 20 or more chips, players complete the current round, then the player with the most chips wins! 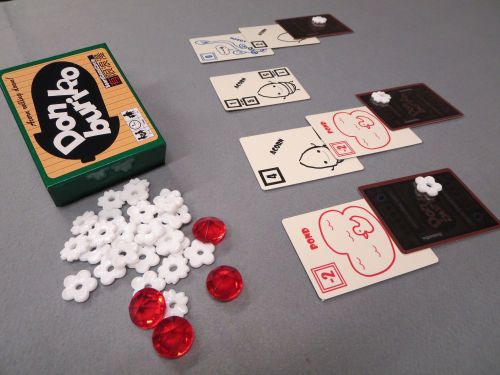 • Finally (for now) is Takahiro's Skirmish! The Scramble, a two-player card game in which your monsters tussle over unclaimed treasure:

Quote:
Each player has a small deck of numbered (1-9) monster cards, five spells and two dummy cards. (For players of uneven skill, the more experienced player can shuffle additional low-valued "newb" monsters into his deck.) Each player shuffles his deck, takes the two dummy cards in hand, then fills his hand to six cards. Players shuffle the seven-card treasure deck (valued 1-7), then lay out five cards face down.

A round starts with the players revealing the value of the treasure. Each player first lays out a single card face down, then they reveal these scout monsters and refill their hands. They then lay down two cards face down, then reveal them. A player can include one spell in this pair of cards, and the spell might, say, steal an opponent's weakest monster or kill all monsters other than the undead. Whoever now has the highest monster total claims the treasure.

The first player to win two treasures valued 1-4 claims a crown card worth 7 points. If a player claims four of the five treasures, he wins instantly; otherwise players tally their points after the end of five rounds to see who wins! 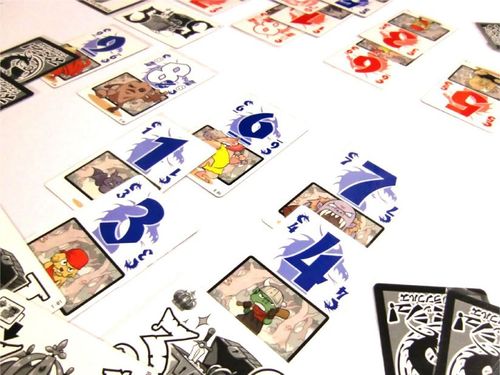 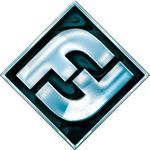 • Turning 180º in the opposite direction, U.S. publisher Fantasy Flight Games has announced a new cooperative game set in the Lovecraft Mythos already present in FFG's Arkham Horror and Call of Cthulhu: The Card Game. Eldritch Horror, due out Q4 2013 and available for demo at Gen Con 2013 in mid-August, sends players across the globe in search of the Ancient Ones so that they can keep that globe in good shape. Here's an overview of the game's setting and gameplay:

Quote:
Across the globe, ancient evil is stirring. Now, you and your trusted circle of colleagues must travel around the world, working against all odds to hold back the approaching horror. Foul monsters, brutal encounters, and obscure mysteries will take you to your limit and beyond. All the while, you and your fellow investigators must unravel the otherworldy mysteries scattered around the globe in order to push back the gathering mayhem that threatens to overwhelm humanity. The end draws near! Do you have the courage to prevent global destruction?

Eldritch Horror is a cooperative game of terror and adventure in which one to eight players take the roles of globetrotting investigators working to solve mysteries, gather clues, and protect the world from an Ancient One – that is, an elder being intent on destroying our world. Each Ancient One comes with its own unique decks of Mystery and Research cards, which draw you deeper into the lore surrounding each loathsome creature. Discover the true name of Azathoth or battle Cthulhu on the high seas.

While the tasks on these Mystery cards (along with the locations of otherworldly gates, menacing monsters, and helpful clues) will often inform both your travel plans and the dangers you confront, you can find adventure anywhere in the world...even where you least expect it. It is during the Encounter Phase of each turn that players resolve combat or, alternatively, build their investigators' personal stories by reading an encounter narrative from one of several types of Encounter cards. You might go head to head with a monster in Istanbul or find yourself in a tough spot with the crime syndicate in a major city. Maybe you will embark on an expedition to the Pyramids or research a clue you uncover in the unnamed wilderness. You may even find your way through a gate and explore a dimension beyond time and space.

Should you fail an encounter, the cost is steep. If you are fortunate, you will merely incur physical or mental trauma. However, you might also be compelled to take a Condition card, which represents a specific injury or restriction gained throughout your journey, such as a Leg Injury or Amnesia. You could find yourself getting in over your head to acquire assets and receive a Debt condition – or maybe you'll owe a favor to something far more insidious than a debt collector, and enter into a Dark Pact! Whatever your condition, you would be wise to find a resolution with haste; many conditions have a "reckoning effect" which, if triggered, ensure a much more sinister fate.

All the while, the arrival of the Ancient One approaches. Its malign influence is manifested in Eldritch Horror as you draw Mythos Cards, which govern the appearance of otherworldly gates, fearsome monsters, and other ominous elements. Mythos cards keep your investigators under pressure, introducing new threats, even as the arrival of the Great Old One draws nearer! Since the investigators draw a new Mythos card each round, they're certain to have their hands full battling foul creatures and following up on strange rumors, even as they work to solve their three all-important mysteries.

With twelve unique investigators, two hundred-fifty tokens, and over three hundred cards, Eldritch Horror presents an epic, world-spanning adventure with each and every game. 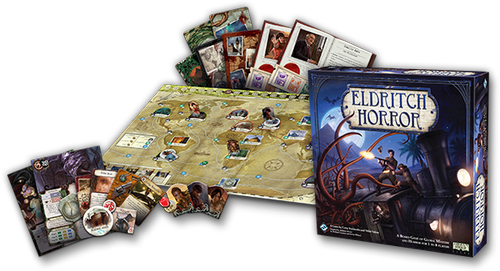