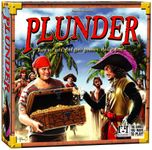 • U.S. publisher R&R Games has released information about three titles due out in late 2013 and aimed for a Spiel 2013 debut, the first being Plunder from designer Jonathan Franklin. The title "Plunder" has been used a number of times, but if you're trying to convey a "pirates who steal treasure" theme in a single word, you're not going to do better. For now, all I have is a brief overview:

Quote:
Plunder is a deduction card game in which everyone is a pirate captain with a buried treasure. Players attempt to steal the hidden treasures of the other captains by figuring out the three landmarks that mark where each treasure is hidden. The first player to a treasure takes the largest share, while those who reach it second or third receive less. Keeping your treasure from being stolen is also worth victory points in the end. Find and steal the most treasures first to win in the end!

• The second title, from designers Ken Gruhl and Quentin Weir, is UnNatural Selection, which can't possibly be a bad game given that the cover depicts an octopus wearing a tie. That's gold! A little bit about the game:

Quote:
UnNatural Selection is an amusing tongue-in-cheek battle game in which you play creature cards to fight in an arena. Once the creatures are set to fight, you can play further cards to alter the abilities of your opponents in funny ways. The player judge for the round then selects a creature/attribute combination to win the match.

• New Haven, from designers Brian Leet and Kevin Worden, sounds like a Eurogame archetype, but details are scant for now:

Quote:
In New Haven, set in colonial New England, players must develop the riches of the land and build a thriving settlement. Players place tiles strategically to a shared game board to cut timber, quarry stone, plant fields of wheat, and fill pastures with fat sheep. Players then use these resources to erect buildings on their own village boards, attempting to complete rows and columns for population points. Whoever can build the biggest and most prosperous town will end up with the biggest population and win the game!

• To follow up on this August 2013 BGGN post about new games from German publisher AMIGO Spiel, here's information about two other new titles, both due out in September 2013. Christophe Behre's Arche Noah fits into the standard small card box from AMIGO while also revisiting the Noah's ark theme. Here's an overview of gameplay:

Quote:
With a name like Arche Noah, you know that you want to collect pairs of animals, but in this card game, you'll also be rewarded for collecting animal triplets and quarters. The more, the merrier!

At the start of the game, players receive one animal card face down from the shuffled deck; the deck includes ten types of animals, with cards numbered 1-4 for each type. The player looks at this card in secret, and takes 10-12 purple chips and 2-3 green chips, depending on the number of players.

Each round, animal cards are revealed equal to the number of players. In clockwise order from the starting player, each player bids a number of purple chips, then starting with the high bidder (going clockwise from the starting player in case of ties), each player takes one animal card and places it face down on his stack. If a player discards one of his green chips, he takes two animals instead, stiffing whoever comes last in the round!

After all of the animals have been claimed, players reveal their collection. If you have two or more animals of the same type, you score the sum of their numbers; if you have all four animals, you receive 3 bonus points; if you have only a single animal, you lose points equal to its number. Each pair of purple chips is worth 1 point.

After tallying the points, players shuffle the cards, refill their purple chips, receive one animal in secret, then play another round. At the end of that round, players score again, this time receiving 1 point for each green chip still in hand. Whoever has the highest total over two rounds wins! 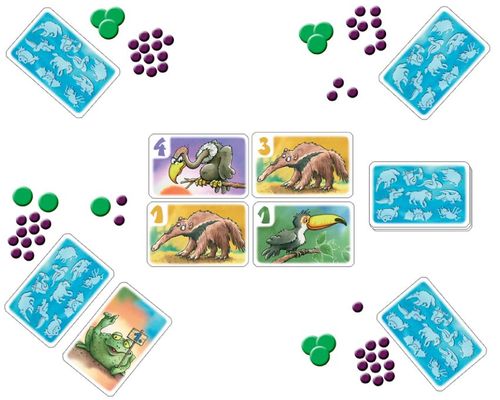 • Wrapping up the AMIGO line-up is Wolfgang Dirscherl's Pipifax, a die-rolling memory game for youngsters:

Quote:
In Pipifax, players need to find animals in the wild, and the first player to find an animal in all four sections of the wilds wins the game.

To set up, take the 24 animal tiles – which come in four colors with six animals appearing in each color – shuffle them face down, then place them in groups by color. On a turn, the player rolls the die, then turns over a tile of any color to try to find the animal that matches what's shown on the die. If she fails to do so, her turn ends; if she does find the animal, she rolls the die again and tries to find the matching animal in a different color group. This process continues until either she fails to find an animal, thereby ending her turn, or she finds one animal in each of the four color groups, in which case she wins! 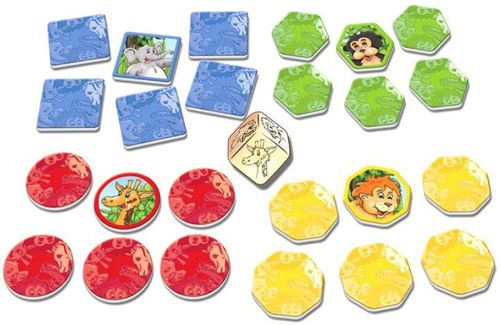