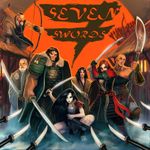 • With Gen Con 2013 out of the way (albeit with additional write-ups and news still to come), let's turn our collective heads to games being featured at Spiel 2013 in October, starting with Óscar Arévalo's Seven Swords from Spanish publisher Gen-X Games. Here's an overview of the game:

Quote:
Seven honorable and brave samurai, aided by a handful of frightened villagers, are the only defenders of the village. Will you help these villagers to fend off bandits, or will you command the thieves to steal all the rice you can and punish the insolent peasants?

Seven Swords is a game for two players in which one player controls seven samurai and the villagers to try to repel the attack of the evil villains while the other player controls the bandits who try to steal all the rice they can and destroy the village. The game lasts 18 turns, after which the player with the most victory points (VPs) wins. The samurai player begins the game with the VPs in the villagers' houses and rice stores, and the bandit player must attack peasant houses and steal rice to acquire these VPs. The bandit player can also earn extra points if he eliminates the samurai in combat.

Each turns consists of two phases. The bandit, who plays first, has seven cards in hand that symbolize the seven sectors of the village. He discards a card to give himself a number of actions that turn, and he might receive additional actions from the samurai player. With these actions, the bandit can play different bandit troops – including infantry, archers and cavalry – with which he can then move around the village and attack the samurai, villagers and rice storage. The samurai player then chooses between five chips – combat, movement, leadership and two special action chips – to see how many actions that he has that turn. A samurai can perform three types of actions – attack, move, and use the villagers to attack bandits – but only one time for each samurai until one of the special chips has removed the counters of such action. The more actions that the samurai player performs, the more actions the bandit has.

After a certain number of turns, the bandit player discards one of his action cards, then eliminates any samurai who is in the field of the discarded card. Other details in the game include bows that help players attack from a distance and fences that keep the bandits from just walking into the village. In addition to having a double-sided game board with different village layouts, the samurai player establishes the placement of villagers, fences, nows and rice storage at the start of each game, allowing for wide variability in gameplay. 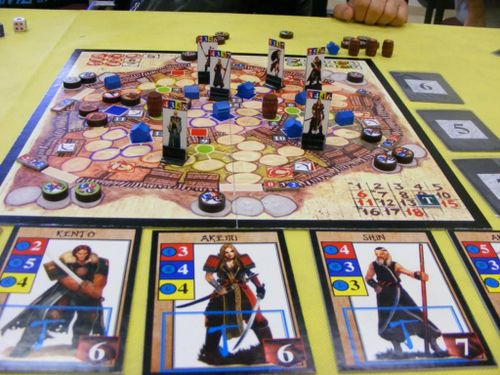 • Designer/publisher Richard Breese of R&D Games has released more details about the Spiel 2013 release Keyflower: The Farmers, co-designed with Sebastian Bleasdale, in a GeekList that details the introduction of wheat to the game, how players acquire and house animals, and what differs in the game set-up. Says Breese, "Once you start playing with the expansion, you are likely to wonder how you managed to play without the cute animeeples filling the fields and scoring you those few extra vital points. Of course, once you add the new tiles and decide to chose a random set for your game, then in some games you will have few or no sheep, or green meeples, or transport, or whatever. We feel part of the fun of the game is to meet these different challenges."

• More details have been released on Vlaada Chvátil's next release from Czech Games Edition, with that game also being a Spiel 2013 release. Here's a rundown of Tash-Kalar: Arena of Legends:

Quote:
Tash-Kalar: Arena of Legends is a game played by masters of magic. Two to four summoners encounter each other in the Tash-Kalar arena, either in teams or each on his own, and prove their skill and strategy in a short but intense battle. By clever deployment of their minions, they create magic patterns for summoning powerful beings, and then use those to destroy their opponent’s forces or to prepare patterns for the ultimate legendary beings.

The game includes three different factions, each with a unique deck of beings to summon and one deck of legendary creatures. Players take turns placing their common pieces on the board, and if they succeed in creating patterns depicted on one of the cards in hand, they may play it. When played, the card summons a particular being and allows the player to perform an effect described on the card: a giant destroys neighboring pieces, a knight moves through enemy pieces, a warlord orders previously placed pieces to move and fight, an enchantress converts enemy pieces to player's own color, etc. After that, the player discards the card and the summoned being turns into a motionless piece which may be used in patterns for summoning other beings – or even be awakened and moved into combat by the effects of other cards.

Tash-Kalar: Arena of Legends offers two game modes. In the standard mode you score points for fulfilling various quests set by the Arena Masters: controlling certain points or areas of the arena, destroying a number of enemy pieces in a single turn, performing a certain combination of summonings, etc.

In melee mode, your only goal is to entertain the crowd. You do that by destroying your opponents and making them beg (i.e., making them use the catch-up mechanisms) and by summoning legendary beings. After all, people want to see a dragon! Both modes can be played as a two-player duel or as a team game with teammates sharing pieces and legendary cards, but with each controlling his own faction. (The game includes a duplicate of one faction in a different color.) The melee mode can also be played as a fierce free-for-all battle, but don't expect alliances; to achieve a good score, you need to destroy all opponents evenly as you track points scored on each opponent separately, and your lowest score is your final score. 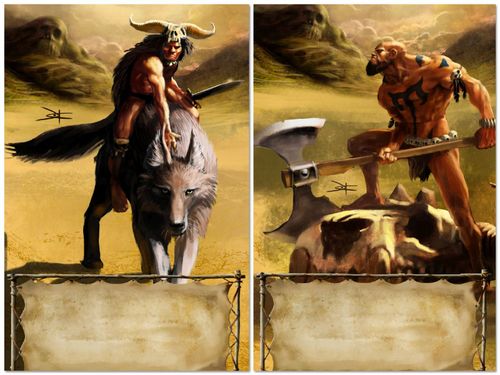 For now, only card artwork without details (Image: Lenka Holubova)

• Finnish publisher Lautapelit.fi is working on Eclipse: Ship Pack One, an expansion for Touko Tahkokallio's Eclipse. Details about this expansion pack are slim now, with Lautapelit.fi's Toni Nittymaki noting that it contains six sets of ships and star bases in the colors of the base game, a Terran/Magellan player board, and some other material to be specified later. He also notes that should this ship pack go over well, then a second ship pack would follow in 2014 or 2015 and "by then, we hope to have second full expansion for Eclipse out".

As for when this will be released, Nittymaki says, "The pack is coming out very late in 2013, but we will attempt to fly in some for Essen." 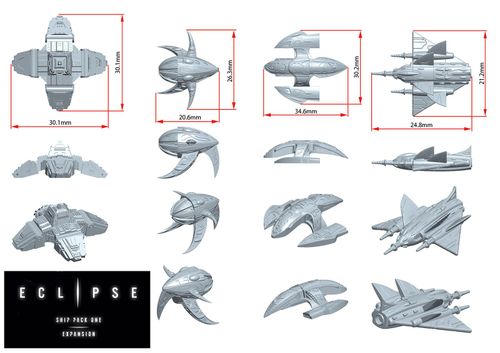 A preview of the ship designs