• North American publisher Mercury Games has announced a second title, in addition to The Capitals, that it plans to release before the end of 2013: Travis R. Chance's Infamy. Here's an overview of the setting and gameplay:

Quote:
In the Martian mining colony of ARES-6, crime pays. Three factions vie for control of this corrupt new world and everything within it. You are a mercenary known as a "freelancer", here to profit off the conflict, to make a name for yourself – but ambition alone isn't enough. A network of seedy contacts will assist you in undertaking the dangerous missions necessary to bolster your rep. Whether it's hiring henchmen to carry out your dirty work or plotting with secret schemes, you'll let nothing stand between you and your squalid goals.

In Infamy, players find that nearly anything can be bought for the right price. Players attempt to win the game by being the first to reach 15 Infamy points or by reaching the highest reputation level in any one of three factions: the Harada Cartel, the Trust Megacorp, or the PKD Militia. The core of this auction and influence game is the "Pay to Play" mechanism in which players must sacrifice bidding power in order to place any bids at all. Spend too much time bidding against an opponent, and your currency will dwindle – but if you refuse to bid, you'll be forced to watch your opponent acquire all those things that only the criminal underworld can deliver.

Here at the end of the world, where everyone and everything has its price, there is but a single ambition that endures: Infamy.
Mercury Games' Kevin Nesbitt explains the bidding in more detail: "Essentially, each player has a limited amount of currency tokens that he can use in any one day, and the placing of a bid costs one of those tokens, even if you don't win. So if I bid two tokens, I have to pay one as 'costs', then place down my bid of two. If you then bid three (at a total cost of four), then I either have to pay more costs to bid again, or else retrieve my bid and forfeit my costs." The complete rules can be downloaded from the BGG game page linked to above.

By chance, I ran into the designer while waiting in a line at Gen Con 2013, but since Mercury had not yet announced the title, he didn't want to spill the beans too much, mentioning only that an announcement was coming. He did, however, wax enthusiastically over comic artist Sean Chen, noting (if I recall correctly after enduring four days of conventionitis) that Chen depicted all of the Iron Man story arcs now being made into movies and he worked with Chance on the look of the game before Mercury became involved.

Mercury Games plans to run a Kickstarter project for this release, with the project starting by mid-September 2013. 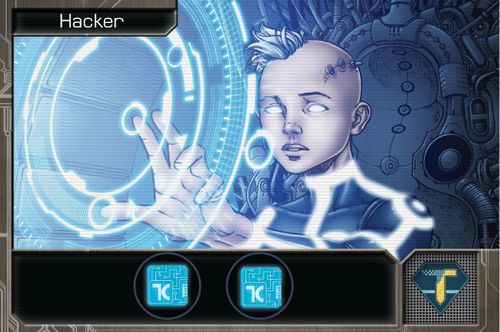 • Sean Brown, a long-time employee of FRED Distribution, which publishes games under the brands Gryphon Games and Eagle Games, has stepped down from full-time employment with FRED to publish games under his own imprint: Mr. B. Games. While Brown has published a couple of games under this imprint since 2006, effectively he's launching this business with the 2014 release of Alien Uprising, from himself and designer Richard Launius. A description of the game in question:

Quote:
Tensions have been high with the alien "bug" races of the galaxy – the Zothren – and your ship has crash landed on the planet Hive IV, one of the more renegade "bug" planets. You quickly set up perimeter force fields and begin surveying the surrounding terrain for debris from your ship, only to find it scattered everywhere. Then you see them – at first only a few "bug" scouts, but then the numbers begin to increase all around you: archers, slashers, and even the monstrous brutes. This is more than a scouting party; this is a war party! They begin to attack the shields as the crew starts to retrieve debris. The SOS has been sent and a ship in the sector has responded, but can it get to you before the "bugs" overwhelm your crew? Can you repair parts of the ship and use it as a defense? Can you repair the hull and fire up the engine to lift off? It's all in the hands of the crew – your hands.

In Alien Uprising, the player crew must either hold off the Zothren attacks until the rescue ship arrives, or repair the ship and lift off from the hostile planet before being destroyed. To achieve either of these goals, the crew must work together, using their unique skills and chosen actions to perform a number of tasks, defend themselves, and retrieve and repair equipment and the ship.

To establish the actions available each turn, the first player rolls custom dice, then each player chooses an action for the turn, starting with the first player. The available actions include combat, engineering, reload/recharge first aid, scout, and wild; the dice also have an alien icon that shows the speed of the enemy while limiting the actions that players have available to them. Players also have unique character skills, and the game can be set to higher levels of difficulty for more experienced players.
Writing about the game on BGG, Launius says "...from theme, to art, to challenging game play it is going to be one of my best cooperative games. It is one of my big game designs again (like Arkham Horror and Defenders of the Realm), but playing time is a little quicker than either of my other big games. Of course, I may be biased in my opinion of how good this game is, but there has been more development and testing in this game than any other of my designs to ensure the right balance of decision making, challenging play, and scenarios to ensure continued challenges as players grow in experience." Mr. B Games hopes to fund Alien Uprising on Kickstarter in September 2013. 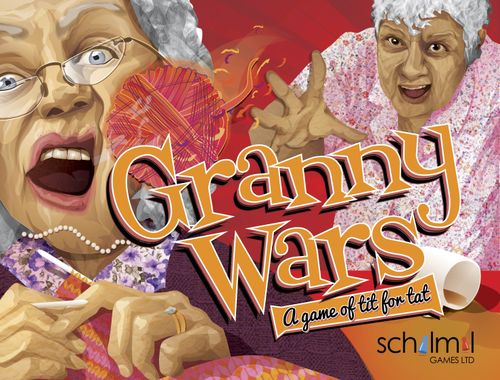 • New Zealand publisher SchilMil Games, Ltd. plans to release Granny Wars: A Game of Tit for Tat from the design trio of Amanda Milne, Julia Schiller and Brad Thompson in November 2013, and the cover image is so awesome that I had to bump up the size to medium to show it off. "Knit one, purl to the face!" As for the gameplay, here's a summary:

Quote:
Your Granny's position as the town's top handicrafter is threatened by upstart contenders from a new retirement community. Your task is to try to help her, while distracting and sabotaging her competitors – but if you don't keep your loyalty hidden, the other players will definitely stitch you up!

At the beginning of Granny Wars: A Game of Tit for Tat, you receive a loyalty card matching one of the Granny cards on the table, and you are dealt ten cards which range from -5 to +5 points. The deck also includes Gold cards, which grant a special Granny power (like "Nana Nap") in addition to points. Players take turns adding cards to the Grannies, and the "Tit for Tat" mechanism allows a player to "bounce" an equal and opposite card from one pile to another, e.g., playing a +3 on a -3 lets you move the -3 to another pile of your choice.

After everyone has exhausted his cards, players reveal which Granny they supported and sum the points in her pile of cards. The player with the highest sum wins!
• As noted on ICv2, Gale Force Nine has acquired the board game license for the motorcycle gang television show Sons of Anarchy, with a flyer for the forthcoming game included in copies of Firefly: The Game sold at Gen Con 2013.

• In a Gen Con 2013 round-up of deck-building games on Opinionated Gamers, Matt Carlson mentions a Marvel Comics-themed dice-building game from WizKids Games that is not based on that publisher's Quarriors! dice-building game. Says Carlson, "It is a two-player game of Avengers and X-men. Each player brings their own set of 20 dice of eight types for their personal dice pool – and then stuff happens." WizKids' Scott D'Agostino confirms that this game is in the works, but no release date or other details are available at this time.

• U.S. publisher Z-Man Games has announced the 2014 release of Clash of Cultures: Civilizations, an expansion for the Christian Marcussen design that adds fourteen different civilizations to the Clash of Cultures base game, with each civilization having unique advances and different leaders. This expansion also includes new City pieces so that players can increase the size of their cities (while still being limited to placing at most four city pieces around their settlement).

Elephants and horses are also included in this expansion; not real ones, mind you, but tokens to use while playing the game, with only some civilizations having access to them in order to duplicate what happened in real life so long ago. 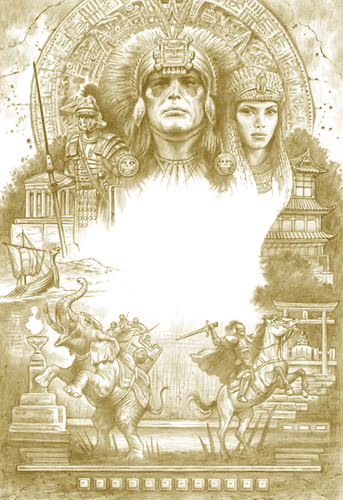