• Dutch publisher Quined Games has announced two releases that will be available at Spiel 2013 in October, titles #10 and 11 in its Master Print Series. The first title is Tim Harrison's American Rails, which Harrison has previously self-published and which will have new artwork and graphic design by Alexandre Roche for this edition. The description on BGG is brief, but the game kind of falls into the category of "you probably already know whether you want this or not, assuming that you know about the game's existence in the first place", Here 'tis:

Quote:
In American Rails, each player assumes the role of a wealthy capitalist managing a portfolio of stocks and bonds in six fictional railroad companies. Through ruthless negotiation and rigorous planning, players struggle to increase the value of their holdings and reap the profits. The player with the most money at the end of the game will become the nation's first railroad baron and win the game.

Quote:
A curse is cast on you, which transports you to the magical land of Norkobia. You wish to return to your earthly existence, but Lord Maldorf, ruler of Norkobia, will not let you go unless you meet his demands and build him an enormous empire.

In Warlock, you must use the skills and powers of mythical creatures such as giants, wizards and gnomes to build your empire and thwart your opponents. Each card offers four possibilities, and by using your cards strategically, you can build the biggest empire, be released to return home, and win the game.

• Klaus-Jürgen Wrede's decade-old Carcassonne juggernaut continues with the announced October 21, 2013 release from German publisher Hans im Glück of Carcassonne: Südsee, the first game of a new series titled "Carcassonne Around the World". Here's what little has been announced about the game so far:

Quote:
Carcassonne: Südsee keeps the familiar tile-laying gameplay of the original Carcassonne, with players adding a tile to the playing area each round and optionally placing a token on the tile to claim ownership of...something. Instead of the familiar cities, roads and farms, however, players in Carcassonne: Südsee use their meeples to gather bananas, shellfish and fish, then ship those goods to traders in exchange for points. 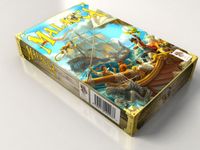 • Czech publisher Loris Games released Malacca in its homeland in July 2013, and the game – which includes rules in Czech, English and German – will also be present at Spiel 2013. Here's an overview of the setting and gameplay:

Quote:
Trade vessels sail through the Straits of Malacca. Every vessel holds cargo, which is a temptation for potential attackers (i.e., pirates). At the same time, a fortune can be made by peacefully trading with these vessels – as long as they are not looted by others. The players are ship captains – famous captains of history such as Henry Morgan, Pierre Le Picard, and Sayyida al Hurra – who can trade with these vessels, attack them, or defend them from attacking players; what's more, the Governor of Malacca offers special privileges for those who choose to defend the vessels against pirates. The money you earn can be spent on new powerful equipment available on the local market.

Malacca is a fast-paced card game based on estimating other players' strategy and choosing the right play and wager. You can best your opponents by estimating their strategy and utilizing it for your own purposes. Whoever acquires the biggest treasure after twelve rounds wins!
• In a bit of non-Spiel 2013 news, U.S. publisher WizKids Games and designers Mike Elliott and Eric M. Lang have built upon the success of their dice-building game Quarriors! with the new two-player title Yu-Gi-Oh! Dice Masters, which is due out Q1 2014 and serves as the first release in a new family of games titled "Dice Masters". An overview of the gameplay:

Quote:
Yu-Gi-Oh! Dice Masters is a dice-building game that features custom dice representing various characters from the 4K Media show. Each player brings a set of dice to the table; these form his team, from which only he can purchase dice. In addition, each player brings two basic action cards, which are placed in the center of the table; both players can purchase them.

During a turn, a player draws and rolls a number of his dice, purchases additional dice, and fields character dice to attack the other player. A player wins once the opposing player has been reduced to zero life.