• For Spiel 2013, designer Spartaco Albertarelli is releasing a new edition of Dice Run – first published in 2002 from Kidultgame – through his own KaleidosGames. Here's a rundown of this racing game in which you get to pretend that dice have legs:

Quote:
Dice Run includes thirty dice, with six dice in each of five different colors. To start the game, you roll these dice on the table to form the starting pack of runners. Each player has a hand of three movement cards and four secret target cards; these latter cards show a die with a particular number and color.

At the start of the game, the movement deck is seeded with four stage cards valued 3-6. When a stage card is revealed, players each simultaneously reveal one of their secret target cards. (If a player used a target card for movement, he must choose this card.) For each die in the leading group that matches the color of this card, the player scores 1 point; he also scores 1 point for each matching number. If a die is identical to his target card, he scores 1 bonus point as well. Whoever has the highest score claims the stage card, which is worth 3-6 stage points. The players with the second- and third-highest scores receive 2 and 1 stage point.

After four stages, the player with the most stage points wins!

• Can I create an entire new game post from dice games that will be available at Spiel 2013? I covered Sphinx's Die Ratten im Gemäuer on Sept. 10, so I missed out on a chance to include that game by a couple of days, but thankfully amongst the more involved offerings from German publisher Lookout Games comes Karnickel from designer Brett J. Gilbert and artist Klemens Franz. Karnickel, which will include rules in six languages, is far more straightforward than Lookout's other releases like Caverna and Bremerhaven, but perhaps Lookout is now aiming to attract the family market in addition to grabbing the gamers:

Quote:
In Karnickel, each player places his rabbit on the circular train track made of eight interchangeable tiles, sets the train engine on its start space, then takes turns rolling the custom dice. After you roll, set any die that shows the "train" out of play, then count up how many times each of the player colors appears on the remaining dice; you must move one of the rabbits (yours or another player's) clockwise around the track the full number of spaces. You then pass the rabbit dice to the next player. Players take turns, each time rolling only the dice passed to them and hopping the rabbits from tile to tile, trying to land on the tiles where they will be able to collect the most carrots.

When a player rolls only trains, the rabbit hopping has to stop as the train is ready to move! That player rerolls all seven dice, counts up the number of trains rolled, then moves the train that many spaces around the track. Every rabbit on a tile that the train moves through is scared away by the engine and hops off the track, failing to collect any carrots this time. All rabbits still on the track after the train moves — either because the train didn't reach them or because they were on one of the two tunnel tiles — get to grab 1, 2 or 3 carrots...or maybe lose one — exploding carrots are a risk!

Everyone then hops back onto the track, and the next player rolls all the dice to start a new round of play. Whoever has the most carrots when one player has at least eight carrots wins!

• Okay, here's at least one more dice game for the stalkers at Spiel: DubbelYatzy from Swedish designer Per Landberger and his own yonjuni games. Here's an overview of this twist on a familiar game:

Quote:
DubbelYatzy is based on the Swedish version of the classic dice game Yahtzee ("Yatzy" in Swedish), but whereas Yatzy uses normal six-sided dice – with players rolling to achieve combinations like a full house, a straight and "lots of 6s" – DubbelYatzy includes special double dice, with a smaller die inside each larger transparent die. You still want to achieve combinations with your die rolls, but now you score a combination each with the inner dice and the outer ones. Thankfully, you have some wiggle room when shooting for combination targets as you roll six double dice, but use only five outer and five inner dice when scoring combinations, with you choosing each five as you wish.

DubbelYatzy uses standard Swedish Yatzy scoring rules, which are somewhat different from Yahtzee rules, but can also be played with international or German Yahtzee scoring. 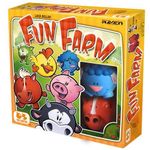 • Hmm, what else? Bang! The Dice Game I covered in June 2013, and I included Quantum in a news post earlier that same month. CV? Yes, I covered that as well in June 2013. (I'll mention in passing that I've now played a prototype of CV, but with incomplete rules, so I can't judge it well at this point other than to say that it hits my dice/special powers/silliness meters in the right way, so I hope to play it properly soon and report back to you all.) Fun Farm? No – I didn't write about that one yet. Success!

Luca Bellini's Fun Farm will appear in an English/Italian edition from Post Scriptum (with other publishers releasing the game in other languages), and it's a quick-playing dice-rolling pattern recognition game. Here's a summary:

Quote:
The animals have escaped from the farm! You need to bring them back before they get into trouble – and you want to do so faster than your opponents so that you can save more than they can!

In the fast-catching game Fun Farm, players compete to spot and catch the animal shown on the cards before all their opponents. Each round, the active player reveals the top card from the deck, placing it next to any others still on the table. Each card depicts an animal, a black die (showing one color on this die), and a white die (showing one color on this die). The player then rolls the black die and the white die. If a die depicted on a card matches the color rolled on that die, players race to grab the animal toy from the table that matches the animal depicted on the card. Whoever does so first claims the card, and once the deck runs out, whoever has the most cards wins!
Okay, so it's not a "proper" dice-rolling game as the pattern-recognition element is forefront, but I'll take it anyway to round out this post. (And a disclosure: I edited the English rules for Fun Farm, so perhaps this game should have come to mind earlier, but things are a bit buzzy in the cranium at this point. It's that time of year again!)