• In March 2013, I mentioned a forthcoming game from designers Laurent Escoffier and Sébastien Pauchon that features Corto Maltese, the creation of comic artist Hugo Pratt. That game — Corto — is a joint production between French publishers Matagot and Ludocom, and I can now give you a full rundown of the game as Matagot has posted rules for the game. Here we go:

Quote:
Enter the magical world of adventure of Corto Maltese, the hero from the fertile imagination of Hugo Pratt. Choose your adventures, then live through them as the game unfolds. Aided by Corto and resisting Rasputin's attempts to thwart your plans, recruit your own bands of adventurers and get your hands on gold at the end of the story!

Corto is a card-based adventure game that mixes tactics and luck. To set up the game, choose four of the six quests, then place the appropriate quest boards next to one another on the table; each quest (attack the train of Russian gold, research the four aces of whale bones, meet the leopard-men, etc.) has its own deck of character and object cards that's shuffled and placed on the left side of the board. Reveal the top character from each deck, take turns placing one of your tokens on any character, then draw four cards from any combination of decks for your starting hand.

On a turn, you can either discard any number of cards and fill your hand to four cards or you can play 1-4 cards. If you play a character card, place it on an empty space on the quest board of the same color, making sure that it's adjacent to at least one other character. Place a token on the card, then either add a token to or remove an opponent's token from an adjacent character depending on the character's border color (denoting a friend of Corto or associate of Rasputin). You can also play objects on the character to affect adjacent cards. Some characters and objects have long range effects that hit any character in the same column or row. Hit a character that has no tokens, and you remove it from the board, counting it as 1 gold at the end of the game. If you played cards, end your turn by drawing two cards.

Quote:
Players can also move Corto and Rasputin directly, using them to block spaces on the quest board, claim gold immediately, or eliminate characters.

In addition to having its own mix of characters, objects and advantages, each quest has a different treasure waiting for players to nab. For "The Wreck of the Fortune Royale", you need to be the first to claim the aces in order to claim all the treasure for yourself; for "Admiral Kolchak's Bullion Train", if you attack the train — which moves across the quest boards as players lay down cards — you claim one of the train car tokens, which might have gold on it; for "On the Track of the Leopard Men", whoever has a majority of tokens on certain characters at the end of the game gains control of markers that might enhance their network of characters.

When two quests are fully occupied or the players run out of cards, the game ends. In addition to scoring for the gold and treasures they've collected during the game, each player scores 2 gold per character in the largest group of characters he controls and 1 gold per character for smaller groups. Whoever ends up with the most gold wins!
As a former manager of a comic book store and a fan of European comics, I'm already in love with the look of this game. Best of all, believe it or not, is the look of the rulebook, which I've excerpted below. In 2008, Swiss publisher GameWorks, which Pauchon co-owns, won the Essener Feder — an award for well-written and well-presented rules — for Jamaica, and I can't help but think Corto will take this award in 2014 as everything in both the rulebook and the adventure book is well-described and evocative of the subject matter. Absolutely beautiful! 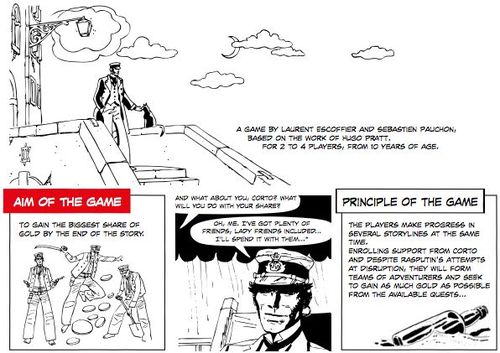