• Designer Rob Daviau and his IronWall Games has teamed with Colby Dauch's Plaid Hat Games for the 2014 release of SeaFall, a design that takes the idea at the heart of Risk Legacy — a game that creates a permanent history of your playing experience — and places it in a new setting. Dauch and Daviau talk about the game in episode 106 of the Plaid Hat Games podcast, and I've included an overview of the game below:

Quote:
SeaFall is a 4X game (explore, expand, exploit, and exterminate) set in an "age of sail" world reminiscent of our world.

In SeaFall, the world is starting to claw its way out of a dark age and has begun to rediscover seafaring technology. Players take on the role of a mainland empire that consults with a consortium of advisors to discover new islands, explore those islands, develop trade, send out raiding parties, take part in ship-to-ship combat, and more. As in Risk Legacy, co-designed by Rob Daviau, SeaFall evolves as player plays the game, setting their grudges into the history of the game and building a different narrative at every table as players open up the world. 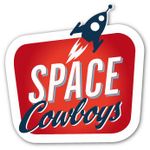 • Also due out in 2014 is Splendor from French designer Marc André and publisher Space Cowboys. Let's start with a description:

Quote:
Splendor is a fast-paced and addictive game of chip-collecting and card development. Players are merchants of the Renaissance trying to buy gem mines, means of transportation, shops — all in order to acquire the most prestige points. If you're wealthy enough, you might even receive a visit from a noble at some point, which of course will further increase your prestige.

On your turn, you may (1) collect chips (gems), or (2) buy and build a card, or (3) reserve one card. If you collect chips, you take either three different kinds of chips or two chips of the same kind. If you buy a card, you pay its price in chips and add it to your playing area. To reserve a card — in order to make sure you get it, or, why not, your opponents don't get it — you place it in front of you face down for later building; this costs you a round, but you also get gold in the form of a joker chip, which you can use as any gem.

All of the cards you buy increase your wealth as they give you a permanent gem bonus for later buys; some of the cards also give you prestige points. In order to win the game, you must reach 15 prestige points before your opponents do.
Okay, Splendor's theme is hardly original, but I've played the prototype three times now — once at Nürnberg 2013 when the game was just colors and numbers and twice at Gen Con 2013 with nearly finished artwork — and the disposability of the theme is fine for me due to the qualities mentioned in the description: fast-paced and addictive. This game hit me with the potato chip appeal of Dominion, which I had first tried in prototype form back in April 2008, as it's pretty much nothing but engine. Your turn takes seconds, and as the turns fly by you're bringing together parts of the engine so that you can go off and buy something, then rev that new part to use the gem it provides in order to buy something else and gun the engine even higher. You have a target or two for the immediate next couple of rounds while eyeing the pricey goods in the back row that carry tons of points on them and an equally difficult-to-achieve price tag since you're limited in how many chips you can collect and you're often fighting everyone else for the same things.

On top of the cards themselves are the nobles, tiles worth prestige points that everyone competes for. Whoever first acquires cards that feature the gems depicted on the tile claims that tile. If a number of the tiles overlap, you might be able to scoop up several at once, winning the game from out of nowhere. Vroom! 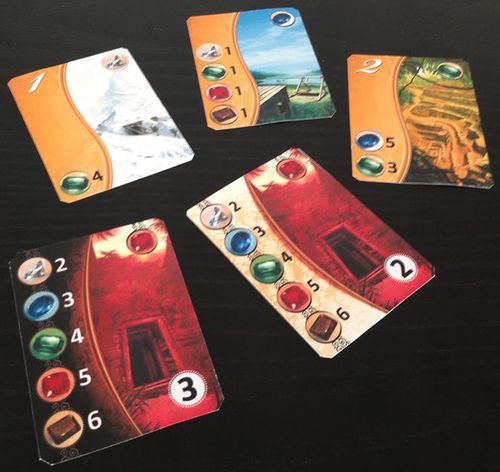 This Facebook post on the Space Cowboys page includes an uncropped version of the image above, which depicts at top three of the cards you're trying to acquire, with the cost at lower left and the "gem income" at upper right. These cards are shuffled into a number of decks, with a few cards laid out from each deck, giving players easy targets to shoot for right away while letting them plan for and build toward future purchases.

• Plenty of gamers refer to Paolo Mori's Augustus as gamer Bingo. Now designers Charles Amir Perret, Jean-Michel Maman and Vincent Lemaire present Oss, a gamer's take on the childhood game Jacks due out in late September in France and available at Spiel 2013 in October. Here's an overview of the gameplay:

Quote:
Oss is a skill game based on jacks, with players trying to perform certain tricks in between tossing their jack into the air and catching it.

Starting with the chief, each player attempts to perform the trick shown on the challenge, with the value of the tribe card played showing how many jacks on the table must be used in the challenge. A challenge might have you setting jacks on edge, throwing a jack over a wall formed by your other hand, move jacks from the table into your other hand, and so on. If at any time, you fail to catch your jack, your turn ends — although you can twice discard a tribe card from your hand to replay the challenge. If you succeed, you keep the tribe card you played.

In a duel, the first player to complete the duel keeps one of the two tribe cards played.

After all solo and duel challenges are complete, everyone participates in a final challenge to determine who will be chief for the next round. After four rounds, players tally the points on the challenge and tribe cards they collected, and the player with the high score wins.