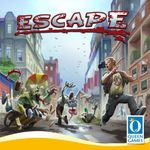 • Okay, Spiel 2013 is in the books and while we still have bucketloads of demo videos to decrypt and upload — more than two hundred! — it's time to turn our eyes toward the future and check out a few titles due out in 2014, starting with Escape from Zombie City, a Queen Games release in Q1 2014 from designer Kristian Amundsen Østby that's seemingly a cross between Østby's Escape: The Curse of the Temple and Dark Darker Darkest. Here's an overview of the game setting:

Quote:
In Escape from Zombie City, you and your fellow players are survivors of the zombie apocalypse, hiding in a church of a big city. Everything is going great — well, as great as it can be when zombies are all around — but this is all about to change as a big wave of zombies is coming to town, and they want your brainy goodness. Your only option is to gather all the necessary supplies, start up the old VW Microbus, and get the hell outta Dodge (the city)!

Escape from Zombie City is played with a soundtrack that lasts fifteen minutes. After that length of time, the zombie hordes have gotten too big to defeat, and you have lost your mind, so to speak...
Wait a minute — escaping from zombies on a 15-minute timer? That seems so familiar. Where have I heard of that before...?


Yes, Q1 2014 will see the release of two games offering you the chance to escape from zombies in fifteen minutes: the aforementioned Escape from Zombie City and Zombie 15' from designers Guillaume Lémery and Nicolas Schlewitz and French publisher IELLO. Interesting to see such synchronicity in publication, but given the apparent interest in spinning out every possible iteration of a zombie-based design, I'm not too surprised to see this pair of offerings, and they don't seem similar beyond that initial description, with Lémery and Schlewitz putting a "hot potato" spin on the real-time genre (not to mention employing quirky characters that are personalized in terms of the items they can use) while Østby repurposes his cooperative dice-rolling and tile-laying system for a new environment.

That said, if we see a third such title down the road, I'm calling a timeout on the entire game-production industry.

• Designer Bruno Faidutti has announced on his blog that Space Station Argo, co-designed with Serge Laget and first announced as a Fantasy Flight Games release in 2005, has finally found a new home with Belgian publisher Flatlined Games. In case you haven't run across this game listing previously, here's a summary of the setting:

Quote:
You're waking up from the hibernation pods. The hibernation room doesn't look like the one in which you were being sent to sleep. In the nearby pods, your comrades from the other national teams that are to help you build the new international space station are also slowly emerging from their pods. Your eyes are not yet completely open when alarms start flashing red and a metallic voice shouts from the loudspeakers «Alien presence detected, evacuation in progress, self-destruction in GRRRRZZZRRRRR minutes»...

In Space Station Argo, a group of astronauts attempts desperately to survive as they explore a mysterious space station and are besieged by horrible alien monsters.
Faidutti notes that the title will probably change, but since the game itself has continued to change since its origin nearly a decade ago, that's not a surprise. An excerpt from his blog post:

Quote:
[Fantasy Flight Games] asked us to make some changes to the game rules, mostly adding more variety and making it a bit more complex....

This time, we had to make the game simpler, but it wasn't just moving back to our original version. Most of the changes initiated by Fantasy Flight, notably the different abilities of characters, are still there, but [Flatlined's Eric Hanuise] wanted to make the game faster and the rules simpler and more consistent. This was achieved through lots of changes, some minor, some more important. The station's modules are no longer divided into spaces, and the movement rules have been completely revamped. There are fewer modules, and their effects have sometimes changed. Aliens, which could appear only in one of their four nests, can now materialize almost anywhere in the station. They can even win the game if the players help them a bit, pushing opposing astronauts toward them or into dysfunctional teleporters. And we're still working on the prototype to make the game even more fun, simple and nasty.
(And for those who want to point to this title as a reason not to delete cancelled games from the BGG database, yes, I can understand your point, but that's not the only issue under consideration when making such decisions.) 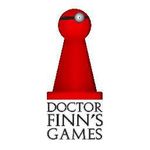 • Designer Steve Finn's next release from his own Dr. Finn's Games is Let Them Eat Shrimp!, with artwork currently being produced ahead of an early 2014 Kickstarter funding campaign. Here's a highly parenthetical description of this forthcoming release:

Quote:
Swim, spawn, and eat shrimp while avoiding sharks! In Let Them Eat Shrimp!, players place fish tiles (in various geometric shapes) in an effort to spawn (by covering fish eggs on the board) and receive more fish tiles. The fish can also eat shrimp (to gain victory points) and must avoid sharks (which will eat your fish, fish eggs, and shrimp).

Let Them Eat Shrimp! has two ways to play. The beginner's game is suitable for younger players, while the advanced version adds more strategy and depth, as well as more danger; in this version of the game, players might be knocked out early if they can't spawn quickly enough or if their eggs are devoured by the roaming sharks. The game also includes multiple game board components, which can be mixed and match for variety and various skill levels.
• I already posted about alea's Las Vegas Lights from Rüdiger Dorn in the days immediately following Spiel 2013, but I've now updated that BGG News post and the game page to include a few clarifications from alea's Stefan Brück, namely that the expansion — due out in April 2014 — will include two new player colors to allow up to seven players to compete at the casinos, with the gray dice serving as an eighth color if desired and if not used for their other purpose, namely for allowing a player to remove an opponent's die when placing a gray die in a particular casino.