You know what's out of control? Kickstarter projects for board and card games. Okay, that's not news to you, dear reader, as you've undoubtedly seen a continuous wave of announcements for such things on BGG (not least in this space). Kickstarting analog games is nothing special at this point, simply another distribution method that coincides with self-publication by rogue designer/publishers and the normal distribution channels that serve as the neck in the hourglass that bulges with retail stores at one end and a suffocating number of publishers at the other.

In fact, Kickstarter merges those two approaches, with the self-publisher perhaps busting through the fog of releases to generate more publicity and awareness than he ever would have achieved by simply publishing the game and trying to market it afterward (cf. Jamey Stegmaier/Stonemaier Games and Saar Shai with The Agents) and the established publishers pushing through iffy projects that they likely wouldn't publish otherwise (cf. Gryphon Games with Montage and Cowtown).

For all designers and publishers — whether established or someone pulling up to the table for the first time — Kickstarter is simply a marketing tool, a way to put a game project in front of thousands of potential buyers, both long-term gamers and casual players. Why else would someone like Game Salute run so many KS projects that have a funding goal of $500? Clearly they don't need that money to fund production. You know it, I know it, and Kickstarter knows it. Anyone who argues that Kickstarter shouldn't be used as a store (as KS itself dubiously claims) is barking into the wind, an idealist arguing for a mythical funding source exclusive to artists when such funding sources already exist: direct sales and patronage.

Yes, KS still runs game projects from plenty of dreamers who talk all about their dreamy dreams of seeing their game design in print, but such talk is froth on the water, useless to me and others who want to know the substance of this idea you're trying to sell. Don't try to sell me on your dream of being a published designer; such a dream means nothing to me, sport, because I've got dreams of my own that take priority. Instead, lay a few words on me about this project of yours and I'll see whether what you're offering meshes with what I'm hoping to play; even better, perhaps you can surprise me with something I never imagined discovering, thereby opening new continents for exploration in my gaming world. Let's see what you've got to offer this time...

• Tom Lehmann's Roll Through the Ages: The Iron Age from Gryphon Games picks up where Matt Leacock's original RttA: The Bronze Age left off. This new game "lets you build an Iron Age civilization in under an hour! Do you build provinces, raise armies, and conquer barbarians or build ports and ships to gain trade goods? Explore the strategies of Greece, Phoenicia, and Rome as you erect monuments, fend off disasters, and strive to feed your people." (KS link) In a couple of BGG posts, Lehmann has explained his view of how RttA: The Bronze Age compares to the game with the Late Bronze Age expansion as well as how Iron Age compares to those gaming experiences:

Quote:
I helped Matt develop LBA and I do enjoy playing it, but I believe that high-scoring empires in LBA often look fairly similar. They usually have seven cities, a couple of ships to swap goods around, several high-priced developments, and 1-2 large monuments. One player may really push monuments while another might eschew them, but this general "shape" occurs a fair amount of the time.

• UK publisher Black Box Games is shooting out the third title in its "Lords of War" fantasy battle game series: Lords of War: Templars versus Undead. (KS link) Hard to believe that templars could be a trend, but this is the fourth such title about templars in the past twelve months. Templars are hot, baby!

"I also do birthday parties and weddings." 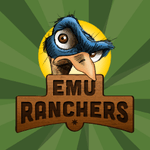 • Didn't I include P. D. Magnus's Emu Ranchers, a two-player game inspired by Lost Cities that uses the Decktet gaming system, in a previous crowdfunding round-up? Yes, I did, but that project was about funding an app with the physical game being a side order; now the KS project is strictly for the card game with the funding goal being fifthed and the app now being a stretch goal far on the horizon. (KS link) This will look nice on the shelf next to Eggs of Ostrich and Savannah Tails, and if I pick up Banjooli Xeet and a game or two about dodos, I can dedicate a small shelf to games about awkward-looking birds. Everyone needs one of those, right?

• Another rebooted KS project is David Sirlin's Pandánte, a bluffing/gambling game with special powers that kept the same funding goal but switched to poker chips that cost one-third as much as those originally included. (KS link) Adds Sirlin, "Because I had to redo a bunch of stuff anyway, I also took this chance to make a travel version of Pandánte as well as some Kickstarter exclusive extras and stretch goals where people get free stuff."

• Zeppeldrome, from newcomer 12SP Entertainment, is a "humorous, puzzle, screw-your-neighbor game with a hazardous, modular board" that after eleven days is already bearing a note that the campaign will be rebooted in January 2014. (KS link) This approach worked for the previous two projects — launch, fail, reboot, success! — so why not here? Again, Kickstarter is a marketing tool and as long as the project itself looks like good, you're unlikely to be harmed by reassessing your goals and figuring out what you can do better the next time. After all, that's a far better approach than just printing the thing and hoping for the best. 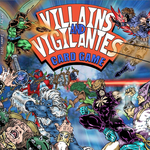 • Ben Swainback's Villains and Vigilantes Card Game looks like a blast from the past, with Jeff Dee providing some of the artwork used in the game. (KS link)

• Krosmaster: Arena - Frigost has perhaps the worst description on BGG — "an expansion to Krosmaster: Arena with new terrain and a new exclusive figurine" — but the expansion is chock full of adorable-looking li'l fighters and already funded at ten times its target, so the joke's on me perhaps for wanting a decent representative image or more details about what this adds to the base game. (KS link)

• Don Lloyd from Knight Works is trying to fund Dark Horse: Rebels & Rogues, an expansion for his western-themed Dark Horse board game that adds a Rebel & Rogue character card deck, a Progress card deck, and a Hidden Agenda card deck to the game in addition to allowing players to care about their reputation, with certain actions being allowed only to players of good or ill repute. (KS link) 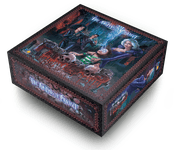 • You know what makes for a bad representative image? A 3D shot of a game box in which more than half the available space is blank, making the box small enough that you wonder whether you're looking at a box of melted crayons because you can't make out the details of anything — and with that I introduce you to The Amityville Project: Phobos from MAGE Company, the first game of three in the "Amityville Project", which is up for funding on both Kickstarter (link) and Spieleschmiede (link). Here's a long overview of the setting and gameplay from the publisher:

Quote:
Friday the 12th, 1964 — the Syndicate is an underground organization specializing in paranormal activities. They built a device capable of reshaping the personality of a human, making that person their test subject and slave to accomplish their dark plans. Their victims are the citizens of Amityville Asylum who are converted into lab rats for their demented experiments. However, not all of these people can tolerate the power of the device and they die instantly, except the detective Ed Sullivan who tried to expose the plans of the Syndicate and they trapped him. They tried the device on his mind with no foresight into what was about to happen. The detective's mind was too strong for the device and instead of reforming the detective's mind, several different personalities were born in his mind. Four different people from his memories became personalities who will now try to penetrate and reshape his mind. The syndicate thought that they could use these beloved personalities to trick the detective into doing their will...

In The Amityville Project: Phobos, each player takes on the role of one of these personalities. Your goal is to eliminate the personalities of your opponent(s). Once accomplished then your personality prevails allowing you to control the detective. Each of you chooses a "Mentality" board, eight ghost miniatures, twelve character miniatures, a d12 die and three action cards. Players then each get three Phobos cards (from twelve different possibilities) and keep these face down. These cards represent your Fears and an extension of the detective who is imprisoned inside the Amityville Asylum.

In each round, you play an action card which will instruct you to place your miniatures either on your board or your opponent's (depending on the card) trying to find their fears. If you place a miniature on an opponent's Mentality board that matches one of their fears, they are forced to reveal that fear. Then, based upon how you placed your miniature, you will have accumulated movement points which will be used to place and move your Ghosts on the main board (comprised of 16 tiles). The board includes four central halls where your ghosts enter the detective's head and twelve fear rooms which represent each of the Phobos cards. When you place two ghosts in a room which represents one of your Phobos cards, you are protected (for as long as they remain). This then makes it so that when an opponent places a character miniature on your Mentality board matching one of your fears, you are not forced to reveal your Phobos Card. It sounds simple but nothing is simple in the dream world where nightmares and demons prevail! On the other hand you can play an Adrenaline card and bring the upside down in the game. But these cards cost one of your ghost, if you to claim one.

If your Fears are revealed by your rivals, then you lose but you are not eliminated. You become a ghoul that can take revenge on the other Personalities still in play. As a ghoul, you can help control how the game unfolds by playing the right cards and destroying the rival personalities and at that point you can create a semi-co-op game with another ghoul. You have more advantages like you have more moves or you can even create a modular board. It is time to explore your personality in the ultimate interactive horror game!
An interesting setting that sorely needs a copywriter to clean up the text. As long as they can avoid a Herman's Head expansion...