• German publishers are starting to push out information on their 2014 game releases ahead of the Nürnberg toy and game fair at the end of January, so here's an overview of AMIGO Spiel's releases due out in the first half of 2014, starting with a title already known to gamers and non-gamers far and wide: Wolfgang Kramer's 6 nimmt! — more specifically 6 nimmt! Jubiläumsausgabe, a twentieth anniversary edition of the game due out in January 2014 that includes ten "joker" cards for a new variant. In case you've yet to play the game, here's a summary:

Quote:
To play the game, you shuffle the 104 number cards, lay out four cards face-up to start the four rows, then deal ten cards to each player. Each turn, players simultaneously choose and reveal a card from their hand, then add the cards to the rows, with cards being placed in ascending order based on their number; specifically, each card is placed in the row that ends with the highest number that's below the card's number. When the sixth card is placed in a row, the owner of that card claims the other five cards and the sixth card becomes the first card in a new row.

In addition to a number from 1 to 104, each card has a point value. After finishing ten rounds, players tally their score and see whether someone has scored enough points for the game to end. If not, players record their scores, then play another round. When someone does pass the point threshold, the game ends and the player with the fewest points wins!
6 nimmt! Jubiläumsausgabe includes ten joker cards numbered 0.0 to 0.9. Each player starts with a random joker in hand, and the other jokers are shuffled into the deck. Each player then receives ten cards as normal. During play, any joker card played is lower than normal cards, so it's placed first — and whoever played it can place the card at the end of any desired row. All other rules remain the same.

• Sebastian Bleasdale seems to be designing all over the map, with Keyflower and Prosperity being two somewhat involved co-designs while We Will Wok You and the new for January 2014 Lemminge are aimed at the family market. With a name like Lemminge, you know you're going to be racing little rodents across a finish line of some sort, and this design lives up to that promise. In detail:

Quote:
Each player controls two lemmings that must make their way across a game board of hexagonal spaces; most spaces contain grassland and can be entered no matter which card a player lays down, but some spaces contain special terrain (water, hills, etc.) that can be entered only when the appropriate card is played.

Each player starts with 2-6 cards in hand, with the number dependent on the player count. On a turn, a player either:

• Discards any number of cards from hand, then refills her hand to six cards, or
• Plays a card, then moves one of her lemmings.

If one or more lemmings are in your intended path of movement, you can push them aside before moving into the space, spending one point of movement for each lemming so moved. You can push your own lemming, if you set them up right — even across the finish line.

The first player to move both of her lemmings across the finish line wins. 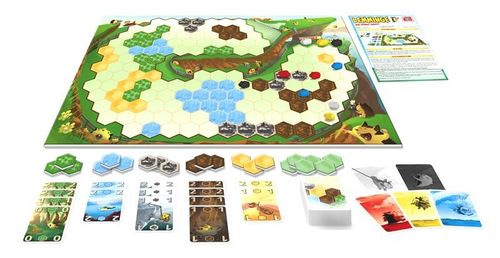 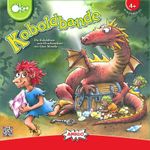 • Gina Manola's Koboldbande seems like a Lord of the Rings for the kindergarten set, with players working together to claim a treasure before the dragon reaches it first. In detail:

Quote:
Before the game begins, players seed the 6x8 game board with four keys and a candy tile by rolling two dice — one color, and another symbol — and placing the tiles on the appropriate locations on the game board. Shuffle the 27 path tiles and 10 dragon tiles together.

On a turn, a player draws a tile. If it's a dragon tile, she places it on the first empty space on the dragon path; if a path tile, she places it at the end of a path already on the board. (The first path tile is placed in the upper-left square of the game board, while the treasure is below the lower-right square.) If the path is placed on a key, the players claim the key. If the path crosses the candies, the players can place one dragon tile on the candies, delaying the dragon on its way to the treasure.

Once the players have collected three keys, they can then lay a tile on the treasure chest — and if they reach the treasure before the dragon does, they win!

• Ene mene miste... is the latest title in Reinhard Staupe's "Die Gelbe Reihe" series of educational games for youngsters. Playroom Entertainment tends to release these games in the U.S., but as long as you know the rules, you can use the components from any edition of the game. Here's a summary of the gameplay:

Quote:
Players in Ene mene miste... need to keep a sharp eye on the chalkboards to see — and sum — the items that appear more than once.

To start the game, lay out the two starting chalkboard cards, then shuffle the remaining 28 cards face-down and set 14 out of play. Turn the top card face-up and place it near the starting cards. If anyone spots an item — or multiple items — that appears on two or three cards, she yells out the combined sum of all items that appear on two or three cards. For example, if three bananas appear on one card and two on another, yell out "Five!"; if in addition one pear appears on a card and one pear appears on another, yell out "Seven!" Each player can yell out at most one number, and whoever first yells the correct sum claims one of the face-up cards, then replaces it with the top card of the deck. Whoever claims the most cards wins.

With younger players, you can lay out only two cards at a time to keep the sums smaller and minimize the calculation; with older players, keep four cards in play, possibly adding more cards to the deck to make the game last longer.

• In January 2013, designer Frederic Moyersoen posted on his blog sales numbers for Saboteur and Saboteur 2, noting that the game "sells even better and better" and in 2012 "almost 170,000 copies of both game versions were sold, which is more than the total sales of the first four years". In addition to warning new designers from expecting similar success for their own designs, he added this note: "Let's hope that the German publisher AMIGO Spiel will now be convinced to release the expansion on the German market." In January 2014, that hope becomes reality so those sales numbers must still be trending upward. A German version of Saboteur 2 should goose them still higher.

• In addition to Saboteur 2, AMIGO Spiel is producing German versions of a number of other games already on the market in the U.S. and elsewhere. For details on the gameplay of anything shown below, click on the cover image or the game link at the bottom of this post.