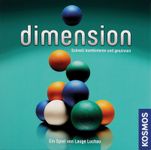 • In January 2013, while introducing some of the titles that German publisher KOSMOS planned to release in the first half of that year, I boldly predicted that Inka and Markus Brand's La Boca would win Spiel des Jahres. Turns out that the game wasn't even nominated, even though I maintain it would have been a decent pick for all of the reasons I gave at the time.

For 2014, I'll stick to introducing the games from KOSMOS and leave out any such predictions. Well, maybe — we'll see what comes up as I start adding games to the database.

First up is Lauge Luchau's Dimension, the short description of which is reminiscent of Luchau's Uluru, another KOSMOS release that dates to 2011. Here's an overview of Dimension:

Quote:
In the puzzle game Dimension six task cards are laid out each round, with these cards dictating how the balls in the game should be stacked on top of one another and side to side. These challenges aren't easy as some colors shouldn't touch one another. Fast puzzle-solving is important, but more than that in the end whoever solves the most of these difficult tasks wins.
KOSMOS always offers at least one title for the spatial-puzzle fans in the crowd, and Dimension is that title for early 2014.

• Speaking of ball-stacking, when I first saw the box for Blöder Sack, I thought this game was the masculine equivalent of Titty Grab — equality now! — but then I realized that KOSMOS would never do such a thing. (The sunglasses on the bag should have been another giveaway.) No, instead this is a dice game of some sort from designer Ralf zur Linde, and while we're waiting for KOSMOS to publish game rules online for its 2014 releases, I'll pass along all of the description that I was able to grasp:

Quote:
Five "silly bags" are waiting to be won, so it's time to prove your skill at both poker and dice — but watch out as others will be trying to grab the bags, too!

Whoever thinks he knows exactly which bag to take in Blöder Sack will likely be mistaken as players again and again hunt for the bag that holds the most — and sometimes, the bag taken earliest will turn out to be the most sweet. In the end, whoever owns the most valuable bags wins. 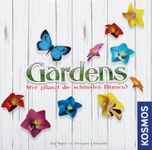 • Designer Perepau LListosella has self-published a number of games, but 2013 brought three of his designs to professional publication, including 1911 Amundsen vs Scott. Now for 2014, KOSMOS is releasing Gardens, which appears to be a design of his titled Flowers from 2008, with English rules posted (PDF) on his website. While I await confirmation from him, here's the game summary from KOSMOS:

Quote:
In Gardens, the players work together, tile by tile, to plant, reshape and grow a garden. As opportunities arise, more and more beds will be planted. Whoever is most adept at placing his favorite plants in the garden with the help of two gardener figures and creating a majority of flowers in the most beds wins. 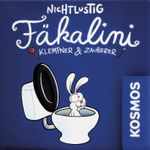 • Michael Menzel's Legends of Andor continues to expand with Die Legenden von Andor: Neue Helden, a set of four new heroes for Legends of Andor that can be used either with the base game alone or with the Der Sternenschild expansion. This expansion also includes rules that allow you to play the game with up to six players.

• In a completely different spirit, Michael Rieneck is back with NichtLustig: Fäkalini, another take on dice games within the NichtLustig brand. (A bunny in a toilet — quite appropriate for my humor this post.) An overview of the game:

Quote:
Fäkalini makes an appearance in the appropriately-named NichtLustig: Fäkalini. Who is Fäkalini, you ask? Not only is he an experienced plumber, but he's also a passionate magician, and after he finishes repairing a clogged toilet, he then performs one of his tricks.

In this dice game, players try to outdo one another by keeping good tiles for themselves, while leaving the poor tiles for others.

• German readers, I hope that you'll let me know something about Crazy Cat, which I'm guessing is an insanely popular television show or app for youngsters, but my Google-fu has turned up nothing appropriate, despite working so well on Gardens above. (So many "crazy cat" images and posts!) Why do I say that Crazy Cat must be "insanely popular"? Because KOSMOS is releasing five Crazy Cat titles in February 2014, the descriptions of which I'll tommygun here as they're all meager:

Quote:
All sorts of great things wait to be found hiding in the garbage! In Crazy Cat im Müll-Versteck, you'll need to put the puzzle together and start looking for these treasures. Who will be first to discover Crazy Cat and her things among the trash?
Quote:
In Crazy Cat: Ab in den Eimer!, you search in the garbage can with Crazy Cat for all sorts of fun things with which to play. Find something good? Whoosh, into the bucket! Who will be the first to fill his bucket in this collection game?
Quote:
Four crazy cats are taking part in a wild race in Crazy Cat: Geheime Mission, but who's hiding where? And which two crazy cats will reach the finish line first?
Quote:
Crazy Cat: Verrückte Welt is a colorful memory game set in the world of Crazy Cat. In the game, players help Crazy Cat and her boyfriend Funny Dog find items in the desired category.
Quote:
Everything has gone crazy in the sewers! Who will be the first feline in Crazy Cat: Wilde Jagd to follow the cheeky mice to the big cheese?