• Another day, another round-up of what's coming from a German publisher in the first half of 2014, with ABACUSSPIELE being the publisher in the spotlight this time around. Since the middle of 2013, ABACUS has been swamped (in a good way) with all things Hanabi, that game having won Germany's Spiel des Jahres award, but that doesn't mean the publisher won't have new offerings to show off at the Nürnberg toy and game fair at the end of January 2014.

The highlight of ABACUS's offerings is Han, a new take on the Web of Power/China game system from designer Michael Schacht. In its press material, ABACUS notes that the game is meant to celebrate both the 25th anniversary of the company and Schacht's 25 years as a game designer. Whatever the cause, I'm happy to see more versions of this ingenious system. Ideally at some point ABACUS would release a boxed set of all of the China expansions that Schacht created for his online gaming site. In any case, here's an explanation of Han that covers everything for newcomers to the system, while including details of what's unique to this package:

Quote:
In Han, players use cards to place pieces (houses or emissaries) into the nine regions on the board. To place in a region, a player must play a card of that region's color or two cards of the same color as a joker; a player can place at most two pieces in a region on a turn, but only one piece if the region was unoccupied at the start of the turn. One side of the game board — titled "Grenzstreitigkeiten", or "Border Disputes", and made for 3-5 players — includes house sites that straddle two regions; to claim one of these locations, a player must discard two appropriately-colored cards. The number of emissaries in a region is limited to the number of houses of the same color in that same region.

"Grenzstreitigkeiten" has one variant. Each player starts with one fortification in addition to his other pieces. Once per game, a player can play two matching cards, then place his fortification on a house site, then top it with a house. Whenever this house scores — whether for the region majority, for being a port city, or for being part of a sequence — the house's owner scores double the points he normally would.

The other side of the game board — "Wege der Diplomatie", or "Ways of Diplomacy", which is made for 2-4 players — also has a variant, with each player receiving a marketplace. Once per game, a player can play two matching cards, then place the marketplace on a house site, then top it with an emissary (not a house). This allows a player to compete for emissary points in a region that is otherwise full. 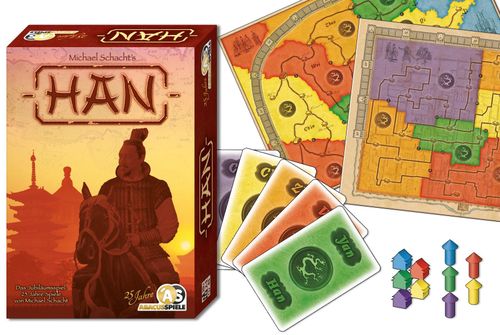 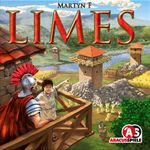 • Limes is a new version of Martyn F's Cities, which he first released through his own Emma Games in 2008. For this new version, the setting has moved to the Roman era, and the game itself has a few changes. An overview with some detail:

Quote:
Two thousand years ago on the borders of the Roman Empire, life goes on as might be expected — but barbarians lurk across the border, so not only must the players grow grain in the fields, catch fish, and chop wood, but they must also maintain watchmen in a clever network of watchtowers to keep a lookout for fires and barbarian attacks.

Limes is based on the designer's board game Cities, and while the game system is roughly the same, the scoring is completely different. In addition, the tiles in Limes have a different layout from those in Cities. Together they ensure that Limes has become an entirely new game.

Limes includes two sets of cards, one for each player, but if you combine copies of the game (and use uniquely marked figures), any number of people can play at the same time.
To satisfy my own curiosity, I had to research the connection between limes and Romans. Was there a particularly satisfying beverage they drank? Were limes a secondary form of currency? As it turns out, the name doesn't refer to the fruit. From Wikipedia:

Quote:
A limes was a border defense or delimiting system of Ancient Rome. It marked the boundaries of the Roman Empire.

The Latin noun limes had a number of different meanings: a path or balk delimiting fields, a boundary line or marker, any road or path, any channel, such as a stream channel, or any distinction or difference. In Latin, the plural form of limes is limites.
Interesting stuff on that page, including a comment on how Roman soldiers would sometimes violate the limes after what was essentially teasing by Germanic raiders. (And I wonder sometimes why these posts take so long to write. Focus, Eric, focus!) 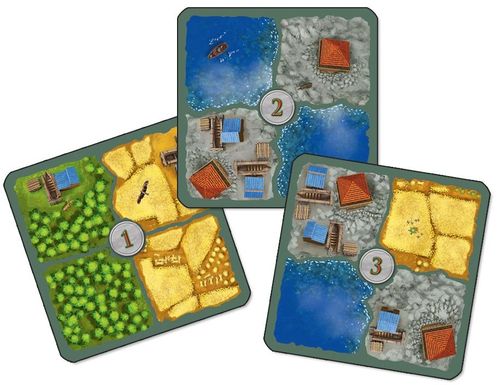 • The third title from ABACUS in the first half of 2014 is the quick-playing card game Oink! from designer Inon Kohn, who has also created a fair number of logic puzzles along the lines of Rush Hour. (Someday — PuzzleGeek!) Here's an overview of the game from the publisher, along with my guess as to what's really going on based on the back of the box:

Quote:
Oink! challenges players to make lightning-fast strikes when two similar animals appear on the table — but in addition to striking the table, they need to make the proper animal noise faster than anyone else, and whoever does so claims all of the available cards. Watch out, though, as the naughty pig imposes itself again and again between other animals with a loud "Oink!"
In more detail (although, again, just my speculation), the ninety cards are dealt out evenly to all of the players, who then takes turns adding one card to a central pot, with each previous card being visible when you add the next one. Should an animal be added to the pile while it's already the top card, players race to strike the table while woofing, baaing or otherwise making sound. Should the top two cards sum to 7, however, players must strike the table and oink at the same time.

Should this description be accurate, it seems ideal for when you're meeting new people as you'll learn right away who's game for anything!

Updated, Jan. 21: Turns out that I was mostly right, except that (1) Oink! includes pig cards that require you to "oink" no matter what the previous top card was and (2) cards are stacked on top of one another, not placed askew, so you're challenged to remember which animal and number was previously on top once the new card is placed. So close to being correct! That's the magic power of ABACUS' 1-2-3 explanation system that it adopted a few years ago. It does the job well! 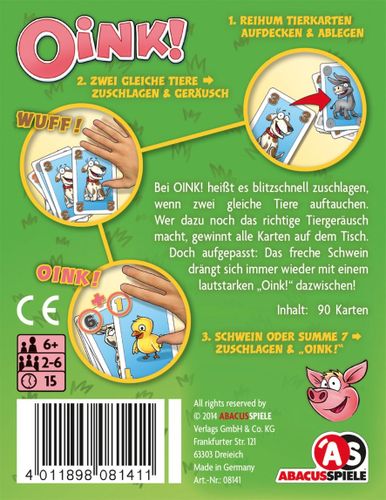