New Game Round-up: HUCH! & friends - Kamisado Large and Small, Take Commands from an Oracle, Roll Your Dung into a Ball, & The Burj Khalifa Is How Tall? 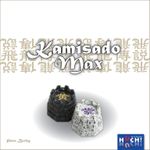 • Peter Burley's Kamisado, first published through his own Burley Games in 2008, is a delightful abstract strategy game, one of those in which the rules are almost invisible because you can explain them in under one minute and hop right into playing. In case you're not familiar with the game:

Quote:
The aim in each round is to be the first to get an octagonal "dragon tower" to the opposite side of the board; towers move in straight lines, either forwards or diagonally forwards. The twist is that you must move the tower of the color matching the space on which the opponent moved on her previous turn. As the game progresses, you'll find that the routes you want to use are blocked by enemy towers — and sometimes your own! If you can't move, your opponent moves again immediately, moving the tower matching the color of the space occupied by the stymied tower.
You can play only a single round or you can play a series of rounds, with the winning piece in a round being promoted to a higher rank and gaining the power to push opposing pieces instead of being blocked. In addition, in subsequent rounds you line up the pieces on the back row based on their position at the end of the previous game, thereby forcing you to rethink your openings and attacks constantly.

German publisher HUCH! & friends has been publishing versions of Kamisado since 2009, and for 2014 it plans to release both Kamisado Pocket and Kamisado Max. Kamisado Pocket is the original game, but with flat pieces so that the whole thing fits into a thinner space. Kamisado Max, however, expands on the original game, with ten colors of pieces (instead of eight in the original game), a 10x10 game board (instead of 8x8), and new movement rules. What are those rules? Ideally I'll find out at the Nürnberg toy and game fair that opens at the end of January 2014, then I can let you know. 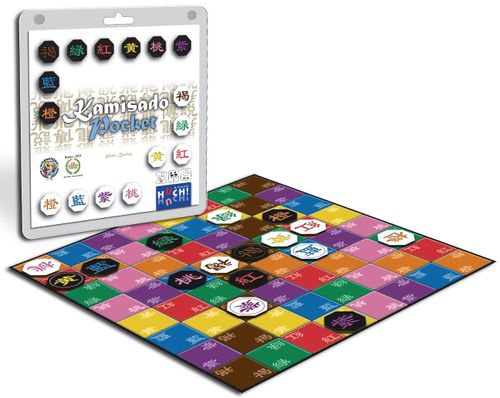 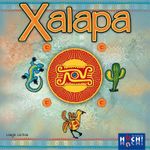 • Turns out that designer Lauge Luchau has two new games due out in 2014: Dimension from Kosmos, previously covered in this BGGN post, and Xalapa from HUCH. As with his first design, Uluru, both games seem to have players placing pieces in certain arrangements based on criteria set by the game system and random elements. Here's all I know about Xalapa, for example:

Quote:
In Xalapa, the mystical oracle reveals the criteria that have to be met for each challenge. Once those criteria been settled, all the players immediately try to find the right spaces on their boards as fast as they can. The quickest player who doesn't fall into disfavor with the oracle can win the game after seven rounds.
Obviously you and I need details before we'd know whether this is the ideal "place pieces in certain arrangements based on criteria set by the game system and random elements" design for us — assuming you like these types of games, that is. 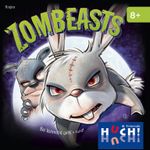 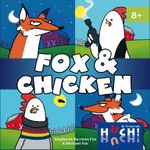 • What else is coming from HUCH! & friends from now through September 2014? Kinjiro's Zombeasts comes in the same footprint as the quick-playing card games Nox and Voodoo Mania, so I expect something similar there, with players trying to nab valuable animal zombies.

• Voll Schaf is the German version of Francesco Rotta's Battle Sheep (coming from Blue Orange in the U.S. and elsewhere in Europe), and this game is 2-4 player version of Rotta's Splits, a fantastically simple game that gives Kamisado a run for its money in that department. You want to be the last player to place a piece on the game board. With each move, you split one of your stacks of tokens and move part of the stack in a straight line until it hits the edge of the board or an obstacle. Block everyone else, while leaving yourself room to move — that's all you need to know.

• To continue in the animal kingdom, HUCH is releasing a multilingual version of Fox & Chicken, a farmyard take on Werewolf first released by designer Michael Fox's Sprocket Games.

• Terra is a derivation of Friedemann Friese's Fauna, but with players pondering the trivial details of locations rather than animals. Here's an overview of the game:

Quote:
How tall is the Burj Khalifa? How deep is Lake Baikal? When was the Tower Bridge first opened? In Terra, players are taken on a trip around the globe, visiting all the world's most famous sights, up to the highest mountain tops, onto the smallest islands, and into the depths of the deepest seas. From the equator to the Earth's poles, there's lots to discover! Who knows how long the Amazon River really is? Or where the world's steepest street is? Even if you don't know with certainty, you still have a good chance to become the world's greatest explorer. Points are also awarded if you come close.
Fauna originated with HUCH in 2008, then went out to be released in multiple languages by other publishers, so perhaps Terra will follow a similar publication path. 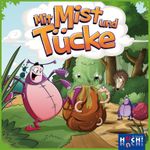 • Mit Mist und Tücke from designer Helmut Ast (wink wink) will be the latest dung-themed game to appear on retail shelves, but given my son's fascination with joking about anything butt-related, I can understand publishers aiming games at this market of young jokesters. An overview:

Quote:
The dung beetles are gathering food for their baby beetles. Methodically, they roll their dung across the wood and up the hill. Absolutely exhausting! Luckily the dear little critters are waiting on the other side of the valley. All it takes is a little shove, and the dung begins to roll all by itself down the hill to the caves. But who's hiding among the bushes? That up-to-no-good hedgehog is looking to interfere! He rolls himself into a ball and races down the hill. Soon, all the dung is rolling in all different directions.

Who will be the first to gather all his dung safely home in Mit Mist und Tücke, filling the caves with food?

• HUCH has several more items due out in 2014 — and you can check them out and many other forthcoming releases on BGG's Nürnberg/NY 2014 Preview — but for now I'll close with Andrea Mainini's Azteka, mainly because I want to show off the creepy pieces included in the game:

Quote:
Life and Death are in a constant struggle to gain the upper hand in the cycle of life. In each round of Azteka, the two combatants place a piece or spin the wheel of destiny. Each side does its best to reach opposing goals: Life tries to expand into all areas, while Death is content to rule either a single area or the ring of the cycle of life. In a three-player game, mummies are out to play a trick on both Life and Death. Who will come out on top?