It's award season! The Oscars, the Golden Globes, the Emmys, the Super Bowl, and most importantly the Golden Geeks! I am particularly partial to a certain title in the card game category, but otherwise I found it interesting that not a ton of Kickstarted games made the cut. I think that will change as more and more big companies use crowdfunding to generate funds (and preorders) alongside the smaller guys. I have had an extra busy month backing stuff after a decent hiatus, so I should get some cool packages...in 6-18 months!

• Tasty Minstrel Games has launched a KS project for Scoville by first-time designer and neat-o guy Ed Marriott, who runs the very good blog Boards & Barley. I know — TMG has a KS going? Crazy! Head boss Michael Mendes mentioned that after Scoville and another "pay what you want" microgame — the recently funded This Town Ain't Big Enough for the 2-4 Of Us from the Bamboozle Brothers (that's what they decided to go with; that's not me making fun of them and since they seem like cool guys I am going to make no further comments on it) — TMG is going to take a break from KS and manage the current slew of games in development and production. All that said, Scoville indeed looks very cool. I was an early backer as I love games with a spatial element and patterning, and the pepper theme is fun as well. (KS link)

Quote:
The town of Scoville likes it hot! Very hot! That means they love their peppers – but they're too busy eating them to grow the peppers themselves. That's where you come in.

You've been hired by the town of Scoville to meet their need for heat. Your role as an employee of Scoville is to crossbreed peppers to create the hottest new breeds. You'll have to manage the auctioning, planting, and harvesting of peppers, then you'll be able to help the town by fulfilling their orders and creating new pepper breeds. Help make the town of Scoville a booming success! Let's get planting!

A round of Scoville consists of a blind auction, which determines player order, a planting phase, a harvesting phase, and a fulfillment phase. Each round, the players plant peppers in the fields. Throughout the game, the available opportunities for crossbreeding increase as more peppers are planted. When harvesting, players move their pawn through the fields, and whenever they move between two planted fields, they harvest peppers. If, for example, they harvest between fields of red and yellow peppers, they crossbreed those and harvest an orange pepper. Harvested peppers are then used to fulfill the town's peppery desires!
I don't love the cover, but everything else looks top notch. 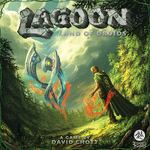 • Designer David Chott and his company Three Hares Games is using KS to fund Lagoon: Land of Druids. Thanks to the magic that is Unpub, I have actually played Lagoon and was very impressed. It feels unique, and it is one of those games you think about for awhile after you play it. I played 2p and watched 3p, and both work very well. Four-player is team play; I'm not exactly sure how that would go, but it is worth exploring as the game is worth the effort and I have heard it works well. If you have been paying attention to the image hotness over the last week or so, you have seen the incredible art that the Lagoon tiles feature. It is really, really good.

Thematically, you are druids or some crap about spirit energy... I don't know. David was really cool and explained it, but I kinda zoned out. Basically there is red, yellow or blue, and it uses a paper-rock-scissors mechanism that is really fun and the game is great. ( KS Link)

Quote:
Lagoon: Land of Druids is a game in which 2-4 players each lead a circle of druids to shape the fantastical world of Lagoon by harnessing the power of its magical lands to bend destiny. The landscape bristles with three divine energies. Every player action alters the balance of power among those energies, and thus the players collectively determine Lagoon's destiny. One divine energy shall inherit Lagoon, and the player who best served it wins!

The world is built using hexagonal tiles, and a new tile is drawn from a bag each time a druid explores a site. Site tiles are double-sided, and each side represents a different mystical site offering a unique magical power to the druids. Each site is also enchanted with one of three divine energies: Elemeen, Vowelon and Deonin. Since the two sides of a site tile are always linked to different energies, every site explored presents a choice of which energy to advance over the other two, as well as what magic will be put into the world for use by the druids. Players also strategically deploy their druids to unravel sites aligned with an energy they choose to oppose, removing such sites from the world and tipping the balance of power towards the other two energies.

The energy with the most sites in play at the end of the game becomes Lagoon's destiny, and the player who most supported that dominant energy is the winner. Support is tracked in two ways. First, whenever exploring a site and expanding an energy's reach in Lagoon, the exploring player gains a divine seed token matching the explored site's energy. These seeds can be spent in various ways over the course of the game, but any seeds of the dominant energy remaining in a player's supply at the end of the game are worth 1 point each. Secondly, whenever a player unravels a site, it is removed from play and placed in front of that player. At the end of the game, unraveled sites not matching the dominant energy are worth 2 points each.
REALLY pretty. Some of my favorite art of the year so far.

I kid, I kid. Robert is a fine designer in his own right. He is no Launius, but who of us is? (KS Link)

Quote:
Draco Magi is a card game designed by Richard Launius and Robert Burke. To start, each player selects an apprentice dragon mage he wishes to play. Each mage receives a deck of dragon cards that includes multiple copies of four different chromatic dragons (Green, Red, Black & Purple), four different metallic dragons (Gold, Silver, Brass & Bronze), and two special dragon cards (the Battle dragon and the Polar dragon). Each dragon has a different strength, weakness and special ability. Players will send their dragons, one at a time, to capture gems on different battlefields; each battlefield offers a different effect that may give an advantage or disadvantage to certain types of dragons.

After all dragon cards have been played, the melee phase of the battle begins. Each dragon has a "melee attack" value printed on its card which represents the number of battle cards the player can draw for the battle. The melee battle mechanism is a unique attack and counter system that provides opportunity for deduction, subtlety, and deadly combos. Players will also earn advance battle cards that build up their decks over the course of the game. The player with the most dragons present on a battlefield wins that gem. In the case of a tie, the dragons and gem remain for the next round.

Draco Magi is a fast game heavily connected to its theme that incorporates area control, bluffing, hand management, deck building and deduction.
'Bout time Launius was back on Kickstarter!

• Now for something a bit different. Well, a LOT different. Query from designers Nikki Flowerday and Phoebe Stephens is a party game based on Internet searches. (KS link) When I was made aware of this game, I was immediately humored. Who among us hasn't giggled at the insane stuff Google (or whatever your preferred search engine is, such as AOL, AskJeeves, AltaVista, or HotBot) autofills when you are typing "How can I increase the length of my...arms" and such. A good example of how the game works is shown at right.

Quote:
In Query, each card has a Query beginning and four real Query endings. The dealer reads the Query beginning aloud and players come up with their own endings, write them down on whiteboards, and submit them to the dealer.

Meanwhile the dealer chooses a real Query ending that he thinks nobody will guess from the card and writes it down on a whiteboard. The dealer reads all the endings aloud, including the one he chose. Players then take turns guessing which is the real ending.
You are going to have to institute a smart phone stack to stop cheating. 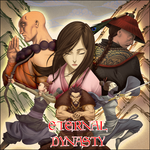 • Second timers and worst company name of the month winners Zucchini People Games have funded Eternal Dynasty and are looking to knock off some stretch goals. (KS link) I have been told I am a little hard on company names. I do not mean to be and I won't claim I could do any better, so I apologize to the guys from ZPG. The good news is that Eternal Dynasty DOES look pretty cool, and the art is well done. It is a heavier, meatier game which is cool to see.

Quote:
Eternal Dynasty is designed for 2-5 players and generally takes 60-150 minutes to complete (20-30 minutes per player). Each game will run for a number of Generations (Rounds of Play) equal to the number of players. At the beginning of each Generation, players will select a Ruler who will have different inherent bonuses for Military or Political Influence, a specific number of cards to play for their Generation, and a unique Ability. Players take on the role of feuding clans and will fight over control of the 18 provinces of ancient China. As the Generations progress, players will be able to adjust their strategies on the fly or continue reinforcing their current strategies as they change to a new Ruler.
Is saying "Eternal Dynasty" like saying "Orangey Orange"? Either way, it looks cool.

• Alchemy! The card game! Make potions, unleash chaos! Use up surplus exclamation points! It has funded and is working toward more swag. (KS link)

• Flip! is a new take on rummy and is looking for more backers. (KS link)

• 5th Street Games is back with Mob Town. "Towns are yours for the taking in Mob Town! The local rats, sharks, foxes, snakes, and weasels will help you get a piece of the action!" (KS link)

Thanks to its mention is this very write-up and for NO other reason, Tiny Epic Kingdoms nearly eclipsed the 300K mark! 8,900 BACKERS!!!! (KS link) That is a bigger print run than most games ever see and further proof that I have NO IDEA what KS backers are looking for. That is not a shot at TEK; I backed it and it looks very cool but 8K+ backers! NO ONE saw that coming. I am not completely sure what attracted people's attention to this project in droves, but congrats to Michael Coe and Scott Almes. The success is well deserved.

See you in a month, and remember that if you have any questions, shoot me a geekmail or post it in here. Complaints and/or rants can be directed at W. Eric. It was likely his fault anyway.