• U.S. publisher Alderac Entertainment Group has added another Japanese designer to its "Big in Japan" line: Kuro, who seems to release a handful of games at each Game Market under the name Manifest Destiny. Here's a rundown of the card game Seventh Hero, due out in July 2014:

Quote:
The card deck in Seventh Hero consists of 77 cards, with each card representing one of seven different heroes. Players each start with two random heroes, and each hero has a special power that can be activated once. Each turn, a player sends a card from his hand face down to the next player, who can choose to take it or pass it on. If he takes it, he adds it to his group of heroes, but if it's a hero he already has, both hero cards are sent to the discard pile. Before sending a hero away, the player must obey the current round's limitations, such as the card must be odd or must be below or above a certain number.

The first player to collect six of the seven heroes wins. 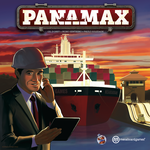 • U.S. publisher Stronghold Games has signed on as co-publisher of Panamax from the design team of Gil d'Orey, Nuno Sentieiro and Paulo Soledade and originating Portuguese publisher MESAboardgames. A summary of the gameplay:

Quote:
Panamax is a game with an original dice (action) selection mechanism. On their turn, players remove a die from the movement or load area and try to perform the better actions. Timing is crucial as when to move, grab the better contract, sell the highest profitable bond or hire the right character is very important to make the most profit out of your actions. Money is the goal of the game as it is, in a modern final analysis the main purpose of the existence of the Canal itself.

In the game, players are companies established in the Free Zone of Colon and they will try to find a way to negotiate contracts in order to use the ships that are arriving in both parts of the Canal. Ships are coming from both U.S. coasts, China and Europe, and they represent an opportunity of making money. If one can deliver containers into a ship, this ship should traverse the Channel in the most possible efficient way. Players have ways to get the locks opened and closed, get better contracts, invest in the stock market and hire the best characters to help them.

Panamax is an economic game, with simple rules and a very interactive way of making movement through the Canal, ship and deliver goods for profits. A volatile market in which players can make investments is also present and a competition for the best ship and the best way to make money.
This game has been in the works since at least 2012, and 2014 is pretty much the deadline for this game's publication given that the Panama Canal opened on August 15, 1914, making this game a centennial anniversary item that could pick up a bit of buzz in the mainstream should it not be too complex. While scheduled for release at Spiel 2014 in October, Stephen Buonocore from Stronghold says that he might have advance copies for demo or purchase at Gen Con 2014, which (coincidentally?) runs August 14-17. for more about the game, here's an overview recorded by the BGG crew at Spiel 2013:

• The Fleet team of Ben Pinchback and Matt Riddle has a new title coming from Gryphon Games: Eggs and Empires, which will head to Kickstarter in April 2014 as is the case with everything from Gryphon. An overview of the gameplay:

Quote:
In the fast-playing card game Eggs and Empires, players use matching decks of empire cards that contain adventurers numbered 1-10. Starting with a hand of three empire cards, each turn all players select one card from their hand, then play them simultaneously in an attempt to collect egg cards. Typically, the player who played the highest empire card chooses an egg first, then the player with the second highest empire card, and so on until all revealed eggs are collected, if possible. However, each empire card has a unique power that can affect the order in which eggs are selected. The powers interact in strategic and awesome ways so that every hand is exciting and fun!

Outwit your opponents to collect as many good eggs as possible — that is, ones worth victory points (VPs) — while avoiding those nasty exploding eggs! Whoever collects the most VPs over three rounds wins.
Special powers! Blind bidding! Eggs! So many things to love or hate depending on your tastes...

• While waiting for 404: Law Not Found to make its way through production through production and into the hands of KS backers, designer Gregory Carslaw of 3DTotal Games has been working on a new design titled Wizard's Academy, which takes the standard "wizard apprentices learning spells and mucking things up" and presents it in what he hopes is a new way. A summary of the setting and gameplay:

Quote:
On entering the wizard's academy, the new apprentices swore a solemn vow to learn the ways of magic, protect the institution, and uphold its values. Unfortunately most of them have failed to learn any significant magic in their first year. Susie coasts by on her natural talents, Malkar would sooner sell his soul for power than read a book, Nyvetta has forgone that option along with opposable thumbs upon accidentally turning herself into a bear, Flitter is only here to steal magic items to sell on the black market, and Bramblethrone spends too long talking to trees to get anything done. As a group of students, they could not be worse.

Wizard's Academy is a co-operative game of magical experimentation for 2-5 players. In each game, the players select a scenario, such as summoning and binding a demon to steal its powers, defending the academy against an attack by an army of Imps, or (in the most difficult scenario) facing an academy inspector whom they must impress with their mastery of magic.

Players move around the academy collecting glyphs in order to cast spells. At first, the effects of the spells are unknown, but as the players try new things, the students gain the power to manipulate the academy, the creatures within it, and the fates themselves – ideally achieving their goals before the monsters and elements that they've accidentally summoned reduce the building to smoking rubble.
More details of gameplay, along with images of the prototype that shows off how players learn (and then forget) spells on the 3DTotal Games website.