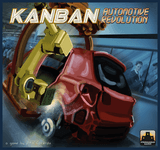 • U.S. publisher Stronghold Games has announced that it will publisher Vital Lacerda's Kanban: Automotive Revolution, which has been in development since at least 2010. (Stronghold co-published Lacerda's CO₂ in 2012.) Here's a long description of the game and its inspiration:

Quote:
Kanban — or 看板, the Japanese word for billboard — is a term for the visual cues that might be used in a lean, efficient assembly line in order to expedite and smooth workflow. These signals get the workers what they need, where they need it, when they need it to create a just-in-time (JIT) production system.

The setting for the game Kanban: Automotive Revolution is an assembly line. The players are ambitious managers who are trying to impress the board of directors in order to achieve as high a position as possible in the company and secure their careers. With promotions come advantages at the factory, such as more space to store precious materials and greater prestige to accelerate your ascent. Through solid management, you must strive to shine next to your peers. You need to manage suppliers and supplies, improve automobile parts, innovate — anything to stay on the cutting edge, even if it means bribing the factory tender to get you advantages or getting your hands greasy on the assembly line in order to boost production. You must exercise wisdom in choosing which projects you should start, selecting only those that will give you the upper hand and shunning those that will bog you down or cause the unthinkable — failure — which would diminish you in the eyes of the board.

Over the course of the game, you submit orders to suppliers to acquire raw materials necessary for factory objectives. You persuade the board and the factory tender to help you develop and improve automobile parts. You make shrewd use of the recycling facilities and the limited factory supplies in order to appropriate raw materials when the suppliers come up short. Because the factory must run at optimum efficiency, production doesn't wait for you or for mistakes.

Like the process itself, Kanban: Automotive Revolution proves to be both innovative and rewarding. Game mechanisms tightly tied to the automobile manufacturing theme include:

• The factory manager is a game-driven non-player character with two modes of play — "nice" or "mean" — to offer a friendly or more competitive gameplay environment.
• Two independent player-influenced game timers — the factory production cycle and work week clock — provide timing tension to the game, trigger intermediate scoring phases, and factor into the game end conditions.
• A simulation of the factory assembly line with spatial point-to-point movement adds an element to the game that requires optimal timing.
• A design and innovation department, leveraged to manipulate the value of the various car models and component upgrades produced within the factory, drives the economy of the game.
• Departmental training and certification tracks provide players a means to operate more efficiently.

If you want a seat on the board someday, you need to show that you can keep a complex machine running smoothly, efficiently, with everything happening just at the right time. Kanban is a pure Eurogame focused on economics and resource management that puts you in the driver's seat of an entire production facility, racing for the highest level of promotion.
Stronghold's Stephen Buonocore notes that the game is scheduled to premiere at Spiel 2014 in October, but copies of the game might be available for demo or purchase during Gen Con 2014 in August.

• At the GAMA Trade Show taking place March 17-21, 2014, Italian publisher Ares Games will be showing off two upcoming releases, the first of which is The Battle of Five Armies, which brings War of the Ring designers Roberto Di Meglio, Marco Maggi and Francesco Nepitello back to the world of J.R.R. Tolkien. I thought I had included this game in a previous BGGN post, but apparently not, so let's go to the game summary:

Quote:
The Battle of Five Armies – based on the climax of JRR Tolkien's novel The Hobbit – pits the hosts of the Elvenking, the Dwarves of Dain Ironfoot, and the Men of the Lake led by Bard the Bowman against a horde of Wolves, Goblins and Bats led by Bolg, son of Azog. Will Gandalf turn the tide for the Free Peoples? Will the Eagles arrive, or Beorn come to the rescue? Or will Bilbo the Hobbit perish in a last stand on Ravenhill?

The Battle of Five Armies features a game board representing the Eastern and Southern spurs of the Lonely Mountain and the valley they encircle, and a number of plastic figures representing troops, heroes and monsters.

The Battle of Five Armies is a standalone game based on the rules for War of the Ring, but with the rules modified to function on a tactical level as they describe a smaller battle rather than the entire war. Ares Games plans to expand the Battles game system in the future, releasing expansions depicting other battles from the Third Age of Middle-earth narrated in The Lord of the Rings, such as the Siege of Gondor and the assault of Saruman against Rohan.
I'm not in Vegas for GTS, so I have no further details to add except that the most recent release date I've seen is "summer", i.e., Q3 2014.

• The other title, also due out Q3 2014, is Dino Race from Roberto Grasso, the short description of which is this:

Quote:
Trying to save their dinosaurs from extinction, players in Dino Race run as quickly as possible through plains, deserts, swamps and jungles while avoiding the nasty tricks of the opponents. Each player must bring his dinosaur couple to the end of the race track, scoring points when one of his dinos­ finishes the race. Players also score points by bringing the dino egg to safety.
For a longer description and a look at the graphics, here's a preview that I recorded during Spiel 2013 with Grasso and Ares Games' Roberto Di Meglio: 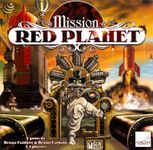 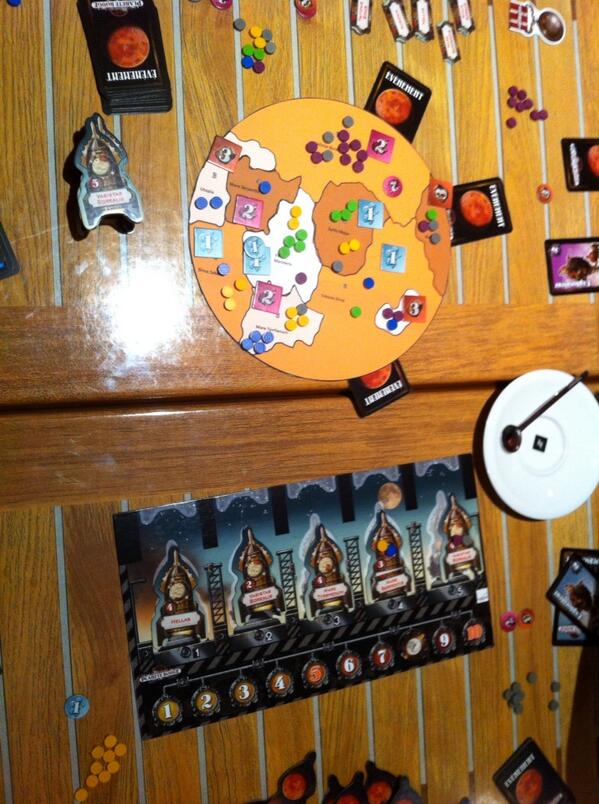 And his fellow designer Bruno Faidutti posted the following on Facebook on March 16, 2014:

As people who have commented on those images have suspected, Cathala and Faidutti's Mission: Red Planet is returning to print in a new edition, and as Cathala himself revealed in a video podcast for "Something from Nothing", the publisher handling that new edition is Fantasy Flight Games. He notes that this version has been changed from the original, but offers no details. Changes shouldn't be a surprise, though, because as Faidutti has catalogued on his blog, the game went through many, many changes during its development: "After months and months of testing different versions of the game, after starting it all over again a few times, we ended with version 7.7 – the one that was published by Asmodée."

Adds Cathala in the podcast, "I just hope that FFG will not be angry for that [revelation]". Me too, Bruno!