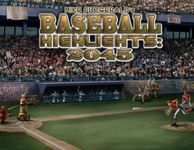 Now that I'm a full-time game designer, I am able to spend more time developing games that I have always wanted to do. I have been a baseball fan since my dad took me to games at Yankee Stadium when I was a kid. I have been looking for a fun game that gives me a feel of baseball in a good competitive game. I like the solitaire simulation games like APBA Pro Baseball and Strat-O-Matic Baseball and have played in leagues for both of these games. They simulate a full game and use the actual statistics of baseball players. However, I have been disappointed overall with attempts at hobby games with baseball as a theme. They are either too simple for my taste — this includes my own Charlie Brown Plays Baseball) — or too boring as they simulate each "at bat" of a game.

Once I knew I wanted to design a game with a baseball feel but not an actual simulation, I was off and running with this design. My first step was using the deck-builder mechanism to form the teams. After a set number of buy rounds, I had all players expose their player cards to add up how many runs their players provided. Each player would then compare with each other player to get their own won and lost record for that round. I had the players complete three or four buy rounds, then had another game resolution with each player simply showing their hand of ballplayers. My playtest group did like this, but I thought it was much too similar to other deck builders in the lack of real player interaction.

I was interested in doing a game in which the attention of the players is on the game state and not just their little section of it. I added a back-and-forth element so that when players compared hands with one another, certain card effects would "strike out" a player card to change the outcome of their total run production. This was better, but still did not have enough "baseball" feel for me. The runs were simply coming from a number on the player cards.

As part of my design process, I like to brainstorm out of the box ideas. Most of them don't work, but sometimes they can lead to something good. I got the crazy idea of each player having a baseball field in front of him and advancing runners around the bases. The action would happen on both fields at once. I was experimenting with this idea when it hit me: What if a player card could have multiple hits? And what if it could also do something to affect the other player's base situation while it was helping his own? This led me to the unique system you see now in Baseball Highlights: 2045. Each card has an Immediate Action box that happens when the card is played and a Hit box that is threatened and will not happen until the other player's Immediate Action box is resolved. Now a full baseball game could be played with realistic scores in the span of a limited number of card plays by each side. 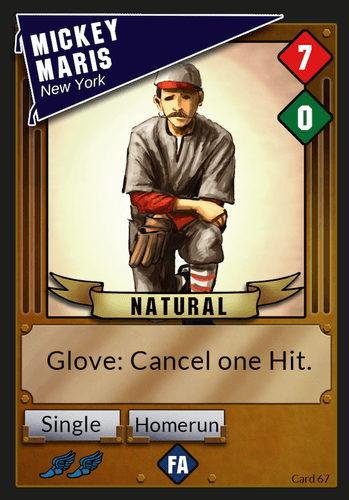 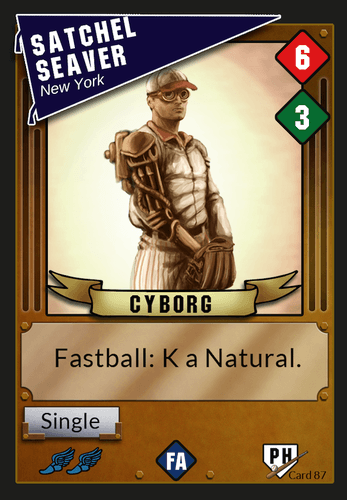 As crazy as this idea sounded to me at first, it turns out that it worked very well. I used my background in designing trading card games to flesh out the different types of players and how the cards would interact. My favorite things in baseball happen in this game, including stolen bases, clutch hitting, home runs, double plays, and other great defensive plays like strikeouts, pinch hitting, and on and on.

Each baseball mini-game now takes only 3-5 minutes to play and uses only six cards per player. In a full match, you now play 7-10 mini-games while acquiring new players for your team between every mini-game.

Players say it feels like baseball and creates a real baseball tension and opportunity for baseball strategy, even though it is not a simulation of an actual game. Even players who do not like baseball per se have found it is a fun tactical and strategic card game.

I am very proud of this design, and I hope you will enjoy playing it as much as I do. In addition to the design itself, I had a great time creating the backstory for this game. The 2045 concept of Robots, Cyborgs and Naturals has given us the opportunity for interesting storylines in the game. My daughter Lauren is a writer and has contributed this short story to help set the scene:

All Tony McGuire wants to do is get home, pop open a nice cold can of ElectroBuzz, and relax in the massage pod. But the roaring mob outside the stadium has other plans for him.

Pushing aside the pain and fatigue, Tony grins for the cameras, shakes the outstretched hands, and signs the baseballs, slowly working his way through the crowd.

"When I grow up, I'm gonna be a Natural just like you!" shouts a little boy, and every kid within earshot calls out, "Me too!"

It takes all the self-control Tony can muster to keep himself from blurting out how nearly impossible it will be for any of these kids to make it as a Natural. Or worse, how in reality, being a Natural often feels just one step above being the team mascot. Just some guy in a costume, dancing around to make the fans happy, while the 'bots and 'borgs play baseball.
"That's great, buddy," he says. "Keep on practicing and you'll get there some day!"

It can't hurt a kid to have a dream, right? Might even help keep him out of trouble. And who knows, maybe someday, when the novelty of all this fancy technology wears off, the game will go natural again. Ha, Tony thinks. Now I'm the one dreaming.

"How's your wrist, Tony?" a fan calls out, and the sweetness of her voice almost disrupts his resolve to keep smiling. He wants to tell her, whoever she is, that at this very moment his wrist is throbbing with excruciating pain. He wants to confide that for a split second there, he almost wasn't going to try to catch that ball because he knew how hard that 'bot had hit it, and he knew how bad it was going to hurt. But he caught it because not catching it would have earned him a one-way ticket to the Minors. With so many Naturals competing to get on teams, Tony is acutely aware of how lucky he is, how easily he could be replaced. There is no room for error or injury — or honesty, for that matter. He finds the face belonging to the sweet voice, and immediately looks away, lest her tender expression bring out more emotion than he cares to reveal. He forces his smile to beam even brighter and gives the crowd an enthusiastic thumbs-up, the gesture itself sending a shock of pain down his forearm.

Ned Lund, a news reporter who has built his career writing about Naturals like Tony, yells out from behind his trademark large black plastic-framed glasses (worn to protest the practice of universal eyesight correction surgery at birth), "Tony! Heard a rumor that you might be switching to the MagnaGlove! Can you confirm or deny?"

"No comment," says Tony, maintaining his smile and continuing to shake any hands in his way.

"Come on, man! You're one of the last true Natties in the game! You can't sell out now!"

Ned Lund's argument is drowned out by the noise of the 'bot cart, a fancy parade-like Float designed to showcase one of the team's robots after each game. Giant speakers blast Lava Core music, flashing red and green lights bounce off the robot's shiny exterior, and Higgins, the scrawny robot caretaker, jogs alongside the cart trying to rev up the crowd.

Tony recognizes Slammer, one of the newest and most powerful 'bots, on display today. Turned on, at the plate, Slammer is an amazing hitting machine, a force to be reckoned with, a feat of modern engineering. Turned off, propped up and posed on the 'bot cart, he is just a hunk of metal, an empty suit of armor, a huge, unwieldy collection of parts that happens to have a poorly designed and slightly horrifying face. Tony's smile twists into a smirk momentarily as he observes the effect of the spectacle on the crowd. Many of the people who had greeted him so enthusiastically now hang back as a smaller, rowdier group emerges, fists pumping. Dressed like Lava Core singers and screaming just as loud, the 'bot fanatics chant Slammer's name over and over as Higgins rattles off technical details about the 'bot's construction in a hoarse falsetto that no one can hear.

Slammer's arrival gives Tony a chance to make his escape. A few lingering fans chant "McGuire's on FIRE!" and Ned Lund hollers one more question, something about the rivalry between Naturals and Cyborgs, but Tony just keeps on walking. He's done enough public relations for one day, he thinks.

Back in the safety of his vehicle, he takes a moment to rub some Blue Freeze on his aching wrist. The relief almost brings tears to his eyes. And there in his duffel bag, he spots the still unopened gift that his coach had given him earlier, to "recognize his significant contributions to the team". He doesn't need to open it to know what it is, but he tears the yellow paper back just enough to confirm his suspicion. The unmistakable MagnaGlove logo stares up at him. The only people with the money and connections to access the MagnaGlove are the baseball big shots, he knows — and when the baseball big shots send you a pretty package claiming to be a token of appreciation, he knows it's not a gift. It's an ultimatum. 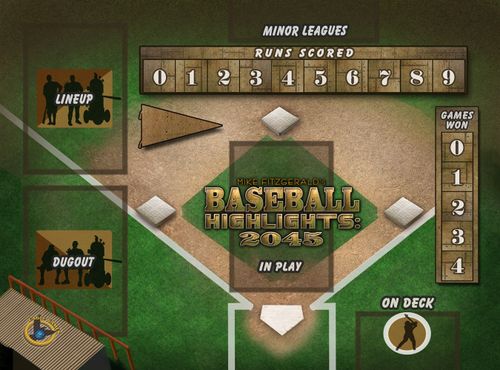 Editor's note: From my demo game with Mike Fitzgerald at BGG.CON 2013, I know that he's overflowing with enthusiasm for both the game itself and the world that he's created for it. To wit, he's been writing profiles of individual ballplayers to fill in their backstory. —WEM