The Hippodice Spieleclub hosts an annual game design competition, and the winning games have a good record of being published in the following years — which shouldn't be surprising given that the jury for the award mostly consists of employees for German game publishers. After all, if they like your game enough to grant it an award, they might like it enough to place their logo on it, too.

Arve D. Fühler's Pagoda, submitted under the name "Die Pagoden von Dra Chen", won a special prize in the 2013 Hippodice competition for best two-player game, and German publisher Pegasus Spiele released it in Europe in March 2014. (AEG plans to release the game in the U.S. in June 2014.)

Funny thing, though, is that the game feels more like a 2004 release, a classic member of the Kosmos two-player game line that's been time-shifted to the present day. The feeling starts with the components: cards in five colors, wooden columns in five colors, pagoda tiles in five colors, with each color of tile having five versions, one for each color — everything is stripped to the basics. Gameplay is equally basic: Players take turns playing cards to place 1-3 columns on the game board, building pagodas together to please the Emperor of China with the game ending once three pagodas are finished. Whoever has the highest score wins. (Head here for a video overview of the game, or read on...)

Each pagoda tile is one of the five colors, and it has colored spaces on it to show which color columns must be placed on top of it. Each color combination occurs once — red tile with purple spots, red tile with red spots, etc. — and once a tile has been used, it can't be used again, so over time your choices for which column color comes next are constricted. You need to keep those choices in mind, in addition to looking over the cards held by your opponent, when deciding what to build where. 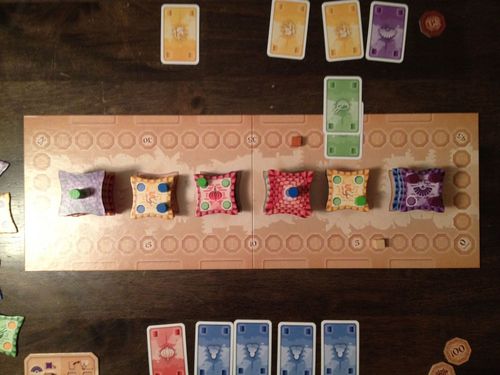 Placing two green columns (and going blind from the glare — sorry!)
A pagoda can be at most four floors tall, with the fourth tile being placed face-down; this reverse side has space for a single rooftop pillar, and to place this pillar (which counts as a single column) you must play two cards of the appropriate color. You must build the roof and pillar on the same turn.

So where do the points come into play? Each column you place is worth 1-5 points, with the points depending on how high it is in a pagoda: a column on the ground (first floor in U.S. terms) is worth 1 point, a column on the second floor is 2 points, and so on up to the rooftop pillar being 5 points. Thus, you don't want to place pagoda tiles, especially the second and third ones, so that your opponent can play on them, but you'll have to do this at some point. Ideally, though, you can profit more from your pagoda tile choices than she can, giving you a greater percentage of the points from those higher columns. 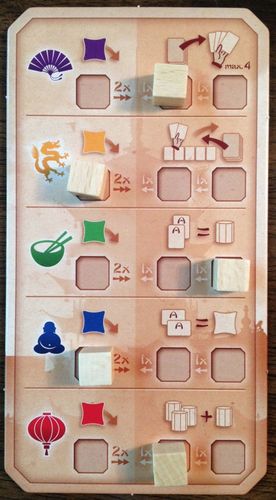 Each pagoda tile is worth 1 point no matter how high it's placed, but these points are secondary to the special power that you bank each time you complete a floor. These special powers are color-coded, of course, and each time you place a tile you move the appropriate marker on your architect board to show that you can now use this power twice. The powers are:

Quote:
• Purple: Refill your hand to four cards (instead of two) at the end of your turn.
• Yellow: At the start of your turn, throw away any number of cards from the table or your hand, then draw that many cards as replacements.
• Green: Play a matching pair of cards to place a column of any color (following the normal rules for column placement).
• Blue: Play a matching pair of cards to place a pagoda tile of any color (following the normal rules for tile placement).
• Red: Place a fourth column on your turn (following the normal rules for column placement).
You can use powers as soon as you gain them, with a limit of one use per power per turn. These powers grant you flexibility, allowing you to (possibly) turn garbage cards into something usable or to do something your opponent didn't expect you to do, and in some sense Pagoda comes down to you reading your opponent's hand and trying not to let her place tiles as they allow her to control which columns can be placed on top of the tile — thus giving her the upper hand on scoring points — and grant her special powers with which she'll further dominate you. I've played seven times with a review copy from Pegasus, and in one game I was rolled by my opponent, with him placing nearly every tile in the game and me staring at my cards and doing almost nothing. (As a last resort, you can choose to discard any four cards to place a single column on the board, but then your turn ends. This rule gives you an out if you're stuck with cards that can't be played due to the current column color options and a lack of special powers, but you never want to go this route if possible.)

Although Pagoda has that classic Eurogame simplicity, the games themselves have played out differently, partly due to my opponent's playing styles and partly due to me becoming better at the game. In the middle of my most recent game, for example, I used a lone card to place a purple column on the last empty lot, scoring only a single point for the move but blocking that lot and disallowing my opponent from dumping his four yellow cards on that space, which then led to a desperation flush of those unusable cards on his turn, after which I immediately completed a floor that made yellow the next column color in that pagoda.

Using the purple special power seems like an auto-choice — why wouldn't you want four cards in hand, if possible? — but deciding when to use the other powers takes more experience. You don't want to throw away the chance to use a joker or place a fourth column just to grab a few points, but rather to help control the pace of the game by getting you those tiles, which let you control color (sort of), which lets you control (sort of) who's scoring for columns.

As with all card games, you're somewhat at the mercy of what you draw, but given four of the five special powers and the desperation flush, you're not as helpless as you might think — and sometimes you get stuck with a color only because you weren't thinking ahead and planning what to do on the subsequent turn. After all, your goal isn't to score as many points as you can each turn, but rather to end up with more points than your opponent whenever the game does end — and if you dump all your cards in a single go, then you risk having a hand of unplayables on the subsequent turn once you refill to seven. Sometimes those moves are worth going all out, but it all depends on what you see in front of your opponent, what powers are available to you, and what color options exist on the board. Control and flow — that's what you'll find at the heart of Pagoda.

Quote:
"When it is obvious that the goals cannot be reached, don't adjust the goals, adjust the action steps." — Confucius 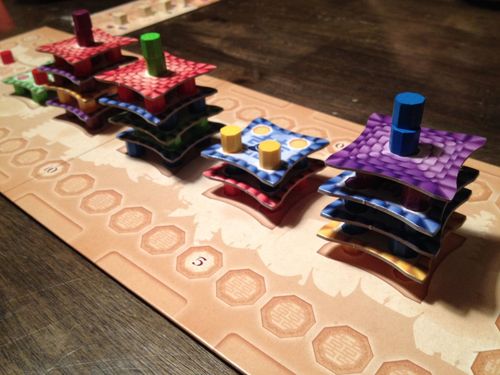