• Steve Jackson Games continues to advance toward a full reboot of its Car Wars combat game of vehicular mayhem with the announced October 2014 release of the Car Wars base set, which SJG describes as "the original version of the game". A game summary for those unfamiliar with this 1981 release:

Quote:
Drive offensively! Car Wars is a game featuring freeways of the future in which the right of way goes to those with the biggest guns. Players choose their vehicle — complete with weapons, armor, power plants, suspension, and even body style — then they take them out on the road, either to come home as "aces", or to crash and burn. If a driver survives, his abilities improve and he can earn money to buy bigger and better cars. Advanced rules let players design their own customized cars, trucks, and cycles.
• Another reboot coming from SJG in October 2014 is a new edition of Jason Wittman's Tile Chess, first released in 1999. In this game for 2-6 players, each player's pieces are represented by tiles and you don't use the traditional 8x8 game board. Instead the playing area is formed from the pieces themselves, which move and capture in their traditional ways. Players add pieces to the game board turn by turn, and the pieces must always remain connected after each move.

With the return of Knightmare Chess in September 2014 and this game in October, can Proteus be far behind? (Answer: Yes, it could be. We'll see what comes in the months ahead.)

• Also in the offing for October 2014 from SJG is Philip duBarry's Revolution! Anarchy, an expansion for his board game Revolution! that allows for play with up to six players. A short description:

Quote:
The legitimate authorities have given way to mob rule — it's anarchy!

Revolution! Anarchy includes a new board overlay, new bidding boards, and two new sets of player components, allowing you to play Revolution! with up to six people. With this expansion, you'll be able to force the Warden to throw your enemies in jail, blackmail the Heretic and take over the asylum, and bribe the Anarchist, whose effects change every turn!
The funny thing is that the first Revolution! expansion from 2010, The Palace, also allows for play with up to six players, so I'm guessing that they can be used separately or together with the base game, but I've submitted an info request to SJG HQ and we'll see what they say. Update, June 10, 2014: Brian Engard from SJG says that either Anarchy or The Palace can be used with the Revolution! base game, but not both at the same time. 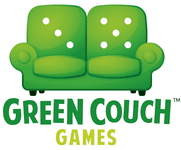 • Designer Jason Kotarski is starting his own publishing house, Green Couch Games, with the release of Fidelitas, a design from him and Philip duBarry — yes, him again! — due out in Q1 2015 following a mid-2014 Kickstarter campaign. Here's an overview of the game:

Quote:
In Fidelitas, players take on the role of faithful citizens in a medieval city who are exerting influence in order to gain the credibility needed to lead the charge against the corrupt crown.

Players play character cards to various locations that make up the city in order to meet conditions of hidden objectives. Each type of character card is associated with a unique action that manipulates cards in the game: the Butcher bullies other characters to new locations, the Student gains more cards, the Soldier keeps the peasants from loitering too long, etc. In this game where keen maneuvering is key, attentiveness to the opposition may uncover hidden motives that seek to foil your bid for power.

The first player to gain a certain number points (depending on the number of players) is determined worthy to lead the revolt and also wins the game.

• Advance shots of Ignacy Trzewiczek's The Witcher Adventure Game are coming out of the CD Projekt RED & GOG.com Summer Conference and a BGG user has collected these Twitter images in this BGG thread.

• I mentioned in a June 5, 2014 post that Mercury Games will release a new edition of Fran Diaz's Polis: Fight for the Hegemony in North America in Q4 2014. What I didn't mention in that post is that original publisher Asylum Games will re-release Polis outside of North America, ideally making the game available to as many people as possible.

• And another follow-up: In a May 21, 2014 post, I mentioned that a large game titled ZhanGuo was the prime contender for a Spiel 2014 release by What's Your Game? ZhanGuo, designed by Marco Canetta and Stefania Niccolini, now has a BGG game page, so I present the long game description there:

Quote:
Between 230 and 221 B.C., the ambitious and extremely young king of Qin, Ying Zheng, unified China, adding all the other so-called Warring States (ZhanGuo) to his empire. Through this, Ying Zheng became the first emperor in Chinese history, taking the title of Qin Shi Huang Di.

Plenty of things had to change in order to make the Chinese empire whole, and Qin Shi Huang Di didn’t waste any time. He divided the empire into prefectures, personally appointing central and local functionaries; afterward, he decreed that the same writing symbols had to be used throughout the entire nation. Furthermore, he unified the laws and the units of measure, particularly the currency, creating amazing conditions for the economic development and growth of the empire.

Internal decisions were not the only things that shaped this new unified nation. From the North, the menace of the Hsiungnu barbarians kept shaking the empire, and Qin Shi Huang Di knew that the only way to stop that menace was to build one of the most ambitious buildings in human history: The Great Wall of China. Thousands of peasants left their fields to take part in the construction, not only of the Great Wall, but also of roads, channels, palaces, and majestic buildings that included the emperor’s mausoleum with the Terracotta Army.

In ZhanGuo, you are the emperor's emissaries, and you have been assigned the challenging task of contributing to the process of unifying the empire, helping to build the wall, the Terracotta Army, and all infrastructures needed. During the five rounds of the game, you must make the best of the few cards you get each round. You can play each card either on your own player board to increase your personal power in the empire, or on the game board to recruit manpower, construct buildings wanted by the emperor, call reinforcements from Qin, and move the armies from kingdom to kingdom.

Each player has to choose the best time and best way to play his cards in order to earn the emperor's favors. Careful, though, because trying to get too much power, or exploiting the workers for personal gain could increase dissatisfaction among the populace, and consequently increase the risk of uprisings in the newly added kingdoms. Whoever is able to make the greatest contribution to the emperor’s cause, while at the same time keeping the citizens placid, will be the winner.