Galaxy Trucker Gets September Release Date
We've all known for a long time now that Czech Games Edition was working on digital ports of both Galaxy Trucker and Through the Ages: A Story of Civilization. The big question was when were we going to see these realized on our iPads and Android devices?

Today, the folks at CGE revealed what's been going on and why the delay in Galaxy Trucker which we thought would be released by now.

Today we have an announcement that we believe many of you have been waiting for. You might have heard that we have been developing a digital adaptation of Galaxy Trucker for quite some time now. Some of you have asked us when it will be released and why it is taking so long. Today we want to answer both those questions.

When we started with development we said to ourselves that we wanted to make more than just a digital copy of the Galaxy Trucker board game. We want to make a game that will benefit from both the physical board game and its new digital environment. With Vlaada Chvátil designing and working with our developers, we faced challenges such as development for various platforms, flashier graphics, an awesome campaign career mode, a new turn-based building mode, and multiplatform online multiplayer support.

It’s the essence of CGE to make everything we develop as polished as possible. So although the game is almost ready for release now, we decided to revise and improve our online multiplayer system, because we believe that comfortable and stable multiplayer is essential for any digital boardgame implementation. To make sure the multiplayer works perfectly, we had to push back the release date to the beginning of September 2014. We will use this extra time to also improve and polish the other parts of the game. We are sorry for the delay, but we strongly believe it is worth it, as the upgraded multiplayer system will also benefit our next titles.

We are also proud to announce that the first of these future titles is Through the Ages. We are aware it is a long-expected title and one of the best-rated board games, and we are putting maximal care into it. We have decided to improve all aspects of the game:

We are doing new card design and illustrations. With the help of the online community that has been playing the game for years, we will rebalance some cards and adjust a few details for smoother gameplay. And we are considering including additional cards, for higher variability.

We decided to do all this work not just because of the digital version. Simultaneously, we plan to work on a new edition of the physical board game that will feature similar improvements. Both versions will be released once we are satisfied with them. Currently we expect that this will happen next year, so you can expect the new version of the board game at Essen 2015.

A note about the digital platforms: We are developing for multiple platforms, and the developmental versions can be played on iOS, android, and Windows. However, the Galaxy Trucker release date applies only to the iPad version. The other versions should follow, but it takes some time to prepare releases for various platforms.

As you can see, we have some really interesting things in preparation. We will keep you posted with additional information as development progresses.
Bottom line: Galaxy Trucker due in September of 2014.

More interesting are the changes and new version of TtA that they're working on for next year. I've already bought the physical game twice...guess there will be a third time now as well.

Vlaada also sent me some screens from Galaxy Trucker. The game is beautiful. I was lucky enough to play it a couple weeks ago and it blew me away. The app IS Galaxy Trucker. The real time elements all work beautifully and the app is riddled with the same humor that fills the rule book. I can't wait for this release, but I'm happy to wait to make sure it's perfect when it does hit.

He also threw in a couple TtA screens. The first shows how the Hanging Gardens will look in different stages of construction, and the second shows off some of the new card art (all the card art is being redone).

Here are those screens: 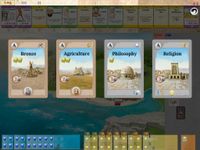