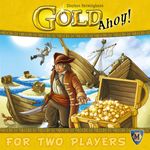 • Another day, another dude offering you a bunch of gems. I must be hanging out in the wrong places because I never encounter retailers like these in the real world; of course I'm not usually in the market for gems, so perhaps I just need to visit a jeweler for once to find someone thrusting gems toward me as if his hands were on fire. "Take 'em. Take 'em! TAKE 'EM!!!"

The Johari Bazaar, in case you didn't know, is a world-famous jewelry market in Jaipur, home to dozens of merchants practiced in the art of holding gems in their outstretched hands, and in Carlo Lavezzi's Johari you see whether you can earn more prestige than your fellow gem-holder-outers. Lookout Games will soon announce a release date for the German version of Johari in Europe, and Mayfair Games, which owns Lookout, should have Johari available at Gen Con 2014 in August as part of a Spiel 2014 preview for titles from Lookout. (Stephen Herminghaus' Gold Ahoy! should also be available for purchase and demo at Gen Con 2014.) I don't yet know whether other titles in Lookout's 2014 line-up — summarized in this BGGN post — will be present.) Here's an overview of how to play the game:

Quote:
The game lasts ten days, with players taking three actions each day. At the start of each day, the market is seeded with new gems, gold and prestige cards, with the stores holding only items of the same type and bazaar booths holding whatever comes to them. A new noble visits the market each day, offering a special power to whoever wants to pay for the privilege, with his price dropping each day.

Each player chooses one of the seven action cards in hand, then they resolve them in order of who has the most gold. They then do this twice more, getting discounts now for the cost of taking certain actions. The action cards let you earn gold, take all the cards from one store or bazaar booth, hire a noble, swap gems, protect yourself for inspections in case you have fake gems, copy your previously played action, or (most important of all) sell gems.

In addition to points from nobles and prestige cards, most of your score will come from gems that you sell — but you need to sell the right gems in the right way. When selling to a jeweler, you need to sell four different types of gems (or three types and gold), but you score only for one of the gem cards sold; when selling to a collector, you sell gems of only one type, but you have to hold the most gems of that type and you score only the difference between what you hold and what the player with the secondmost gems of this type holds. Status matters in the collector community!

Whoever has the most prestige points after ten days wins.

• Who Stole the Cookie? That's the question behind this Chris Castagnetto design from Victory Point Games, but really the name needs an "s" as you're trying to find the location of two cookies. Here's a rundown of this simplified Mascarade-esque party game:

Quote:
To set up, shuffle 2-3 cookie cards with 6-15 crumb cards depending on the number of players, then place two cards in the center of the table and deal two cards to each player, with everyone being able to peek at only one of their cards. On a turn, a player can:

• Peek: Look at any one face-down card.
• Switch: Switch the position of any two cards.
• Shuffle: Have someone shuffle the two cards in front of you, then look at one of them.
• Declare: Declare you know where two cookies are, choosing a card that you have or a card in the center of the table only if you can choose both of them. Secretly look at those cards, winning if you're correct and getting from the game if you're not. Find the cookies and you win! 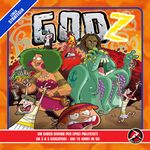 • In June 2014, Italian publisher Red Glove released GodZ from designers Diego Cerreti and Marco Valtriani, which focuses on the deities from the world of 2013's Super Fantasy: Ugly Snouts Assault instead of the heroes. An overview:

Quote:
A new world is about to arise. A horde of GodZ are battling to be the most powerful deity of the pantheon: Will you play the role of Tud, God of Mountains, Mud and Ugly Snouts? Or will you dwell in the ocean bottom with Glu, God of the Sea, of Fried Fish and of Octoguys? Whichever god you are going to incarnate, you will lay the foundations of your brand new cult, creating life, building temples and guiding your mighty Avatar amongst mortals. Lead your followers in epic, god-sized battles, and become the most powerful of the GodZ!

GodZ takes place on a modular, hexed board that is built up by players as the game proceeds. Victory can be achieved in different ways: controlling regions, conquering cities, fighting, building, or being adored by huge amounts of followers.

The heart of the game is the action system, based on a mechanism that allows players to perform miracles and actions, and even to directly score points, choosing your priorities carefully each turn: the more powerful your actions, the fewer points you will score when your followers pray to you.