A blog about solitaire games and how to design them. I'm your host, Morten, co-designer of solo modes for games such as Scythe, Gaia Project and Viticulture.
Recommend

Patron Badge for 2011 through 2020
One of the most flattering things that has happened to me while doing this blog was when published game designer Wes Erni told me that my blog had influenced his work. One post he highlighted was this one: Variation or tenseness?.

Wes told me that in the game Mound Builders, which he codesigned, he tried to work on achieving both variation and tenseness. This made me think about the issue again and it occurred to me that three other games that I’ve been playing lately showed perspectives on my thesis that I hadn’t thought about when I wrote the original post.

In my original post on variation vs. tenseness I used two games from the States of Siege series as examples: Soviet Dawn (SD) and Legions of Darkness (LoD).

The States of Siege games are tower defense games where enemies are marching down a set of linear tracks towards a central location that you must hold. Each turn you reveal an event card and you get a number of actions to try to push back the enemy armies and do other things to improve your situation. 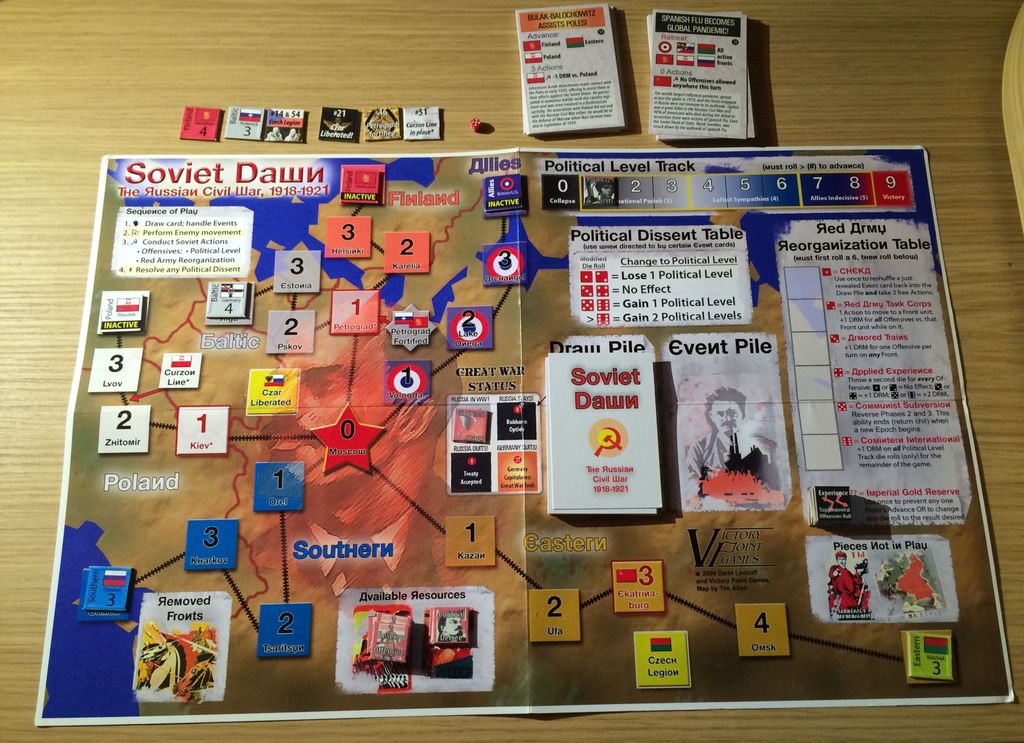 Since both SD and LoD are States of Siege games they share these same basic traits, but they are completely different in relation to the variation vs. tenseness thesis. SD has variation by the truckload when considering its simplicity and static board, but its tenseness is all over the place. Sometimes the game is a quick cakewalk, other times it’ll grind you to your constituent particles if you so much as throw a glance its way. LoD, on the other hand, is samey but the tenseness of the game is pretty fixed.

During my initial plays, LoD was extremely tense, but as I learned the game I found that if played well it becomes quite easy. Therefore, in the out of the box version it’s actually not that tense, but with small changes it can become so again, so I’ll stick with it as an example. 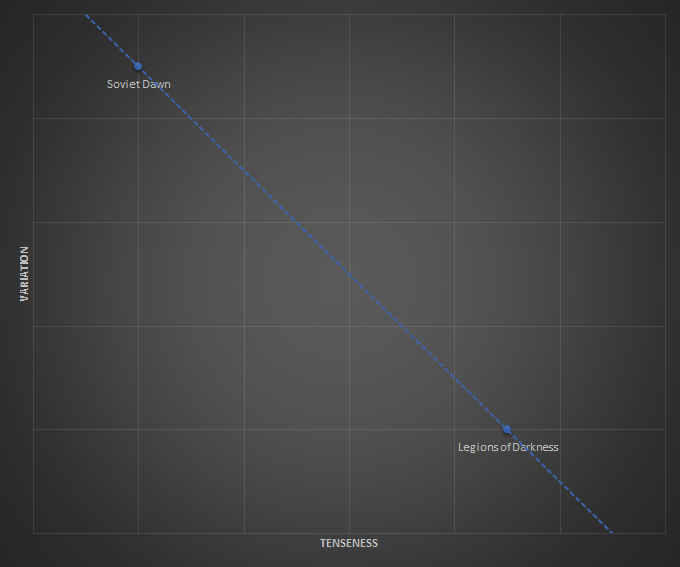 Now my thesis is that it’s very hard to make a game that go much above the line between the two games in the plot above. Furthermore, I was of the opinion that well designed games would cluster around the line, and bad games would be in the lower left part. Personally, I prefer games that goes toward the right, i.e. high tenseness, since to me tenseness is often at the heart of a good board game experience.

But then I met some games that challenged my opinions. One of these was We Must Tell the Emperor (WMTtE), which also belongs to the States of Siege series, which is helpful because the shared mechanics between the games make it simpler to see what differences it is that makes the games show up in different parts of the variation vs. tenseness diagram.

When neither tenseness nor variation is the goal

WMTtE has you controlling Japan’s Pacific Theater efforts on a high level from the Pearl Harbor attack and until the end of war. At the beginning of the game you’re in a strong position, you can easily hold back your opponents, and make the position even stronger. Later on your enemies grow powerful and aggressive, and you’ll inevitably start to lose ground.

The game is divided into three acts, each act has a separate deck of event cards, and for four of the cards you know exactly what turn they’ll be coming.

Putting all this together we get a game that’s more tightly scripted than the others we’ve discussed, which makes the tenseness curve very similar from game to game, following an arc of starting with very little tenseness for the first half of the game, which then ramps up dramatically towards the end.

This means that WMTtE is both fairly low on tenseness and variation and thus fall below the line in the diagram (you may disagree with my subjective placement of the games in the diagram, but the exact placement isn’t important to my points in this post). 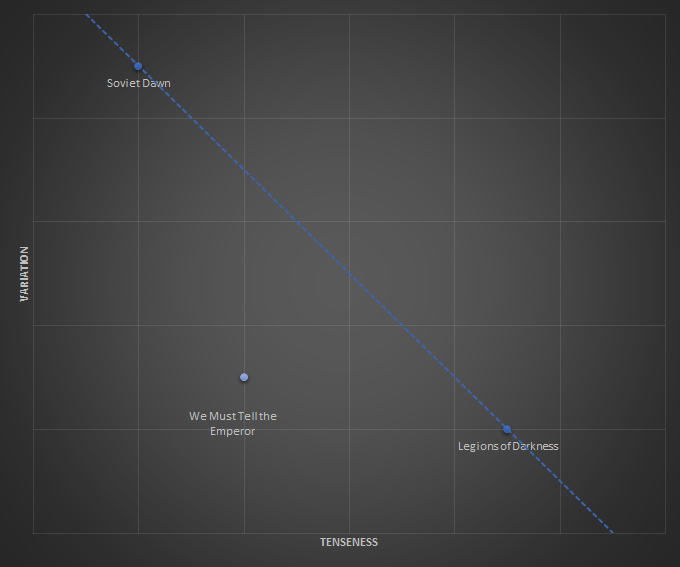 This would seem like a bad thing – and if you’re just concerned with getting a game, then it is a bad thing, but the design goal for WMTtE is more than that. The designer, Steve Carey, puts it this way:

”Steve Carey” wrote:
a key element of the design, namely placing the player squarely in the role of Japan with an emotional anchor.

Experience the euphoria of running amok in the early war deck, the shock of having your juggernaut stopped in the middle war deck, and then enduring the crushing blows of the late war deck.

Winning or losing was never a major consideration for me (though who doesn't like to win, so we had to keep things at least semi-reasonable), it was mostly about capturing the emotional impact of the war on Japan and transferring as much of that as I could to the player in the span of an hour.
Source.

So, while my initial thought was that games falling much below the lines would be bad games, I must say that Steve Carey changed my mind on this with WMTtE, because he really succeeded in conveying the feel of the Japanese situation and the game taught me about the war in the Pacific. So while the fact that the game is not that varied and only tense during the last part means I probably won’t be playing it a bazillion times I still felt that it was a good game because of the story it told and the theme it conveyed.

The lesson here is that there are other valid design goals than trying to stick close to the variation-tenseness line, and telling stories and conveying “feel” is one way of doing that.

The right is not always right

As mentioned above I personally see it as the best to stick to the right part of diagram (high tenseness), but WMTtE challenged this view, and the two other the games I mentioned previously showed me that a third design goal that goes away from the right side is also valid: Simulation and sandboxes.

The two games that did this was The South Shall Rise Again (TSSRA) and Astra Titanus (AT). Let’s take a quick look at them before talking about what I learned from them. 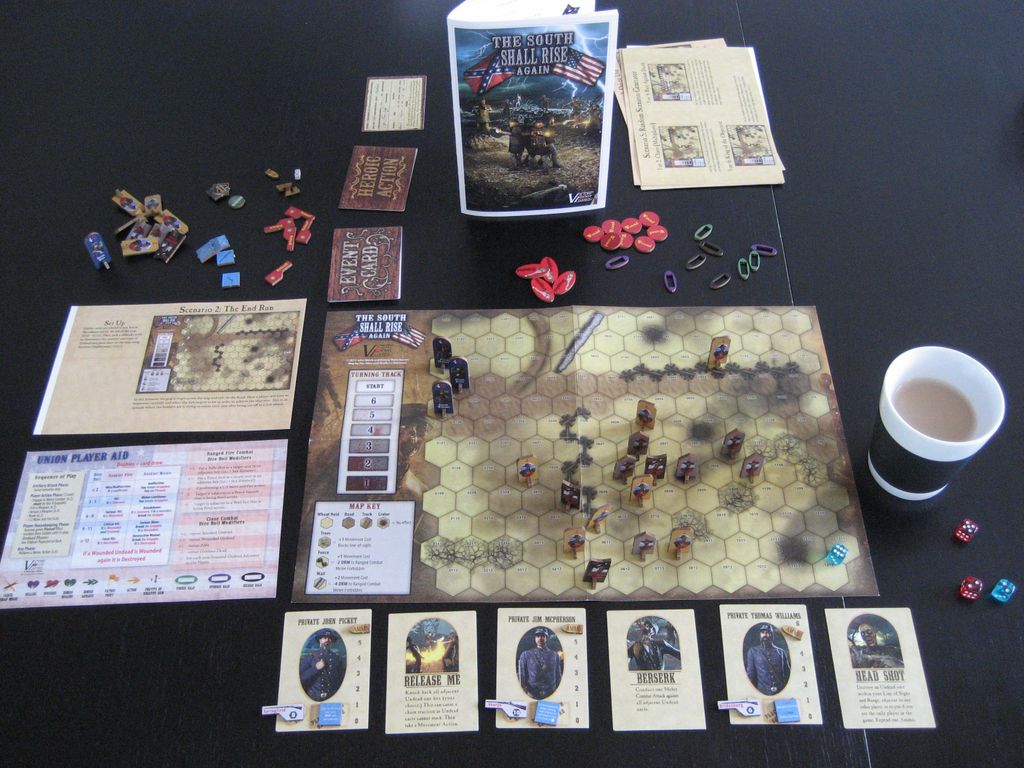 TSSRA is a game about the American Civil War with the twist that the Confederates use zombies. It’s a small tactical level hex and counters (or rather hex and standees) wargame that is easily playable even for those of us who’re not grognards. In most of the built-in scenarios you start out with 1-4 soldiers facing off against a horde of zombies already on the board. This starting setup means that you’re almost immediately under a lot of pressure, and if you lose soldiers early you can face a quick fallaway loser spiral, though there are some one-shot heroic abilities that helps a bit with this. If on the other hand you do well initially, the zombies’ power will decrease quicker than yours.

Furthermore, zombies generally aren’t known for their intelligence, but rather for their lack of it, so their movement is very predictable straight lines towards you. This means that once you thin the zombie hordes enough you can kite them around the board without getting in any real danger except for an occasional event card, which is a slow and not very interesting exercise.

The game’s way of countering this is to set scenario goals for you, but except for when there’s a time limit the way to get a high score is to kite slowly and methodically, other than that there are the aforementioned random events, but they come too seldom for them to keep up the tenseness for me.

While TSSRA have you controlling a few superior game pieces against a horde of lesser ones, the second game, Astra Titanus, has things the other way around. It’s a sci-fi game where you control a fleet of space ships that must try to stop one or two giant computer controlled “Titans”. The Titans can soak up hits like there’s no tomorrow, but they get weaker and weaker as they do so. Your ships on the other hand are fragile, but you’ve got a lot of them, so the effect is the same: You can take a lot of punishment, but your fleet gets weaker turn after turn. Thus the game becomes a race between the weakening of your fleet and the weakening of the Titan(s). The problem is that once one side in the battle gets weakened more than the other it’ll be able to do less damage than its opponent, which will make it fall even further behind, and thus the game can suffer from Runaway Leader Syndrome and Fallaway Loser Syndrome.

So both games can turn out very differently from one play to the next, but neither of them have the game changing features of Soviet Dawn, where one event can complete change the game, so they don’t achieve the level of variation that it has. 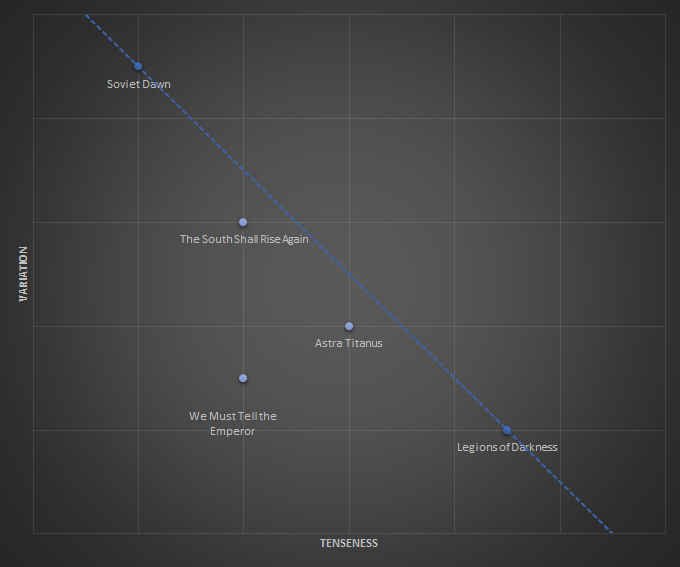 The two games have little in the way of balancing mechanisms, so sometimes you completely beat up the opposition and other times it completely trashes you, and often the games continue for quite a while after it’s clear who’s going to win, so as the player you’ll be “playing out the proof” of the foregone conclusion.

Now I’d generally see this as a bad thing, but these two games made me realize that games that games that setups up a scenario and use “realistic” rules to see what’ll happen can also be quite interesting. I’ve put the word “realistic” in quotation marks, since we’re talking about a game of space ship combat and a game with zombies in the American Civil War, so we’re not exactly talking real life scenarios here. What I mean by “realistic” is that the game rules makes reasonable sense if one accepts the fantastical scenario. We’re talking about games that to some extent simulates something and sets up sandboxes where you can experiment with what-ifs.

This type of simulation or sandbox game has tenseness as a secondary goal. It’s nice to have, but it’s more important to keep the simulation real. There are generally very little in the form of mechanics that pulls the game back towards the tense area, e.g. rubber banding mechanics, and while tenseness is fun and helps with keeping the game’s narrative exciting, mechanics that keep games tense easily risks looking gamey, which actively hinders the player’s suspension of disbelief. Seen from that point of view simulation games can actually be better at generating engrossing narratives than more tense rubber banded games, and thus they can be good games without being on the right side of the diagram.

Going for the upper right

As mentioned this post was triggered by Wes Erni and a game he codesigned (Mound Builders), and you might reasonably wonder why I haven’t talked about that game yet. I can honestly say that it was my intention to talk about it this post, but it turned out that I had so much to say about the other games in relation to the variation vs. tenseness tradeoff that it turned into a post of its own. I do promise however that I’ll soon do a post on whether I think that Wes achieved his goal of marrying variation with tenseness