September! Football is starting up, school is back in session, convention season is shifting from Gen Con to Spiel, fall is in the air, so why not head to Kickstarter and buy some games for Christmas... 2015-ish.

I hope everyone had a great Gen Con. It was awesome, and I played a lot of great games! I also played Amazonas which was a complete and utter turd, despite being from Mayfair Games and one of my fav designers Stefan Dorra. I mean, it SUCKED. Hard. The point is that there are plenty of crappy games that didn't come from Kickstarter! I paid $8 for it off the clearance rack and overpaid. By double. (Editor's note: ?!? —WEM)

• Coconuts Duo is the latest in the Coconuts line from Mayday Games via original publisher Korea Boardgames, a.k.a. Divedice. (KS link) It's a crazy dexterity game in which you pull a spring-loaded monkey arm in an attempt to make the aforementioned coconuts land in buckets. It is stupid silly fun. I know W. Eric likes it, but I have always questioned his taste in games, so check it out for yourself. I am not sure if this is just ½ the original game in a smaller box or if there are actually different rules. Dunno. Maybe W. Eric can enlighten us since I am sure he used his mystical BGG News guy powers to score a free copy.

More Convenient Box Size: The game packaging is smaller and the setup and storage is all about half of the original game! You can actually still play a 3/4 player game if you don't mind sharing monkeys, and who doesn't like sharing monkeys?

All New Cards: Duo comes with all new cards with even more special abilities and attributes, as well as a couple of the best of the original game! These cards are NOT available in the original game or anywhere else BUT Coconuts Duo!

Green & Brown Coconuts Come Standard: The original game came with just brown Coconuts, but this one comes with brown for one player and green for the other. Sure, you can play with the same rules as ever, but you can mix it up too, with a greater choice of colors your ability to implement house rules and variations is increased!
Looks nuts. Hey-oh! 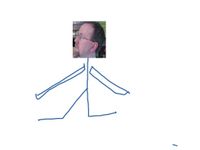 • Monstrocards is a party game from White Whale Games. (KS link) This is a cute idea. Not sure it's a game per se, but it is a pretty dang funny idea. Looks like you get two descriptive words, then draw a monster card accordingly. Then there is a resolution of some sort. Voting, I think. I will check. The only issue I see is that all my monsters would look the same.

Quote:
Do you like card games or monsters or drawing pictures or making jokes or having a good time with other people? Then you might like
Monstrocards, a party card game in which players quickly create their own cards and pit them against other players' cards in a series of duels. Because you don't have much time to create your deck, what comes out is often weird, sometimes creepy, and usually hilarious.
Ahh, voting! Always fun.

• Hands down my favorite game name of the month is Hogger Logger from the aptly named Hogger Logger LLC.
(KS link) Yup. Hogger Logger. I think my buddies used to play this game in college, but it had different rules...and more beer. Either way. Apparently, this is different: "Hogger Logger is a fast-paced, cutthroat card game with lumberjacking pigs." Hogger Logger features a pig woodsman and some simple gameplay, so that is different. Go check it out and see if you want to do some hoggin'.

Quote:
In Hogger Logger, the premise is simple. The strategy is schadenfreude. As the "guesser", you must guess whether the next number card is higher or lower while using the cards in your hand to either help yourself or hurt your opponents. But watch out! Your opponents can also play cards and steal cards to change your odds.

The round starts with four face-down cards. You win by being the player to correctly guess the last remaining card. Here's the tricky part: Only one player can be the guesser and each time there is an incorrect guess the guesser rotates one spot to the left!

In Hogger Logger, you must know when to swine-and-dine your opponents and when to cut them down. Make your guess, knock on wood, and go hog wild in this exciting game of highs and lows.
In some ancient cultures, pigs were the primary form of currency. In case you were wondering. 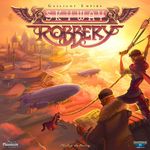 • The very prolific Phillip DuBarry is back on KS with crowd favorite Game Salute at the helm to bring you Skyway Robbery. (KS link) In the past, I speculated that the gaming world would end if ever there were a month without a Richard Launius game on Kickstarter. Well, the Duke of Dice has given way to the Lord of, errr, Lots-o-games Phillip DuBarry. This guy seems to always have something in the works. I witnessed a playtest of Skyway Robbery at Gen Con and it looked interesting. It is also very, very pretty.

Quote:
In Skyway Robbery, you are a passenger on a gigantic airship cruise liner on a tour that will take you to the far corners of the Gaslight Empire. You are also an up and coming criminal mastermind seeking to build a reputation as a kingpin of crime. As the airship progresses to various exotic locales, amazing criminal opportunities will unfold before your eyes. Your task is to assemble the best gang of professional criminals, conduct daring robberies, elude various defenses and protect your turf from other nefarious crooks skulking in the shadows. Earn the most feared reputation and take your rightful place at the top of the criminal world.
I don't know how much Jacqui Davis charges for art, but she should double it.

• Minion Games is back with the latest from Kane Klenko: Dead Men Tell No Tales. (KS link) I LOVE that cover. It is awesome pirate and ship fantasticness. So cool. I have not had a chance to look into the game a ton, but I intend to even if Kane Klenko sounds like the name of a villain from a 1980s karate movie. I have exchanged mesages with Kane a time or two, and he seems like a really good dude, but it is hard to say from Geekmail whether or not he has a vaguely Russian or Eastern Euro accent and an eye patch, so buyer beware.

Quote:
Dead Men Tell No Tales (DMTNT is a co-operative game in which players take on the role of a pirate crew, boarding the doomed Skelit's Revenge for one purpose: to take the loot. You need to deal with the spreading fire and explosion potential as well as the enemies left on the ship. But what's a little risk for the plunder!

Each round you flip over a new tile to add to the ship and you also flip a card to show where the Skeleton Crew advances. You may then take a number of actions and use shared equipment to deal with the fire, your own fatigue, the trapdoors and guards on the ship. In DMTNT you can even pass some of your action tokens to the person to your left in case they need extra help this round.

Simple to resolve combat feels engaging without taking more than a quick die roll. You will be constantly gaining fatigue and you must manage your ability to keep going.
Cool character art, too!

Gen Con. Sigh. It is like gamer summer camp for adults — and I miss it already.

See you in a month, and remember that if you have any questions, shoot me a Geekmail or post it in here. Complaints and/or rants can be directed at W. Eric. It was likely his fault anyway.

Editor's note: Please don't post links to other Kickstarter projects in the comments section. Write to me via the email address in the header, and I'll consider them for inclusion in a future crowdfunding round-up. Thanks! —WEM