In life you have to do a lot of things you don't f*cking want to do. Many times, that's what the f*ck life is... one vile f*cking task after another.
Patron Badge for 2007 through 2020
Galaxy Trucker Released 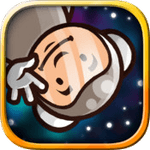 I know that Brad will be posting a review ASAP, but I'm going to throw my review in right here.

Let's get you the iTunes blurb:

Can you build a space ship from sewer pipes? Are you willing to face meteors, pirates, and smugglers? Can you fly a five-engine ship after four engines have been destroyed? Then you are our kind of trucker!

Galaxy Trucker, the award-winning board game by Vlaaďa Chvátil, is landing on your iPad! Build space ships, dodge meteors, and fight off bad guys, all in a quest to be the trucker with the most cosmic credits at the end of the game.

This digital version can be played with up to three other players, either online or on one shared iPad. A turn-based building system designed especially for this app allows pass-and-play or asynchronous online play. You can also play real-time games online using the traditional building method of grabbing stuff and attaching it to your ship as fast as you can.

For solo play, the app offers a dozen AI personalities and a special campaign mode in which new players can learn the game and experienced players can discover new challenges. The non-linear storyline offers hours of trucking fun as you meet quirky characters and explore the Galaxy.

So head to the space station, grab the best components, and build a great-looking ship ... ideally one that can reach its destination. You'll need cannons to fight off bad guys, shields to protect you against meteors, engines to rocket ahead of the other players, and lots and lots of cargo containers to hold all the goods you pick up along the way. It's time to become a galaxy trucker!

- epic trucking campaign written by Vlaada
- online quick duel
- asynchronous or real-time online play
- multiplayer single-tablet pass-and-play
- 12 AI personalities for solo play
- real-time or turn-based building
- autopilot for faster flight
- 81 achievements
- no in-app purchases
You can download it for $5 right now on the App Store. That $5 is a special introductory price, too, so don't wait. It will only be $5 for the next two weeks.

Android user? Don't worry, it's coming out for Android devices before the end of the year.

Get out of here and go download it! You will not regret it.